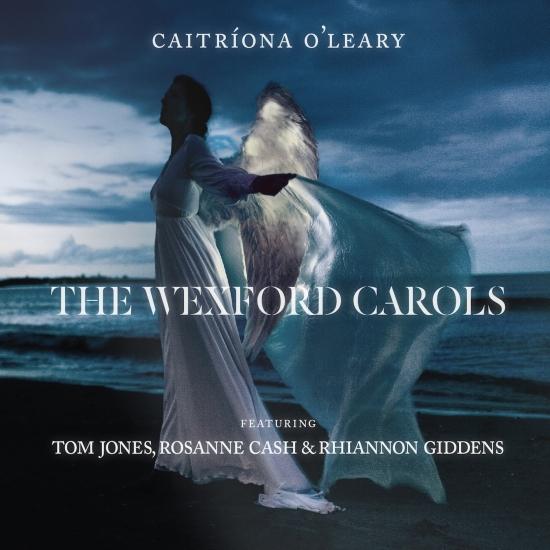 Starring the celebrated Irish singer Caitríona O’Leary and featuring Grammy winners Sir Tom Jones, Rosanne Cash and Rhiannon Giddens, The Wexford Carols presents Ireland’s greatest Christmas music (much of it for the first time) in a recording that magically blends a diversity of folk styles including traditional Irish, Americana, Blues and Gospel.
With lyrics by Luke Waddinge and William Devereux and set to popular tunes of the day, these musically sublime, spiritually rich, and emotionally powerful carols from the 17th and 18th centuries will give listeners a entirely new and compelling way to experience the story of Christmas.
The carols represent Ireland’s greatest homegrown Christmas music and perhaps the last major collection of folk carols in English yet to be recorded and introduced to the public.
Featuring O’Leary’s captivating singing along with Jones, Cash and Giddens, the album was produced by four-time Grammy winner, Joe Henry. Mr. Henry’s vision for the recording was to create an intimate, real-time ensemble album that integrates a diversity of related folk traditions (including Irish Traditional, American Roots, Gospel, Blues) with the goal of communicating the beauty, accessibility and spiritual power of this unique and compelling repertoire.
The Wexford Carols is in fact two collections of carols plus the famous Enniscorthy Carol (sometimes recorded as The Wexford Carol). The earlier collection, by Bishop Luke Waddinge, was first published in 1684 and is comprised of eleven poems. The later collection, completed in 1728 by Fr. William Devereux, also contains 11 poems. Both Waddinge and Devereux’s lyrics were set to popular Irish and English tunes of the period. These sublime songs, composed in post-Cromwellian Ireland, a time when the Catholic population suffered harsh religious persecution and severe hardship, formed the basis of a long-standing tradition of carol singing in County Wexford.
While the tradition stretches back hundreds of years and continues to the present day in the Wexford parish of Kilmore (the carols are sometimes collectively referred to as The Kilmore Carols), only a small number of the carols are still performed there. In fact, only six of the original melodies are extant and most of the carols are sung to the same three tunes.
Caitríona O’Leary’s fascination with the carols led to a long period of research and investigation during which time she discovered many of the lost melodies. This recording introduces twelve of the most beautiful carols and presents them with their original melodies.
The Wexford Carols express religious, metaphysical, social and political ideas used to tell the Story of Christmas. Through highly descriptive and deeply felt poetry the carols depict the Prophecy, the Annunciation, Mary and Joseph’s Journey to Bethlehem, the Birth of Jesus in the Stable, the Star, the Angels and Shepherds, the Three Wise Men, the Flight to Egypt and the Slaughter of the Innocents. The carols are emotionally expansive and explore a wide range of feeling moving from a lament on the prohibition of the Mass in 1678, to a philosophical mediation on the reconciliation of opposites, to an exuberant celebration of Christmas.
The Wexford Carols was recorded between the 21st and 25th of July 2014 at Grouse Lodge Studios, an isolated residential recording studio deep in the countryside of County Westmeath, Ireland. The area is known for its ancient historic and mythic connections and was the seat of the High Kings of Ireland.
This is easily the year’s most ambitious undertaking…” (Randy Lewis, Los Angeles Times)
“O’Leary, Cash and Giddens’ solos are captivating and the ensemble singing is special.” (Joe Breen, The Irish Times)
“The sounds captivate the ear.” (Michael Johnson, Facts & Arts)
Caitríona O’Leary, Voice
Tom Jones, Voice
Rosanne Cash, Voice
Rhiannon Giddens, Voice, Fiddle, Minstrel Banjo
Adrian Hart, Fiddle
Eamonn de Barra, Flute, Whistle
John Smith, Guitar, Mandola, Voice
Dónal Lunny, Bouzuki
Kate Ellis, Cello
Greg Cohen, Double Bass
Mel Mercier, Bodhrán, Bones
Graham Hopkins, Drums, Voice
Recorded 21st – 25th July 2014, Grouse Lodge Recording Studios, Westmeath, Ireland
Mixed and Mastered August – September 2014, Stampede Origin Studio, Culver City, California
Recording Engineer, Mix and Mastered by Ryan Freeland
Produced by Joe Henry