For Once In My Life (Remaster) Stevie Wonder 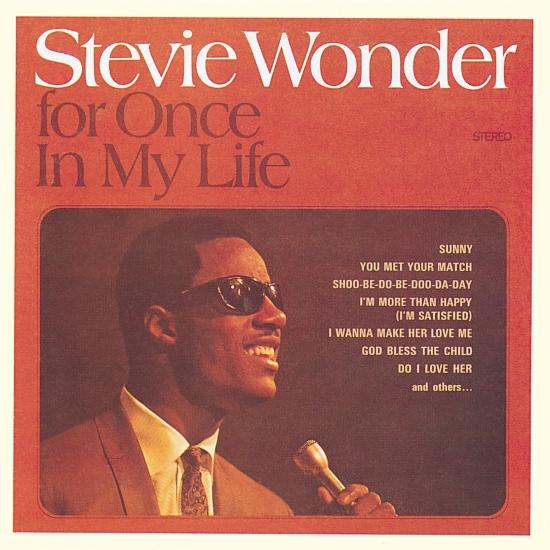 Info zu For Once In My Life (Remaster)

A lush, energetic recording, „For Once In My Life“ sees 'Little' Stevie Wonder singing a workout's worth. Not to be confused with the more broadly creative Stevie of later years, this is the vintage singing-sensation Stevie. It's a thrill to hear. While the studio instrumentation is standard fare for the time, Wonder plays happily off the backing with saucily bent notes and hearty falsettos that make these pop tunes wail.
The overdubbed vocal harmonies on tunes like 'You Met Your Match' make for the kind of hard-grooving hooks that would populate many other Wonder albums to come. 'I'm More Than Happy' is a sweet, slow treat with a conga-pumped feel akin to many Marvin Gaye cuts of the same period. While the sultry wash of strings seems at times to push Stevie to more fervent singing, its absence elsewhere allows for more of his subtleties to emerge. A silvery solo on the harp lends a welcome touch to the plus-size arrangement of 'God Bless The Child.' The former Little Stevie wants to take you to a world of funky Motown lovin'--why not let him?
„Rather than rushing out an album in the spring of 1968, when 'Shoo-Be-Doo-Be-Doo-Da-Day' (Number 9 Pop, Number One R&B) hit, Motown waited, through the modest summer success of 'You Met Your Match' (Number 35 Pop, Number Two R&B), until 'For Once in My Life' (Number Two Pop and R&B) became Wonder's next mammoth single, to release an album. As a result, this album contained all three hits, making it one of Wonder's more consistent albums of the '60s, even with filler like 'Sunny' and 'God Bless the Child.' The real find, however, is the driving 'I Don't Know Why,' which, when placed on the B-side of Wonder's next single, 'My Cherie Amour,' became a hit on its own, going to Number 39 (Pop) and Number 16 (R&B).“ (William Ruhlmann, AMG)
Stevie Wonder, vocals, harmonica, keyboards
Benny Benjamin, drums
Produced by Henry Cosby, Don Hunter
Digitally remastered