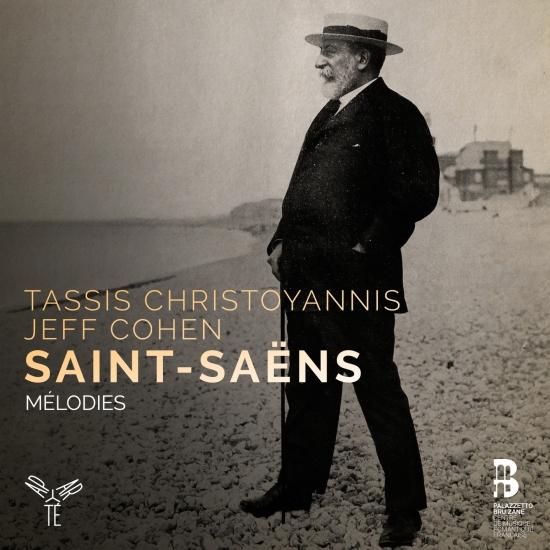 Fourth volume in the collection devoted to the French art song, currently being realised by the Palazzetto Bru Zane in collaboration with the Aparté label (1: David, 2: Lalo, 3: Godard).
Camille Saint-Saëns, a legendary figure of Romanticism, composed more than 150 mélodies, reflecting his love of poetry and the French language.
At the heart of this catalogue, four cycles stand out, falling perfectly within the golden age of French song (1870-1920). The first cycle, the Mélodies persanes (1870), sets to music the loveliest poems by the Parnassian poet Armand Renaud (Nuits persanes). La Cendre rouge (1914) bears witness to a close collaboration with Georges Docquois, the Cinq mélodies de Ronsard and Vieilles Chansons, composed the very year of his death (1921) are settings of Renaissance poets: Ronsard, Belleau, de la Fresnaye, and d'Orléans.
„May music and poetry someday understand that they would be well advised to lean on each other! May poets learn music and musicians study poetry! They have everything to gain. Musicians must be firmly convinced of the truth that a beautiful verse is not a simple pretext for music; it is a diamond that the musician must set as best he can, to show it to full advantage. As for poets, one day they will notice that music makes possible all sorts of combinations that are forbidden to them without it.“ (Camille Saint-Saëns)
Tassis Christoyannis, baritone
Jeff Cohen, piano

Tassis Christoyannis
Born in Athens, baritone Tassis Christoyannis began piano lessons at the age of 9 and at 17 he joined the Athens Conservatory, where he studied singing conducting and composing. From 1995-1999 he was a member of the ensemble at the Greek National Opera in Athens.
Future engagements include Germont (La Traviata) at Royal Opera House Covent Garden, Chorebe (Les Troyens) in Geneva, Posa (Don Carlo) in Strasbourg, Falstaff (Tour with BFO Ivan Fisher), Title part in Simon Boccanegra in Bordeaux, Titel role of Ali Baba by Lecocq in Rouen, Winterreise by Schubert in Athen...
He has recently been heard in Michele and Gianni Schicchi in Il Trittico in Tours and Duparquet (Ciboulette) in Paris Opéra Comique, Jeletski (La dame de Pique) in Strasbourg, Posa in Bordeaux...
Between 2012 and 2014, he sang Danaüs (Les Danaïdes by Salieri), Don Giovanni in Tours, Figaro (Il Barbiere di Siviglia) at the Vienna State Opera, Germont (La Traviata) in Genève and Nantes, Posa (Don Carlo) in Frankfurt, Renato (Un Ballo in Maschera) in Tours, Egée (Gossec’s Thésée) in Liege and Versailles and Macbeth in Athens, Germont (La Traviata) at the Glyndebourne Festival, Marcello (La Bohème) in Paris Bastille.
In February 2012, he sang a well-received Macbeth in Bordeaux. The following April, he sang Silvio (Pagliacci) and Figaro (Il Barbiere di Siviglia) in Paris and in Genève in September.
In March 2011, he sang Ford (Falstaff) in Nantes, and in May he was heard as Monfort (Les Vêpres Siciliennes) in Genève. The following September he sang Valentin (Faust) in Paris. In January 2010 he sang the leading role in a world premiere in Athens, then sang Don Giovanni in Budapest under the baton of Ivan Fischer. Also in 2010, he sang Oreste (Andromaque by Grétry) in Schwetzingen, Montpellier, and Nürnberg. He also sang Posa (Don Carlo) in Frankfurt, and Figaro (Il Barbiere) in Genève.
In January and February 2009, he sang the title roles in Ulisse and Pelléas et Mélisande in Düsseldorf, followed by Ford (Falstaff) (V.Jurowski / R.Jones) at the Glyndebourne Festival, Oreste (the revival of Andromaque by Grétry) in Paris and Bruxelles. In December 2009, he sang Figaro (Il Barbiere) in Rouen.
Between January and May 2007, he sang in Lucia in Düsseldorf, Fautszenen (Schumann) in Athens, Lucia in Tours, Hamlet and Don Giovanni in Düsseldorf. In September 2007 he was heard as Olivier (Capriccio) at the Paris National Opera. The following November he sang Enrico (Lucia) in Amsterdam, and Falke (Die Fledermaus) in Lausanne in December. In 2008, he sang Germont in Düsseldorf, Figaro (Il Barbiere) at the Berlin State Opera, Alfonso (La Favorita) in Montpellier, Posa (Don Carlos) in Düsseldorf. He also notably sang Guglielmo (Così) under Ivan Fischer in Las Palmas and Budapest.
In 2006, he sang the title role in Hamlet in Düsseldorf, then Ford (Falstaff) and Enrico (Lucia di Lammermoor).
In December he made his debut in Brussels at the Théâtre de la Monnaie as Germont (La Traviata). In 2005 he sang Il Ritorno di Ulisse in Patria in Düsseldorf, followed by Papageno, Posa (Don Carlos) and Bajazet (Tamerlano) in Athens. He ended the year with a critically acclaimed Figaro (Barbiere) at the Staatsoper Berlin.
Beginning in 2000, as a leading baritone at the Deutsche Oper am Rhein in Düsseldorf, he sang: Posa (Don Carlos), Germont (La Traviata), Enrico (Lucia di Lammermoor), Conte (Le nozze di Figaro), Don Giovanni, Figaro (Il barbiere di Siviglia), Dandini (La Cenerentola), Taddeo (L´Italiana in Algeri), Silvio (I Pagliacci), Ulisse (Il ritorno d´Ulisse in patria), Guglielmo (Così fan tutte), Oreste (Iphigenie en Tauride) and Eugen Onegin.
As a member of Greek Opera house (1995-1999) he sang Belcore (L´elisir d´amore), Don Carlos (Ernani), Papageno (Die Zauberflöte), Figaro (Il Barbiere di Siviglia), Guglielmo (Così fan tutte), and the title role in Eugen Onegin.
In 1993 he studied Italian repertoire in Cremona under the Italian baritone Aldo Protti. In 1994 he was awarded the Aldo Protti Golden Medal and in 1995 won "First Honorary Mention" at the Maria Callas International Singing Competition.