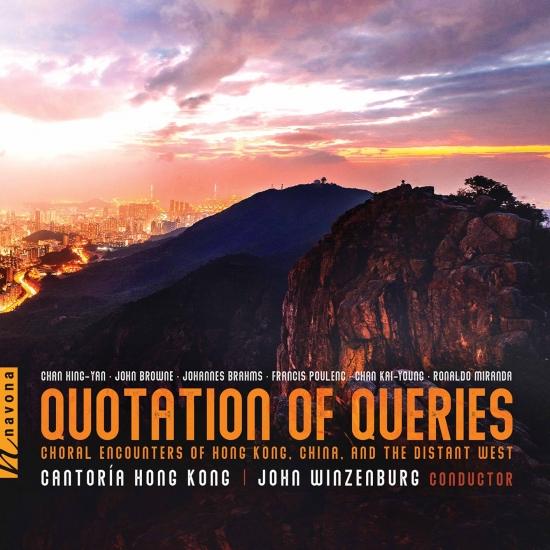 Info for Quotation of Queries: Choral Encounters of Hong Kong, China and the Distant West

Fresh from Navona Records comes QUOTATION OF QUERIES, featuring the students of Hong Kong Baptist University under the direction of Professor John Winzenburg. This collection of choral music explores notions of culture throughout the course of human civilization. It features traditional compositions, recent works, and even three debut recordings by prominent composers from Hong Kong and the United Kingdom.
The album opens with “Prelude,” the first movement of Quotation of Queries by composer Chan Hing-Yan. We hear the knocking of a piano, and the sudden, vigorous vocalizations of the Cantoría Hong Kong. The music, which is set to classical Mandarin poetry, pairs Chinese folk traditions with dissonant modern sonorities. The translations of these “queries” include “What do you think human life is like here or there?” and “When can I just ignore the encumbrance?” Next comes John Browne’s setting of Aeschylus’s The Suppliant Woman, which borrows from both classical Greek drama as well as modern theater, with the chorus assuming the role of the story’s protagonist. Later on, we hear excerpts from Brahms’s 11 Zigeunerlieder (Gypsy-Songs), Op. 103, which offers a 19th century take on the challenge of blending of cultures through music. These are just a sampling of the album’s stylistic range.
Those who listen to QUOTATION OF QUERIES will find themselves immersed in a deep pool of cultural and musical traditions, as curated by Professor John Winzenburg. These recorded expressions of powerful emotion told through a myriad of musical scales and languages, perhaps counterintuitively, confront the listener with our common humanity across time and space. Listeners should be warned, however, that they too may be left with more questions than answers.
Cantoría Hong Kong
John Winzenburg, conductor