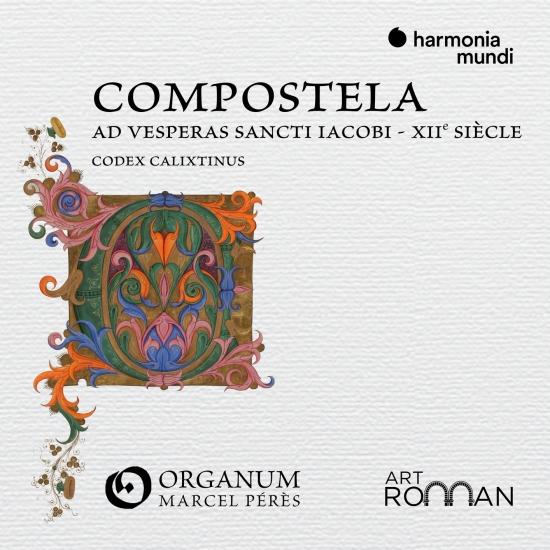 Since the ninth century, the routes to Santiago de Compostela leading to the sanctuary of St. James have attracted countless pilgrims and exercised a potent mystique. What has received less attention is the music originally sung during the services in honour of the saint. Thanks to Marcel Peres’s in-depth study of the Codex Calixtinus, preserved at the Cathedral of Santiago, this recording can present a reconstruction of the musical gems contained in the rare twelfth-century manuscript which attests to multiple stylistic influences encountered on this indispensable and all-embracing pilgrimage.
"Compostela ad Vesperae Sancti Iacobi (Compostela at the Vespers of the Feast of St. James) is a curiously presented disc. The cover and booklet are sumptuous, with gorgeous architectural details from the structures at Santiago de Compostela, a UNESCO Heritage Site and the third most sacred place in Christendom. Much is known of this place and its history and lore, going all the way back to a group of devotees in biblical times who stole the body of St. James and drifted with the tides until they came to Spain. Pilgrims of many faiths and background have been drawn to the Camino de Santiago, and the twelfth century Codex Calixtinus manuscript, from which the music on this disc was taken, also includes descriptions of the road and has been called the history's first tourist guidebook.
One might think that the album, then, was addressed to any listener with an interest in this splendid remnant of the medieval world or in its continuing spiritual significance. One would be temporarily disabused, though, by the liner notes, which nobody without graduate-level training in medieval music could hope to understand -- and they'll be challenging even for those with such training. Quick, what does "the melody is non-diastematic" mean? No peeking in the Grove dictionary, now! Look it up online and you get something about the gap between your front teeth (no kidding).
Which leaves us with the music, and here fortunately things get back on track. The music consists of chant and very early polyphony, most of it in two parts. The monks who created this early polyphonic music, known as organum, first began to sing a second line in parallel to a chant, and then to lengthen some of the notes of that second line. The performers on this disc, Ensemble Organum, accomplish a beautiful re-creation of how this might have sounded in Compostela at the time. When they perform monophonic chant, they use a certain amount of what we call rhythm, rejecting the floating, unmetered style of chant performance as a modern invention. This makes the more rhythmically organized organum seem closely related musically, and the singing of this choir of male Spanish chant revivalists is forceful and precise. If you took a college music history class and found the organum tough going, or if you're headed for Santiago de Compostela, check this disc out for a careful reconstruction of how the music of the twelfth century might really have sounded." (James Manheim, AMG)
Ensemble Organum
Marcel Peres, direction