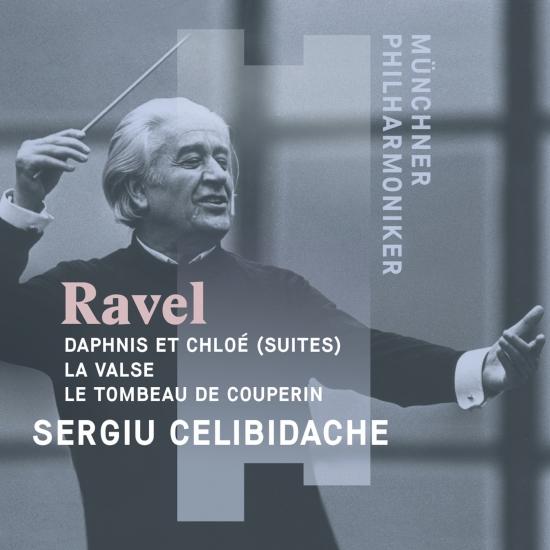 The Munich Philharmonic and Sergiu Celibidache share an exceptional legacy. He started his work as principal conductor in 1979 and remained in this position for as long as 17 years. Sergiu Celibidache played an integral part in making the Munich Philharmonic what it is today: an orchestra of worldwide renown. Today the Munich Philharmonic is critically acclaimed internationally with hopelessly sold out concerts in Munich and the world.
On their recently launched label MPHIL, the Munich Philharmonic is opening up its vast archives, giving listeners the opportunity to enjoy one of the richest collections of recordings by legendary artists. Because of the Celibidache era and its part in forming the core essence of the orchestra, this first MPHIL physical archive release consists of two recordings under the baton of Maestro Celibidache.
Maurice Ravel is an undisputed part of Sergiu Celibidache’s core repertoire as well as historically that of the Munich Philharmonic. The history of the orchestra is inextricably linked to the composer and his work. Ravel is known for his musical harmony and subtle tonal colours. He demonstrates his artful skills in instrumentation masterfully with »Daphnis et Chloé« making use of a large orchestra with an extended woodwind ensemble as well as rich percussion. His focus lies not within new sound or complex combination but clear contours interchanging with differentiating solos.
A »Forlane« by Couperin, an erotic dance, inspired Ravel to write »Le Tombeau de Couperin«. »Tombeau« signifies funeral music for deceased musicians in the context of the French Baroque. This piece is not meant to be a tribute to Francois Couperin alone, but to French Music of the 18th century. »La Valse« is the most famous piece by Ravel - it’s the manifestation of all his musical work. It is a comprehensive tonal range that plots a waltz, which drifts astray into darker domains.
Münchner Philharmoniker
Sergiu Celibidache, conductor