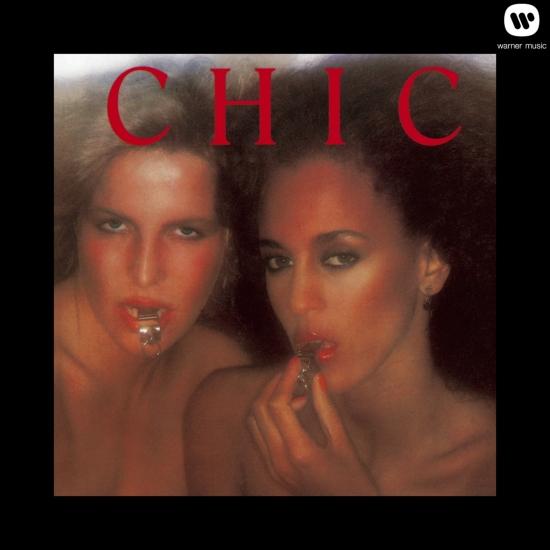 Although their follow-up album, C'EST CHIC, was the one that contained their anthemic disco hit 'La Freak,' this 1977 debut set the stage for the band's ultimate success as one of the iconic vocal groups of the disco era. CHIC album Songwriters Nile Rodgers and Bernard Edwards (guitarist and bassist, respectively) were masters at concocting simple, driving grooves with percussive, hooky bass lines, and an aura of decadent fun, underscored by the indiscriminate dropping of French expressions.
Lead singer Norma Jean Wright was particularly expressive in her upper range, creating a template for the hot-to-trot, feline sound associated with female disco vocalists. Backing singer Alfa Anderson holds her own here, too, and the women's voices blend well on such hits as 'Dance, Dance, Dance' and 'Strike Up the Band.'
There can be little argument that CHIC was disco's greatest band; and, working in a heavily producer-dominated field, they were most definitely a band. By the time CHIC appeared in the late '70s, disco was already slipping into the excess that eventually caused its downfall. CHIC bucked the trend by stripping disco's sound down to its basic elements; their funky, stylish grooves had an organic sense of interplay that was missing from many of their overproduced competitors. CHIC's sound was anchored by the scratchy, James Brown-style rhythm guitar of Nile Rodgers and the indelible, widely imitated (sometimes outright stolen) bass lines of Bernard Edwards; as producers, they used keyboard and string embellishments economically, which kept the emphasis on rhythm. CHIC's distinctive approach not only resulted in some of the finest dance singles of their time, but also helped create a template for urban funk, dance-pop, and even hip-hop in the post-disco era. Not coincidentally, Rodgers and Edwards wound up as two of the most successful producers of the '80s.
Norma Jean, vocals
Alfa Anderson, vocals
Nile Rodgers, guitar & vocals
Bernard Edwards, bass & vocals
Tony Thompson, drums
Additional personnel:
Luther Vandross, David Lasley, Norma Jean, Alfa Anderson, Robin Anderson, Diva Gray (vocals); Gloria Augustini (harp); George Young, Vito Rendace (flutes, tenor saxophones); Kenny Lehman (woodwinds); Jon Faddis (trumpet); Barry Rodgers (trombone); Robert Sabino, Andy Schwartz, Tom Coppola (keyboards); David Friedman (vibraphone, orchestral bells); Sammy Figueroa (percussion).
Recorded at Electric Lady Studios and The Power Station, New York.
Producers: Bernard Edwards, Nile Rodgers, Kenny Lehman, Bob Edwards.
Engineers: Robert Drake, Mike Frondelli, Ron Johnson, Tom Savarese, Bob Clearmountain.
Digitally remastered.

CHIC are one of the superpowers of late-’70s disco, a mixed-gender band from New York City that provided some of the biggest and most enduring hits of the Studio 54 era.
Best know for: A pair of epochal #1 pop smashes in “Le Freak” and “Good Times,” as well as club classics like “I Want Your Love,” “Everybody Dance” and “Dance, Dance, Dance (Yowsah, Yowsah, Yowsah).” “Good Times” in particular has provided one of the great through-threads of the last 30 years of pop music, with its legendary bass line appearing (in various incarnations) in pop songs ranging from Queen’s “Another One Bites the Dust” to Daft Punk’s “Around the World”—and, most notably, providing the hook for Sugarhill Gang’s “Rappers’ Delight,” the song that brought hip-hop to the masses.
In addition to the irrepressible “Good Times,” Chic have made their influence felt through the production and songwriting work that group masterminds Nile Rodgers and Bernard Edwards did for other artists of their era, including Sister Sledge (“We Are Family”) and Sheila B. and Devotion (“Spacer”), as well as established artists looking to get on the disco bandwagon like Diana Ross (“Upside Down”) and David Bowie (“Let’s Dance”) and some of the biggest artists from next generation of pop, like Madonna (“Like a Virgin”) and Duran Duran (“A View to a Kill”). Oh, and French dance artist Modjo sampled their “Soup For One” for their 2001 hit “Lady (Hear Me Tonight),” which is pretty cool.