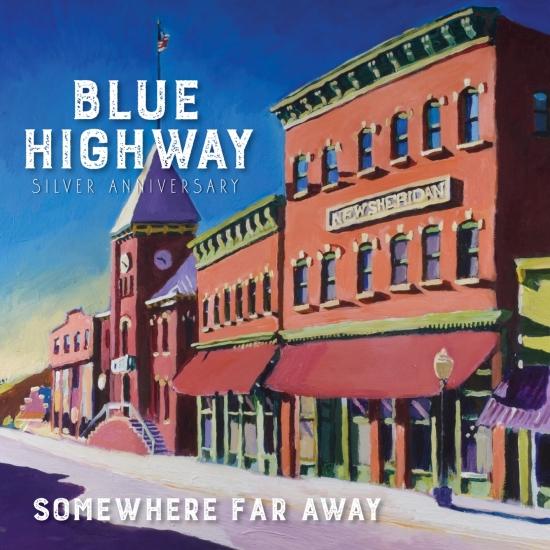 A band that makes it into bluegrass’ exclusive 25-year club inevitably celebrates the thousands of one-nighters, hundreds of festivals, dozens of recordings, and uncountable road miles by “taking an album off,” and releasing a retrospective. But that’s not Blue Highway and definitely not their new release
For 25 years, writing their own songs has set this highly-awarded band apart (members have racked up 28 IBMA Awards and three GRAMMY nominations as a band), so it’s no surprise that for Somewhere Far Away, their Silver Anniversary Rounder release, Blue Highway takes the road less traveled. The dozen new songs come from some of the finest songwriters in bluegrass, three of whom happen to be founding members – Tim Stafford, Wayne Taylor and Shawn Lane.
The opening track by two-time IBMA Songwriter of the Year (2014, 2017) Stafford and frequent collaborator Steve Gulley is about a dying convict dreaming of wide-open spaces, where he can see “Both Ends Of The Train.” The song is available now.
There’s also the wannabe wanderer of the title track “Somewhere Far Away,” the Old West outlaw on the run in “Cochise County,” and the pioneer family heading to “A Place I’ve Never Seen.” Those classic Western tales, a Blue Highway signature, are echoed by Roger Mason’s album art. Of course, in bluegrass, songs that aren’t about leaving home are usually about missing it, as in Tim and Bobby Starnes’ wistful, “In Texas Tonight” (sweetened by twin fiddles) and Shawn Lane’s poignant “Dear Kentucky.”
But two songs here are about being in exactly the right spot. Taylor’s “That Sounds More Like Heaven to Me” takes issue with the traditional Streets of Gold version of the afterlife. “Why would I need that?” he explains. “I don’t need a mansion; a cabin somewhere would be fine. And just sitting around, talking with people who are long gone before me, that sounds more like Heaven to me.” “I Already Do,” by Stafford/Gulley, is about another man with a satisfied mind, inspired by bluegrass legend Jimmy Martin’s response to a developer trying to buy his Tennessee farm, promising him enough cash to live anywhere he wanted. “I already do,” Martin replied.
Another Martin-influenced song is the Stafford/Taylor ode to equilibrium, “Ain’t No Better, Ain’t No Worse,” a fun, hard-driving bluegrass number with that catch-phrase chorus. Gospel songs have always been important to this Dove Award-winning band, and Shawn’s “Life Song” is one of their best. Burleson’s original “Orville’s Webb,” named for a memorable character in his hometown, is a slinky minor-key instrumental showcasing his Jason Burleson signature model Prucha banjo.
Longevity is a rare thing in bluegrass. As they face their career milestone, everyone in the band is aware that surviving 25 years with four of five original members (Ickes left in 2015 and Gary Hultman joined the band in early 2019) is pretty unique in any style of music. They all agree – keeping yourself entertained and engaged is the most important. It’s that creative process that drives Blue Highway. “We wanted to not only play this music, we wanted to add new music to the genre,” says Taylor. “You can only play ‘Little Girl of Mine in Tennessee’ so many times.”
“It’s the original material, that’s what keeps us going,” Stafford agrees. “If we didn’t have this creative thing happening, I just don’t think we’d still be doing it.” That’s why Somewhere Far Away isn’t just a Silver Anniversary celebration: it’s the culmination of a quarter century of Tim Stafford, Wayne Taylor, Shawn Lane and Jason Burleson sharing stages and studios, honing their collective crafts as uncompromising instrumentalists, singers, and songwriters. Somewhere Far Away is proof Blue Highway is still enjoying the ride.
Jason Burleson, vocals, banjo
Shawn Lane, vocals, mandolin, fiddle, guitar
Gaven Largent, vocals, dobro
Tim Stafford, vocals, guitar
Wayne Taylor, vocals, bass 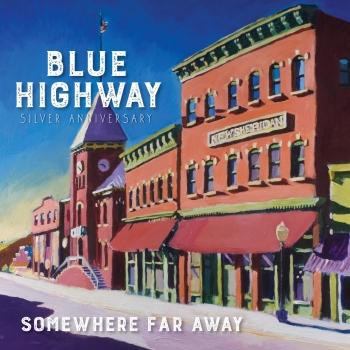 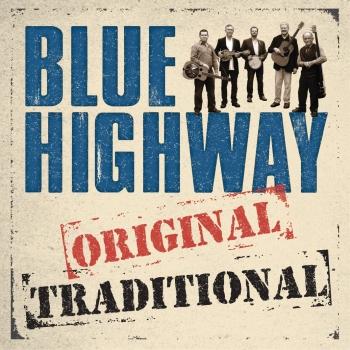 Blue Highway
Highly esteemed bluegrass band Blue Highway have earned 25 collective IBMA Awards, 6 SPBGMA Awards, one Dove Award, and two Grammy nominations. Tim Stafford recently received honors as 2015 SPBGMA Guitar Player of the Year and 2014 IBMA Songwriter of the Year. Rob Ickes reigns as the Most Awarded Instrumentalist in the history of IBMA with 15 Dobro Player of the Year honors, and was recently nominated for a Grammy Award for Best Folk Album for his collaborative album "Three Bells" with Jerry Douglas and the late great Mike Auldridge.
Blue Highway's "The Game" soared to #1 on the national Bluegrass Unlimited Album Chart and held the top spot for a jaw-dropping 7 consecutive months (Jun-Dec 2014). The IBMA 2012 Vocal Group of the Year also sent the title track of The Game to #1 on multiple charts, including Bluegrass Today and Roots Music Report, as well as standing tall at #1 for three consecutive months on the national Bluegrass Unlimited Song Chart (Aug-Oct 2014).
"The Game" was named the #1 Bluegrass Album of the Year by critic Daniel Mullins in his end of the year Top 20 Albums of 2014 list published in Bluegrass Today.
Blue Highway stormed national charts garnering the Most Radio Airplay of any Bluegrass Artist for 2014, per the 2014 Bluegrass Radio Airplay Chart released by Bluegrass Today. Blue Highway's chart-topping The Game sent three songs soaring into the Top 30 for the year with a total of 12,115 spins. (The Game - # 6 - 4531 spins ... Talk Is Cheap - # 11 - 3922 spins ... Remind Me of You - # 14 - 3662 spins) The queen of bluegrass Rhonda Vincent was just behind at #2 in radio airplay for 2014, with two songs in the Top 30 and 8,300 aggregate spins.
Blue Highway broke into 2015 with Sold Out shows accounting for half of their concerts to date. The band has received 14 cumulative award nominations in the past 6 months, with all five of the band's founding powerhouse members still intact, including: Jason Burleson (banjo, vocals), Rob Ickes (dobro, vocals), Shawn Lane (mandolin, fiddle, vocals), Tim Stafford (guitar, vocals), and Wayne Taylor (bass, vocals).