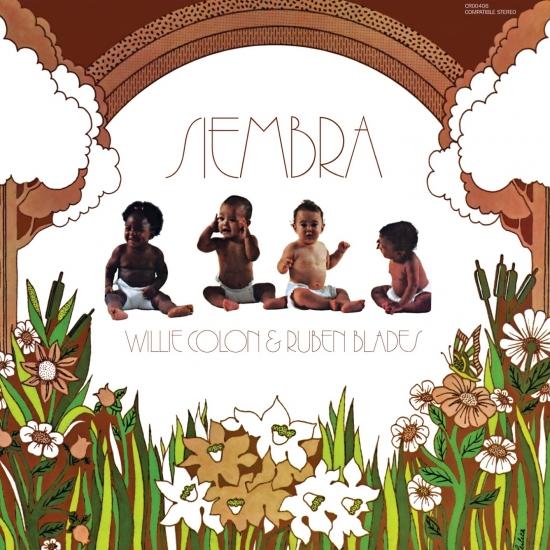 When Siembra released in 1978, it was the second of four collaborations on Fania Records between salsa giants Willie Colón and Rubén Blades. The influential release set the salsa world on fire! It was one of few albums where almost every song became a hit at one time or another throughout the U.S. and Latin America.
The unconventional set delivered mostly songs with strong social messages and storytelling, while not common themes for salsa music, the messages resonated with Latinos around the world, making it a landmark release known as one of the most popular salsa albums in the history of Latin music. Siembra includes the Blades masterpiece “Pedro Navaja,” inspired by Bertolt Brecht’s "Threepenny Opera", about a gangster shot to death in the barrio. The smash hit includes dramatic sounds of street noise, sirens and even a part of the chorus lyrics for the song “America” from the West Side Story film, where the background “coro” singers belt out “I like to live in America.” Other hits include “Buscando Guayaba” and “Plástico.”
In 2007, Siembra was inducted into the Latin GRAMMY® Hall of Fame, further establishing the title’s historical significance. Siembra has been remastered from the original analog master tapes for the first time.
"The high point of Willie Colón's ongoing collaboration with Rubén Blades (and close to a career peak for both artists), Siembra exploded on the salsa scene in 1978 and has never been forgotten by fans. Beginning with a minute of playfully deceptive quasi-disco arrangements, Colón and his band slip into a devastating salsa groove for the opener, "Plástico," on which Blades first criticizes America's throwaway society and then brings all of Latin America together with a call to unity. Blades wrote all but one of the songs on Siembra, and shines on all of them; his extended high-tenor salsa scatting lifts "Buscando Guayaba," his tender side comes across on the love song "Dime," and he outlines a devastating life-in-el-Barrio exposé with "Pedro Navaja" (Peter the Knife). For the latter, Colón and Luis Ortiz's tight arrangement adds immeasurably to the song, using street noise and sirens, breaking into an ironic "I like to live in America!," and punching the statement home with a four-trombone line. Reflecting the tough times but optimistic attitude of el Barrio during the late '70s, Siembra joined Cosa Nuestra as one of Willie Colón's career landmarks." (John Bush, AMG)
Willie Colón, trombone, musical director
Rubén Blades, lead vocals
José Torres, piano, Fender Rhodes, electric piano
José Mangual Jr., bongos, maracas
Jimmy Delgado, timbales
Adalberto Santiago, percussion
Eddie Montalvo, tumbadora, percussion
Bryan Brake, drums
Salvador Cuevas, bass
Eddie Rivera, bass
Chorus Ensemble
Digitally remastered