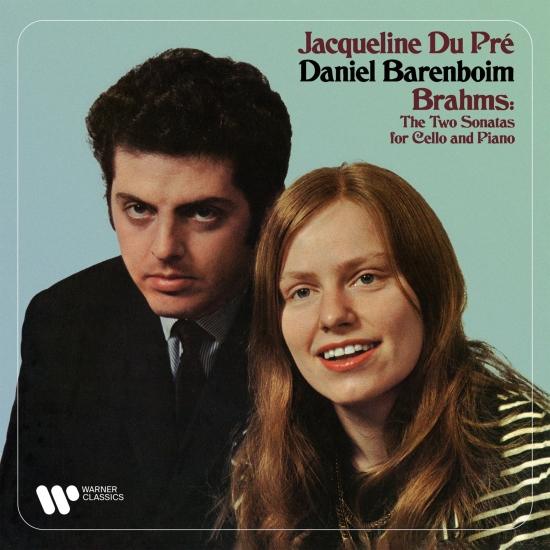 Renowned as a great interpreter of Brahms, Jacqueline du Pré, here at the peak of her art and technical abilities, delivers the latest version recorded with her husband Daniel Barenboim in May-August 1968. A pillar of the cello repertoire, the Two Sonatas benefit from a new remastering in 192kHz/24-bit from original tapes by Art & Son Studio, Annecy.
"Jacqueline du Pré and Daniel Barenboim were married in 1967. One of the first things they did as a couple was make this recording of the Brahms sonatas (when it was finished, in 1968, Du Pré was only 23, Barenboim an old man of 25). Their collaboration is an intense one, both in the dark, melancholy E minor work and in the passionate F major sonata, which receives a fulminant performance here, even if its scherzo sounds rather elephantine. Du Pré is quite rough much of the time, but her tone is huge and she wrings incredible expression out of every gesture; Barenboim is musically and sonically in the background, which under the circumstances is fine. Excellently remastered, though at a high level, the analog recording has striking immediacy and depth." (Ted Libbey)
We call it a “Cello Sonata,” but the official name Johannes Brahms gave this piece, completed in 1865, is “Sonate für Klavier und Violoncello.” To stress further the equality between the two instruments, Brahms specified that the piano “should be a partner—often a leading, often a watchful and considerate partner—but it should under no circumstances assume a purely accompanying role.”
The E minor Sonata is dedicated to Josef Gänsbacher, an Austrian music professor and amateur cellist. When, during a private performance for friends, Gänsbacher complained that he couldn’t hear his cello because Brahms was playing so loudly on the piano, the composer growled, “Lucky for you, too.”
The spirit of J.S. Bach hovers around this Sonata. The subject of the three-voice fugue which opens the final movement quotes Contrapunctus 13 from Bach’s The Art of Fugue BWV 1080. The expansive opening theme of the first movement contains echos of the Fourth Contrapunctus from the same set. The second movement (Allegretto quasi Menuetto and Trio) is filled with the graceful elegance of baroque dance. In the trio section, the piano ghosts the cello’s melodic line, creating a glassy, ethereal new voice.
While paying homage to the past, this music ultimately transcends its influences and delivers a bold, powerful and unique new drama. We hear all of the fire, passion, lament, and nostalgia of Brahms. Listen to the conversation between voices, and the way the music develops in “searching” and gradually evolving motivic cells. In the final movement, listen to the way Brahms moves beyond Bach’s initial fugue subject into soaring new territory. (Timothy Judd)
Jacqueline du Pré, cello
Daniel Barenboim, piano
Recorded May 20 and August 18, 1968 in No. 1 Studio, Abbey Road, London
Digitally remastered