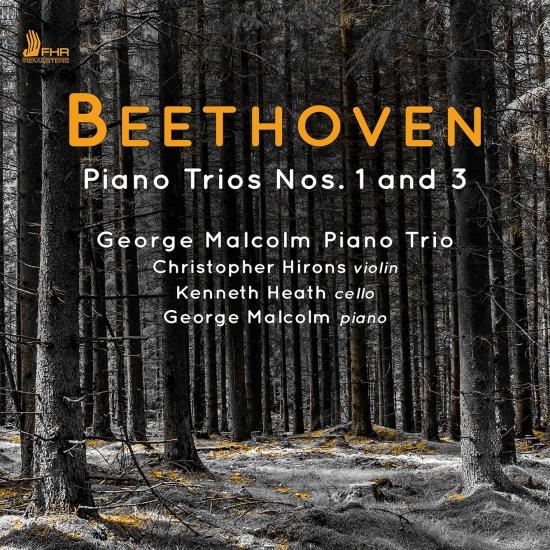 Beethoven’s Op. 1 Piano Trios are startling in their freshness and forcefulness, but there is a lot more to them than that. For one thing, they teem with witty touches, something that is brought out by performances like these, featuring the George Malcolm Piano Trio.
Originally released in 1977, the recording is published here on CD for the first time, and fittingly in Beethoven 2020 year. These are fresh, bold and musically great performances. The George Malcolm Piano Trio only lasted three years before the trio’s cellist Kenneth Heath died; this is their only recording and is a true testament of a wondeful ensemble partnership, full of verve and humour.
"These accomplished recordings have reappeared in splendid re-mastering and its been a pleasure to hear them. It’s certainly a side of George Malcolm of which I’d been unaware. His admirers, and those of Christopher Hirons and Kenneth Heath, will be pleased to have the opportunity to acquire these performances. There are excellent notes by an expert in this field Tully Potter with a couple of photos. I see that when the album was released in 1977, it cost £2.80, equivalent to £17.25 so its full price is, I suppose, acceptable, despite considerable competition. This is, after all, a one-off. It’s very good to see this byway in the careers of three distinguished musicians being unearthed." (David R Dunsmore, MusicWeb International)
“One of the real joys of the recorded music industry is that tracks which were laid down half a century ago can pop up just as fresh and bright as the day they were recorded. This is certainly true of these two piano trios recorded in 1976 and as delightful today as they were back in the 1970s. Many thanks to First Hand Records for making them available again.” (Lark Reviews)
George Malcolm Piano Trio:
Christopher Hirons, violin
Kenneth Heath, cello
George Malcolm, piano
Digitally remastered 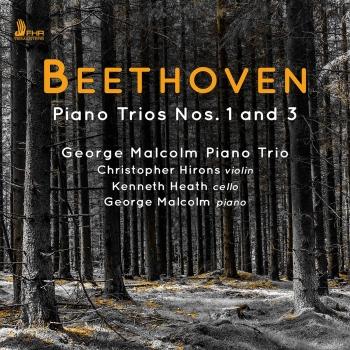 George Malcolm
will be identified in many people’s minds as a Harpsichordist, Choir Master or Conductor. In fact he first studied the piano. He was taught for 18 months by a gifted Nun in the kindergarten class at the Notre Dame Convent in Clapham, and, deciding he had a special talent, she took him along to play to Sir Hugh Allen at the Royal College of Music. He was accepted, and at the age of seven studied piano with Kathleen McWhitty. There was no Junior department at the College in those days, and for several years he was the only child there. While attending a London day school, he continued at the College and then, having completed his time at Oxford University, he returned to take up his studies with Herbert Fryer. He was on the threshold of his career as a professional pianist when the onset of war drastically changed the direction of his life. He was appointed an RAF Bandleader, which involved organising and conducting concerts all over the country. After the war he had hoped to resume his intended career as a pianist, but fate was to take him in a different direction.
“I left the R.A.F. in 1946 when I was demobilised, and I wanted to spend my gratuity on something: I decided that a harpsichord would be an amusing sort of toy to have. I did not know anything about the harpsichord in those days. My training had been that of a purely conventional concert pianist, and as a student I had never even moved among the kind of people who were interested in Baroque music or old instruments. I scarcely knew the difference between a clavichord and a harpsichord; but I thought it would be fun to possess an old keyboard instrument. I had the great good fortune to find a very good instrument, a Shudi-Broadwood of 1775, at an auction. There was not very much competition for them in those days and I got it very cheap. I had it done up and put it in my studio — literally as a toy — something to amuse myself with between bouts of piano practice, with no intention of ever using it professionally. In 1946 it was not anything like so usual to be in possession of a Harpsichord as it is now, and when people found that I had got this very good one, I started to get asked to take it to concerts and play it, and then the whole thing very quickly escalated and before I knew where I was, I was getting quite a lot of harpsichord engagements and very few piano ones, and it just went on from there.” [George Malcolm in an interview in 1973]
The Harpsichord was rare then, and very soon George and his Harpsichord were in great demand for concerts. His favourite instrument was to be built by Thomas Goff, and was known for its marvellous dynamic qualities, which George used to exciting and dramatic effect, with his brilliant harmonies and ornamentations. He later had a Robert Goble Harpsichord in his London home-studio as he found it was a versatile modern harpsichord with many modern pedal facilities and was reliable and easy to maintain.
While his concert career was being established, he was appointed director of Music at Westminster Cathedral in 1947. He had a deep affinity with Catholic Church Music and enjoyed a successful period of time as Choirmaster of this Catholic London Cathedral (not to be confused with the nearby Church of England Westminster Abbey). He disliked the “hooting” sound so prevalent in choirboys at that time, and was to achieve great success in producing the bright “Continental” sound that so impressed Benjamin Britten when he wrote his “Missa Brevis” especially for the Westminster Cathedral Choir. Although he was himself a good organiser, and a tireless worker, Malcolm always spoke his mind to the point of being prickly. He was a brilliant Organist. As a Choirmaster he was strict, even testy at times, but there was a mutual affection with the Westminster Cathedral Choir.
He left the Cathedral in 1959 after 12 years as Director of the Choir to enable him to accept the ever increasing demands on him for concert performances on the Harpsichord. He became Artistic Director and Conductor of the London Philomusica from 1962 to 1966 following Granville Jones who had taken charge of the orchestra when Thurston Dart left. Then he became Associate Conductor of the B.B.C. Scottish Symphony Orchestra as well as continuing to give numerous Recitals of the large 18th century Harpsichord repertoire in Britain and Germany, as well as all over the rest of Western and Eastern Europe, including Russia....