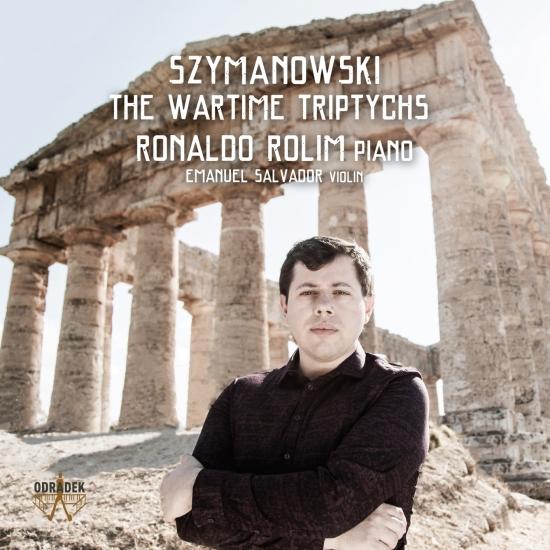 Brazilian pianist Ronaldo Rolim is joined by violinist Emanuel Salvador for Mythes, one of the most strikingly original statements of early 20th-century music, described by Szymanowski himself as “epoch-making”. In Métopes and Masques for solo piano Szymanowski’s harmonic language is even more daring, exuding a hedonistic joie de vivre; all three works chart the journey from darkness to light, from death to life.
Of the many masterpieces Szymanowski wrote during World War I, the works which best embody the achievements of this period are a series of three triptychs, all with mythology as a backdrop: Métopes for piano, Op. 29, Mythes for violin and piano, Op. 30, and Masques for piano, Op. 34.
A landmark of the violin repertoire, Mythes is also one of the most strikingly original statements of early 20th-century music. Szymanowski was widely praised for its writing; in his own words it was “epoch-making”. Métopes represents a level of experimentation in harmony and form a few steps further on from Mythes.
Despite their fiendish difficulty, Mythes and Métopes were not conceived as public statements – their messages are imbued with intimacy and confidentiality. The same cannot be said of Masques, which decisively admits the extravagance of the musical language nurtured in the previous triptychs and expands it in every way. All three works share a move from darkness to light, from death to life, infiltrated by a hedonistic joie de vivre.
Ronaldo Rolim grew up in Brazil before moving to the United States in 2005. He has been mentored by Flavio Varani, Benjamin Pasternack and Boris Berman, and currently resides in Philadelphia. Rolim tours extensively on the international stage as a solo recitalist, with orchestras, and as a chamber musician.
Ronaldo Rolim, piano 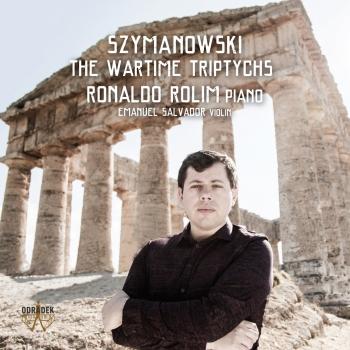 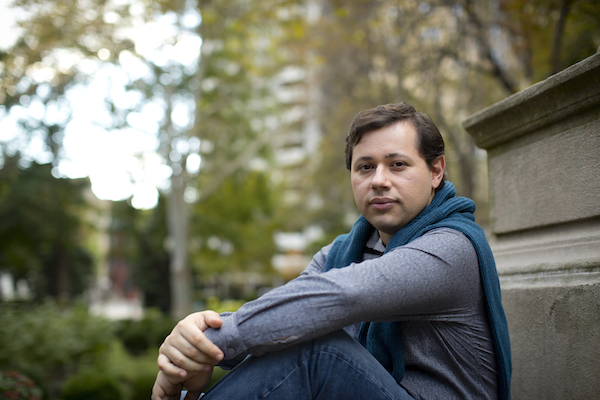 Ronaldo Rolim
With “a special ability to present touching interpretations” (El Norte), Brazilian pianist Ronaldo Rolim is a prominent figure among the newest generation of outstanding musicians. Acclaimed for his “consummate elegance” (New York Concert Review) and “mastery of phrasing, agogic accents, and dynamics” (Oberbaselbieter Zeitung), he has performed extensively over four continents, in such venues such as Carnegie Hall, Zurich’s Tonhalle, London’s Wigmore Hall, the Great Hall of the Liszt Academy in Budapest, and Beijing’s National Centre for the Performing Arts. He is a winner of Astral’s 2017 National Auditions. He has also captured top prizes at numerous international competitions, including the James Mottram, Bösendorfer, San Marino, Lyon, and Teresa Carreño competition, as well as the prestigious Concours Géza Anda in Zurich. In 2019, Mr. Rolim releases his latest album on Odradek Records, Szymanowski - The Wartime Triptychs, devoted to the programmatic works the Polish composer wrote during World War I. In fact, this very topic is extensively discussed in Mr. Rolim's doctoral thesis, completed in 2016 at Yale University. ​
Mr. Rolim begins the 2019-2020 season as soloist in Beethoven’s Concerto No. 5 with the Louisiana Philharmonic. He was featured in a celebration of the 150th anniversary of the birth of Enrique Granados, with performances of the composer’s complete Goyescas in venues in the U.S., Europe, and Brazil. Recent guest soloist performances include Brahms’ Concerto No. 1 with the Symphony Orchestra of the St. Petersburg State Academic Capella, Debussy’s Fantaisie with the Minas Gerais Philharmonic in Brazil, and a German tour of Beethoven’s Concerto No. 5 with Ukraine’s Lviv Philharmonic Orchestra. Other recent performances include both the Grieg and Schumann concerti at the Septembre Musical Festival in Montreux, Switzerland, the Chausson Concerto with the São Paulo String Quartet, and an appearance in Bernstein’s Age of Anxiety in the Bernstein Centenary Festival hosted by the Minas Gerais Philharmonic. ​
Mr. Rolim has performed with the Tonhalle Orchester Zürich, Musikkollegium Winterthur, Concerto Budapest, Phoenix Symphony, and the Royal Liverpool Philharmonic Orchestra, as well as many of Brazil’s foremost ensembles. A frequent presence at international music festivals, he has been featured in solo recitals and chamber music performances at Ravinia, Folle Journée, Accademia Musicale Chigiana, Musikdorf Ernen, Académie Musicale de Villecroze, the Kingston Chamber Music Festival, and the Lake George Music Festival. His performances have been featured in radio broadcasts in Brazil (Radios MEC and Cultura), the U.S. (Spokane Public Radio and WBJC Baltimore), and Europe (Radios SWR 2, BBC 3, Rai 3, and France Musique). He has also been featured in several television programs in his home country, including Brasil Piano Solo, a series of recitals dedicated exclusively to Brazilian music, presented by the TV Cultura Channel. He has also participated in the documentary Magda Tagliaferro: A World Inside The Piano, in which he performed music of Scriabin.
​A passionate advocate of chamber music, Mr. Rolim is the founding member of Trio Appassionata, formed in 2007 with violinist Lydia Chernicoff and cellist Andrea Casarrubios. Some of the ensemble’s recent projects include tours of Brazil and China, and the release of its debut album, gone into night are all the eyes, for Odradek Records. Featuring piano trios by American composers, Gramophone said the disc “deserves automatic respect”, presenting “music-making as impressive and dangerous as a granite cliff” (International Record Review). Mr. Rolim greatly enjoys working with diverse chamber musicians, and has performed with the Aizuri, Jasper, and São Paulo string quartets, and members of Ensemble Connect, the Baltimore Symphony, the Brazilian Symphony, and Bronx Arts Ensemble. ​
Ronaldo Rolim began musical studies with his mother, Miriam Corrêa, and gave his first public performance at the age of four. He was admitted to the Magda Tagliaferro School in São Paulo as a student of Zilda Candida dos Santos and Armando Fava Filho. After winning the Nelson Freire and the Magda Tagliaferro national piano competitions at the age of 18, he moved to the U.S., where he studied with Flavio Varani at Oakland University (Michigan), Benjamin Pasternack at the Peabody Conservatory, and Boris Berman at the Yale School of Music.