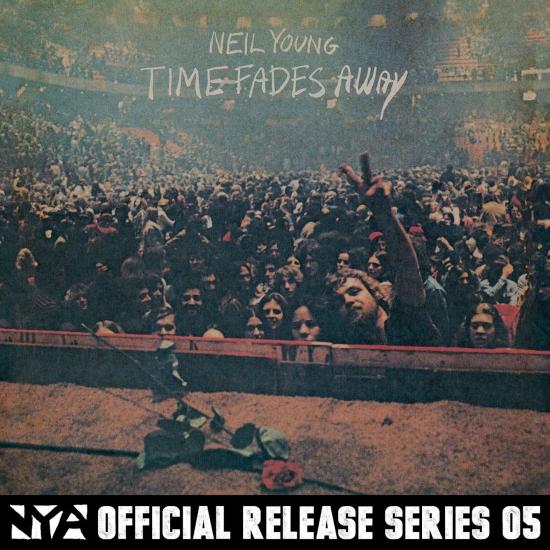 „Time Fades Away“ is a 1973 live album by Neil Young, consisting of previously unreleased material. Neil Young's first live album, it was recorded with The Stray Gators on the tour following 1972's highly successful 'Harvest.'
The recording received much critical praise and is highly sought after by fans. The album reached #22 on the Billboard Charts, and quickly achieved gold status, selling over 1 million copies in both the US and UK.
„Anyone who has followed Neil Young's career knows enough not to expect a simple evening of mellow good times when they see him in concert, but in 1973, when Young hit the road after Harvest had confirmed his status as a first-echelon rock star, that knowledge wasn't nearly as common as it is today. Young's natural inclinations to travel against the current of audience expectations were amplified by a stormy relationship between himself and his touring band, as well as the devastating death of guitarist Danny Whitten, who died of a drug overdose shortly after being given his pink slip during the first phase of tour rehearsals. The shows that followed turned into a nightly exorcism of Young's rage and guilt, as well as a battle between himself and an audience who, expecting to hear 'Old Man' and 'Heart of Gold,' didn't know what to make of the electric assault they witnessed. All the more remarkably, Young brought along a mobile recording truck to capture the tour on tape for a live album and the result, Time Fades Away, was a ragged musical parade of bad karma and road craziness, opening with Young bellowing '14 junkies, too weak to work' on the title cut, and closing with 'Last Dance,' in which he tells his fans 'you can live your own life' with all the optimism of a man on the deck of a sinking ship. While critics and fans were not kind to Time Fades Away upon first release, decades later it sounds very much of a piece with Tonight's the Night and On the Beach, albums that explored the troubled zeitgeist of America in the mid-'70s in a way few rockers had the courage to face. If the performances are often loose and ragged, they're also brimming with emotional force, and despite the dashed hopes of 'Yonder Stands the Sinner' and 'Last Dance,' 'Don't Be Denied' is a moving remembrance of Young's childhood and what music has meant to him, and it's one of the most powerful performances Young ever committed to vinyl. Few rockers have been as willing as Young to lay themselves bare before their audience, and Time Fades Away ranks with the bravest and most painfully honest albums of his career -- like the tequila Young was drinking on that tour, it isn't for everyone, but you may be surprised by its powerful effects.“ (Mark Deming, AMG)
Neil Young, vocals, guitar, harmonica
Ben Keith, vocals, guitar, steel guitar
David Crosby, vocals, guitar
Graham Nash, vocals
Jack Nitzsche, guitar, keyboards
John Barbata, drums
Tim Drummond, drums
Recorded February 11 – April 1, 1973 (except 'Love In Mind': January 30, 1971)
Produced by Neil Young, Elliot Mazer
Digitally remastered

This Note's for You (Remastered)

Long May You Run (Remastered)

Live At The Cellar Door (Remastered)

Fork In the Road (Remastered)

Dead Man (Music from and Inspired by the Motion Picture) (Remastered)

After the Gold Rush (Remastered)

Everybody Knows This Is Nowhere (Remastered)

On The Beach (Remastered)