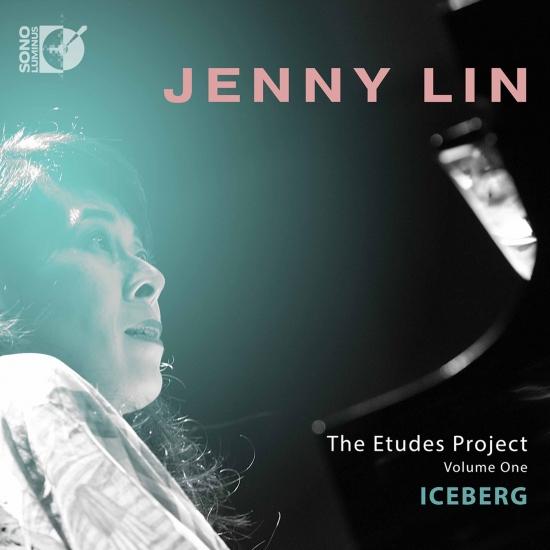 The term étude first started to turn up in musical literature in the late 1700s, and came into common usage in the first half of the 19th century—either because of, or in close proximity to, the Paris Conservatoire, where the form was polished and promulgated. The notion of a piece of music exactingly engineered to promote some specific aspect of technique was nothing new; in her public presentations of “The Etudes Project,” pianist Jenny Lin traces the concept back to Johann Sebastian Bach’s Clavier-Übung, four volumes of keyboard exercises published between 1726 and 1741— the final volume known more widely as the “Goldberg” Variations. A certain degree of rigor is embedded into the concept: the word étude translates as “study,” and most early examples of the genre favor praxis over poetry. But with the advent of Chopin and Liszt, with their astonishing technical skills and abundant imaginations, the étude would transcend its workmanlike origin. The genre characteristically would remain a test of manual dexterity. But increasingly, the challenge intrinsic to the étude was not only to strengthen a particular technique or skill, but also to transform a practical exercise into a pleasing utterance: the concert étude, as the form would become known.
Countless composers have risen to the challenge of the étude. This album, the first documentation of a sweeping project conceived by Lin, includes some of the most famous examples—Debussy, Scriabin, Rachmaninoff, Messiaen, Ligeti, and Glass—alongside equally noteworthy contributions to the format by such mavericks as Ruth Crawford Seeger, Toshio Hosokawa, and Unsuk Chin. Lin further pairs each of her canonical selections with an entirely new work by a member of ICEBERG New Music, a determinedly heterodox collaborative of 10 gifted young composers who represent a broad range of stylistic inclinations, but who are united by their enduring faith in substance and craft.
Bucking a current fad, the new études were not proposed as sequels or responses to existing works. Lin simply asked the ICEBERG composers to challenge her, and then used her own 4 5 keen ear and sure instincts to find sympathetic pairings. Driving rhythms and rich harmonies link pieces by Alex Burtzos and Chopin. Rangy scatterings of notes present a frolicsome affinity between Victor Baez and Unsuk Chin. Stephanie Ann Boyd and Debussy both deploy dreamy arpeggios in rippling waves; and so on. In each case, hearing the new piece enhances your understanding of the older one—and vice versa.
Identifying affinities among old and new music, and among familiar and unknown pieces, is a knack Lin has demonstrated again and again throughout her career—and it’s part of what makes her not only a persuasive interpreter, but also an invaluable guide and companion. Stated simply: you are in extraordinarily sure hands, here. (Steve Smith)
Jenny Lin, piano 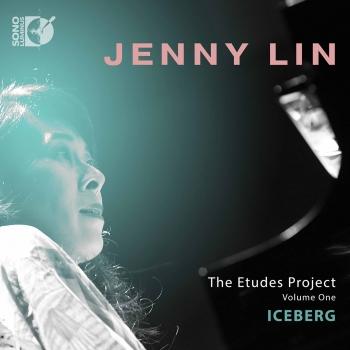 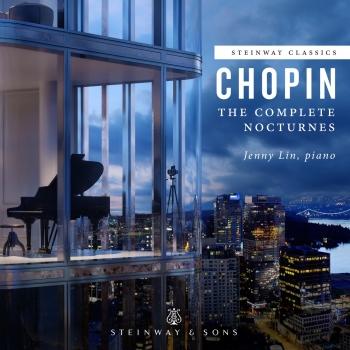 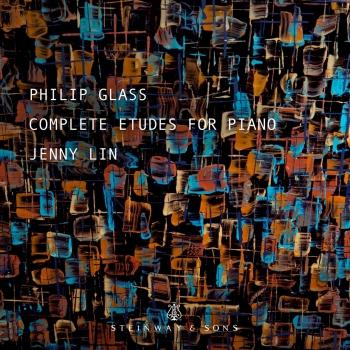 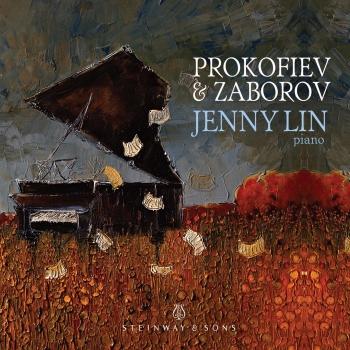 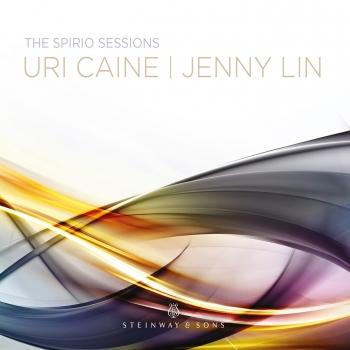 Jenny Lin
is one of the most respected young pianists today, admired for her adventurous programming and charismatic stage presence. Her ability to combine classical and contemporary literature has brought her to the attention of international critics and audiences. She has been acclaimed for her “remarkable technical command” and “a gift for melodic flow” by The New York Times. The Washington Post praises “Lin’s confident fingers… spectacular technique… “, “…surely one of the most interesting pianists in America right now…” and Gramophone Magazine has hailed her as “an exceptionally sensitive pianist”. Martha Argerich wrote: “Miss Jenny Lin is a very gifted young musician and a brilliant pianist.”
Jenny’s orchestral engagements have included Beethoven’s Choral Fantasy with Collegiate Chorale and American Symphony, Valentin Silvestrov’s Metamusik with Winnipeg Symphony Orchestra, Manuel de Falla’s Nights in the Garden of Spain with La Orquesta Sinfónica de Gijón; Ernest Bloch’s Concerto Grosso No. 1 with SWR Rundfunkorchester; world premiere of Stefano Gervasoni’s Piano Concerto with Orchestra Sinfonica Nationale della RAI, and Tchaikovsky’s Piano Concerto No. 1 with National Symphony Orchestra of Taiwan. She has also worked with NDR Radiophilharmonie, Flemish Radio Orchestra, Nürnberger Symphoniker, Spoleto Festival Orchestra, Chamber Orchestra of Philadelphia, and performed with conductors such as Lothar Zagrosek, James Bagwell, Jiri Starek, Urs Schneider, Alexander Mickelthwate, Peter Bay, Jac van Steen, Ovidiu Balan, Wen-Pin Chien, Kek-Tjiang Lim, John Kennedy, Carlos Amat, Oliver Diaz, and Celso Antunes.
Her concerts have taken her to Carnegie Hall, Avery Fisher Hall, Kennedy Center, Miller Theatre, MoMA, Whitney Museum, San Francisco Performances, Freer Gallery of Art, Morgan Library, (Le) Poisson Rouge, National Gallery of Art, Corcoran Gallery, Spivey Hall, and throughout Europe and the Far East; as well as Festivals worldwide at Lincoln Center Mostly Mozart, BAM’s Next Wave, Spoleto and Portland International Piano Festivals in the USA, Chopin Festival in Austria, Flanders and Ars Musica Festivals in Belgium, Shanghai New Music Festival in China, Divonne Festival in France, Schleswig-Holstein, Potsdam and Husum Piano Rarities Festivals in Germany, Kings Place in London, Millennium Festival in Spain, Festival Archipel in Switzerland, and Winnipeg New Music in Canada.
Jenny’s extensive discography includes critically acclaimed recordings on Steinway & Sons, hänssler CLASSIC, eOne Records, BIS Records, Albany Records, and Sunrise Records. Since 2000, she has over twenty albums to her credit. The New York Times called her disc of Federico Mompou’s Musica Callada “…beautifully recorded…”. Classicstoday praised her 24 Preludes and Fugues Op. 87 by Dmitri Shostakovitch “…hands down the finest version of this massive work” and was voted Best of 2009 by the Washington Post, All-Music Guide raved: “The 11th Finger is a thrill ride for musical adventurers” and “Lin’s playing is nothing less than superhuman”, and Gramophone reported on her CD of Stravinsky’s solo piano music “superbly recorded… another notable achievement from this gifted and imaginative artist.” Other notable recordings have included Liszt Sonata and Schumann Fantasie, music for Piano and Orchestra by Ernest Bloch, Xavier Montsalvatge, Ma Shui-Long Piano Concerto, and ‘Get Happy’, an album of Broadway song arrangements by pianists such as Stephen Hough, Marc-Andre Hamelin, Chistopher O’Riley, and Stephen Prutsman. Two new releases are scheduled for 2015, an album for children and a two-piano disc with Uri Caine.
Jenny is the central figure in Cooking for Jenny by Elemental Films, a musical documentary portraying her journey to the north of Spain and meeting with composer Javier López de Guereña for the preparation of the world premier of his piano concerto ZAHARA. Other media appearances include CBS Sunday Morning, NPR Performance Today, and “Speaking for Myself”, a film about Manhattan as seen through the eyes of eight contemporary artists by filmmaker Bert Shapiro.
Born in Taiwan and raised in Austria, Jenny studied with Noel Flores at the Hochschule für Musik in Vienna, with Julian Martin at the Peabody Conservatory in Baltimore, and with Dominique Weber in Geneva. She has also worked with Leon Fleisher, Richard Goode, and Blanca Uribe, and with Dimitri Bashkirov and Andreas Staier at the Fondazione Internazionale per il pianoforte in Como, Italy. She holds a bachelor’s degree in German Literature from The Johns Hopkins University and currently resides in New York City.