From The Age of Swing Dick Hyman (feat. Mike Lipskin) 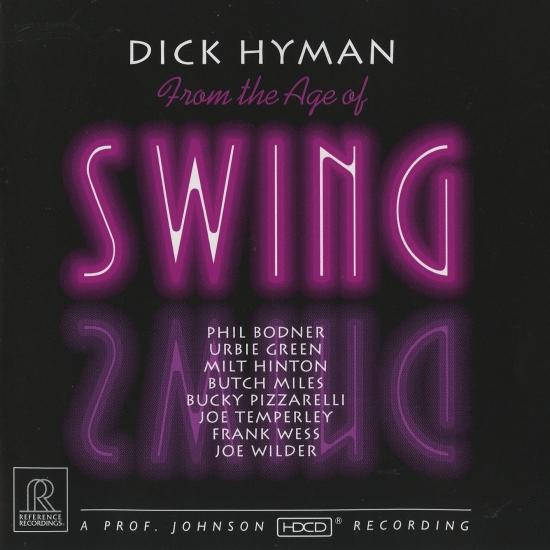 Info zu From The Age of Swing

Dick Hyman
Throughout a busy musical career that got underway in the early '50s, Dick Hyman has functioned as pianist, organist, arranger, music director, and composer. His versatility in all of these areas has resulted in film scores, orchestral compositions, concert appearances and well over 100 albums recorded under his own name. While developing a masterful facility for improvisation in his own piano style, Mr. Hyman has also investigated ragtime and the earliest periods of jazz and has researched and recorded the piano music of Scott Joplin, Jelly Roll Morton, James P. Johnson, Zez Confrey, Eubie Blake and Fats Waller, which he often features in his frequent recitals. Other solo recordings include the music of Irving Berlin, Harold Arlen, Cole Porter, George Gershwin, and Duke Ellington. Some of his recordings with combos are From The Age Of Swing, Swing Is Here, Cheek To Cheek, and If Bix Played Gershwin, plus numerous duet albums with Ruby Braff, Ralph Sutton and others. In a different vein, Mr. Hyman was one of the first to record on the Moog sythesizer, and his early explorations have now been reissued.
Mr. Hyman's concert compositions for orchestra include his Piano Concerto, Ragtime Fantasy, The Longest Blues in the World, and From Chama to Cumbres by Steam, a work for orchestra, jazz combo, and prerecorded railroad sounds. A cantata based on the autobiography of Mark Twain was premiered with the choral group, Gloria Musicae, in Sarasota. He composed his Sonata for violin and piano for Yuval Waldman and arranged for him "The Minotaur", an earlier piece originally recorded on Moog synthesizer. Among his recent chamber music compositions are Quintet for Piano and Strings, performed recently by Mr. Hyman and Concertante; and Sextet for Piano and Strings, and Danzas Tropicales, which he premiered in Sarasota with members of La Musica. Mr. Hyman has often been heard in duo-piano performances with Derek Smith, in Three-Piano Crossover with Marian McPartland and the late Ruth Laredo, and in various pops concerts under the direction of Doc Severinsen. In 2004, after serving as artistic director for the acclaimed Jazz in July series at New York's 92nd Street Y for twenty years, he stepped down but continues his Jazz Piano at the Y series as well as his post as jazz advisor to the Oregon Festival of American Music.
In addition to his activities in the jazz and concert worlds, Mr. Hyman had a prolific career in New York as a studio musician and won seven Most Valuable Player Awards from the National Academy of Recording Arts and Sciences. He acted as music director for such television programs as Benny Goodman's final appearance (on PBS) and for In Performance at the White House. He received an Emmy for his original score for Sunshine's on the Way, a daytime drama, and another for musical direction of a PBS Special on Eubie Blake. He is a member of the Jazz Hall of Fame of the Rutgers Institute of Jazz Studies and the New Jersey Jazz Society.
In years past, Dick Hyman was music director for Arthur Godfrey and orchestrator of the hit musical Sugar Babies. He has served as composer/arranger/conductor/pianist for the Woody Allen films Zelig, The Purple Rose of Cairo, Broadway Danny Rose, Stardust Memories, Hannah and Her Sisters, Radio Days, Bullets Over Broadway, Mighty Aphrodite, Everyone Says "I Love You", Sweet and Lowdown, The Curse Of The Jade Scorpion and Melinda and Melinda. Other scores have included Moonstruck, Scott Joplin—King of Ragtime, The Lemon Sisters, and Alan and Naomi. His music has also been heard in The Mask, Billy Bathgate, Two Weeks Notice, and other films. He has been music director of the production The Movie Music of Woody Allen, which premiered at the Hollywood Bowl.
In the dance field, Mr. Hyman composed and performed the score for the Cleveland/San Jose Ballet Company's Piano Man, and Twyla Tharp's The Bum's Rush for the American Ballet Theater. He was also the pianist/conductor/arranger in Ms.Tharp's Eight Jelly Rolls, Baker's Dozen, and The Bix Pieces and similarly arranged and performed for Miles Davis: Porgy and Bess, a choreographed production of The Dance Theater of Dallas.
Dick Hyman's 100 Years Of Jazz Piano, an encyclopedic CD-ROM, is based on his frequent recital-lecture. New recordings include "An Evening At The Cookery","America", duo-piano albums with Ray Kennedy and Bernd Lhotzky, and a trumpet/piano duet album with Randy Sandke entitled "Now And Again".
In 2009, Dick Hyman's Century of Jazz Piano was released, a 6-disc album package that covers a survey of jazz piano as recorded by Dick Hyman in 121 audio performances, plus a DVD with 13 hands-on lessons and 4 video performances.