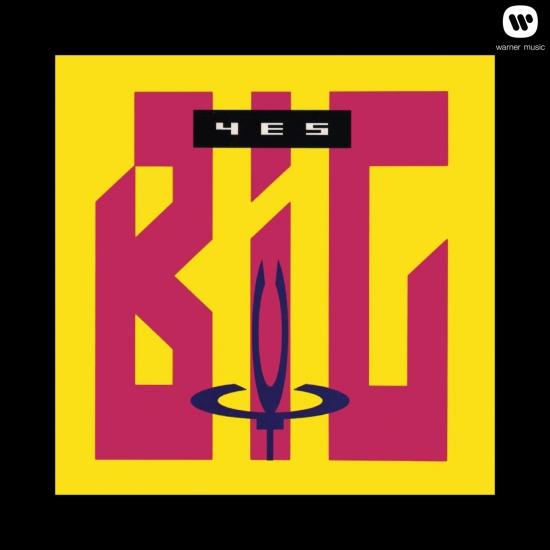 Yes continued in the synthesizer-laden, production-heavy mode that had made the band's comeback album, 90125, such a success. While some diehard fans found this era of Yes to be in contrast to the band's previous classically influenced art rock, this incarnation of the band had plenty of the strong musicianship and fantastical imagination that had propelled the group to legendary status in the '70s. Indeed, producer Trevor Horn and the band succeeded in creating an intriguing sonic landscape that only Yes could conceive. At first listen, songs like the opening 'Rhythm of Love,' with its ethereal choir introduction and rocking riffs, may seem superficial, but the soaring vocals of Jon Anderson and the inventive orchestration of Rabin make it well worth the effort. Likewise, the disc's title track is the heaviest groove the group ever produced. The song also has enough unusual twists and turns to raise even the most stoic eyebrow. The mysterious 'Shoot High Aim Low' and 'Final Eyes' offer many stunning wonders that uphold the tradition of Yes' music beautifully. Finally, Anderson's superior performance on the closing 'Holy Lamb' leaves listeners with plenty to relish.
Jon Anderson, vocals
Trevor Rabin, vocals, guitar, keyboards
Chris Squire, vocals, bass
Tony Kaye, keyboards
Alan White, drums, percussion
Additional personnel:
James Zavala, harmonica, horns
Lee R. Thornberg, horns
Nick Lane, horns
Greg Smith, horns
Recorded at Lark Recording Studios, Caramati, Italy; Sarm East & West Recording Studios, London; Air Recording Studio, London; Southcombe Recording Studio, Los Angeles; Westlake Audio, Los Angeles; Sunset Sound, Los Angeles
Mastered at Precision Lacquer
Engineered by Paul De Villiers and Alan Goldberg
Produced by Trevor Horn and YES
Digitally remastered

Close To The Edge (Remastered)

Going For The One (Remastered)

Time And A Word

Yes is an English rock band who achieved worldwide success with their progressive, art, and symphonic style of rock music. Regarded as one of the pioneers of the progressive genre, Yes are known for their lengthy songs, mystical lyrics, elaborate album art, and live stage sets. No fewer than 18 musicians have been a part of the band's line-up, with its current form comprising singer Jon Davison, bassist Chris Squire, guitarist Steve Howe, drummer Alan White, and keyboardist Geoff Downes. Yes have sold close to 50 million albums worldwide, including 13.5 million certified units in the United States.
Alan White
Alan is considered by many to be one of the greatest rock drummers of all-time. With forty-plus years of performance experience and appearances on over fifty albums, Alan's dossier reads like a who's-who of rock legends. With his consummate professionalism and easy-going nature, Alan continues to be an inspiration to fellow musicians as well as fans.
Chris Squire
Chris was born in London, England in March 1948. Chris began his musical career as a choirboy, which gave Chris a particular insight into choir arrangement and vocal techniques that was to follow him throughout his career. Chris formed YES in 1968 with vocalist Jon Anderson, and is the only member of YES to appear on every studio album.
Geoff Downes
Geoff Downes was born into a musical family in Stockport, England, where his father had been organist and choirmaster at a church. Geoff went to Leeds School of Music in 1971, graduating in 1975, thus becoming the first member of Yes to graduate with a degree in music.
Steve Howe
Born in 1947, Steve began teaching himself to play the guitar at the age of 12, and lists Bill Haley, Les Paul, Jimmy Byant, Speedy West, Barney Kessel, and Chet Atkins as his influences. Steve first joined YES in 1970, and has also been a member of The Syndicats, Bodast, Tomorrow, Asia and GTR. A prolific performer, Steve released his 19th solo album in 2010.