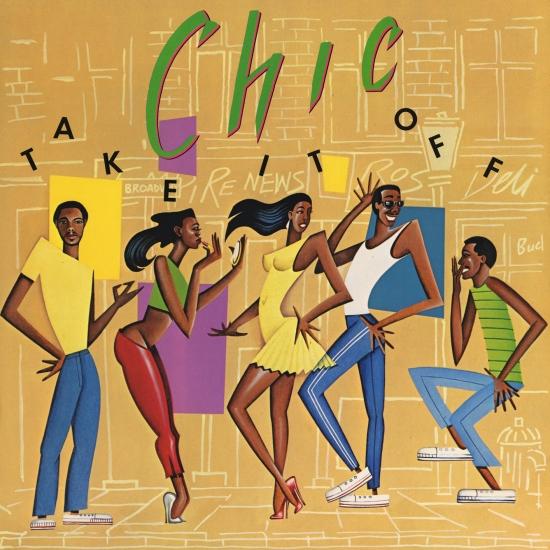 Info zu Take It Off

„In 1981, a lot of rock & rollers were claiming that the disco era was officially over. Disco, of course, never really died -- a lot of the dance-pop, house music, Hi-NRG, and Latin freestyle that was recorded in the '80s and '90s was essentially disco -- but as far as many of the radio stations and record company A&R men of 1981 were concerned, disco was dead. And that was bad news for Chic, a group closely identified with the disco era.
Even though a lot of Chic's work had as much to do with funk and soul as it did with the Euro-disco sound, Chic was unable to live down its reputation as a disco group. But Nile Rodgers and Bernard Edwards gave it a try with 1981's Take It Off, an admirable, if uneven, project that finds the group downplaying the Euro-disco elements.
With R&B and funk as the foundation, Chic tries to branch out by incorporating elements of pop-rock on 'Your Love Is Canceled,' and jazz on 'Flash Back' and 'So Fine' (which shouldn't be confused with the 'So Fine' that Kashif produced for R&B singer Howard Johnson in 1982). In fact, a few of Rogers' guitar solos give the impression that he'd been listening to a lot of Wes Montgomery.
But as likable as the LP is, it didn't contain a major hit -- the single 'Stage Fright' only made it to #34 on Billboard's R&B singles chart. And for a group that had enjoyed #1 pop and R&B smashes only two and three years earlier, that was certainly disappointing.“ (Alex Henderson, All Music)
Nile Rodgers, vocals, guitar
Bernard Edwards, vocals, keyboards
Fonzi Thornton, vocals
Luci Martin, vocals
Alfa Anderson Barfield, vocals
Jacelyn Brown, vocals
Jocelyn Brown, vocals
Alfa Anderson, vocals
Michelle Cobbs, vocals
Lenny Pickett, alto saxophone, tenor saxophone, baritone saxophone
Vinny de la Rocca, tenor saxophone
Michael Brecker, tenor saxophone
Ronnie Cuber, baritone saxophone
Raymond Maldonado, trumpet, flugelhorn, percussion
Randy Brecker, trumpet, flugelhorn
Ray Jones, keyboards
Raymond Jones, keyboards
Robert Sabino, keyboards
Tony Thompson, drums
Roger Squitero, percussion
Manolo Badrena, percussion
Sammy Figueroa, percussion
Recorded and mixed at Power Station, New York, N.Y.
Engineered by W.G. Scheniman and Jason Corsaro
Mastered at Atlantic Studios
Produced by Nile Rodgers and Bernard Edwards
Digitally remastered

CHIC are one of the superpowers of late-’70s disco, a mixed-gender band from New York City that provided some of the biggest and most enduring hits of the Studio 54 era.
Best know for: A pair of epochal #1 pop smashes in “Le Freak” and “Good Times,” as well as club classics like “I Want Your Love,” “Everybody Dance” and “Dance, Dance, Dance (Yowsah, Yowsah, Yowsah).” “Good Times” in particular has provided one of the great through-threads of the last 30 years of pop music, with its legendary bass line appearing (in various incarnations) in pop songs ranging from Queen’s “Another One Bites the Dust” to Daft Punk’s “Around the World”—and, most notably, providing the hook for Sugarhill Gang’s “Rappers’ Delight,” the song that brought hip-hop to the masses.
In addition to the irrepressible “Good Times,” Chic have made their influence felt through the production and songwriting work that group masterminds Nile Rodgers and Bernard Edwards did for other artists of their era, including Sister Sledge (“We Are Family”) and Sheila B. and Devotion (“Spacer”), as well as established artists looking to get on the disco bandwagon like Diana Ross (“Upside Down”) and David Bowie (“Let’s Dance”) and some of the biggest artists from next generation of pop, like Madonna (“Like a Virgin”) and Duran Duran (“A View to a Kill”). Oh, and French dance artist Modjo sampled their “Soup For One” for their 2001 hit “Lady (Hear Me Tonight),” which is pretty cool.