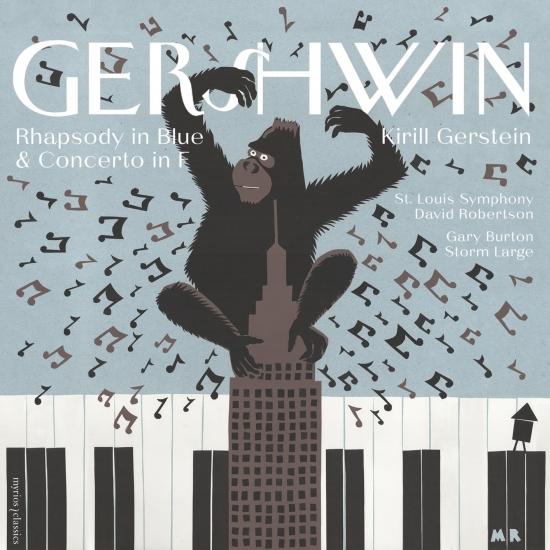 A Gershwin Moment is upon us: Rhapsody in Blue and the Concerto in F — not so long ago marginalized repertoire in limbo between classical and popular genres — are now, unapologetically, concert staples. George Gershwin is finally recognized as an early harbinger of musical synergies that we now take for granted. No longer viewed as an „inspired dilettante,” betwixt and between, the new Gershwin is a confident master, versatile and visionary.
In this album recorded live, pianist Kirill Gerstein explores the music of George Gershwin. Together with conductor David Robertson and the St. Louis Symphony he plays the Concerto in F as well as the original jazz band version of the Rhapsody in Blue. Program also includes a selection of Gershwin songs in solo piano arrangements by the American pianist Earl Wild. The album features Gerstein’s collaboration with two special guests: vocalist Storm Large sings Gershwin’s “Summertime”. Together with the legendary jazz vibraphonist, Gary Burton, Gerstein plays a jazz standard “Blame It on My Youth” written by Gershwin’s close friend, Oscar Levant.
"What [Gerstein] serves up here is living, breathing Gershwin that doesn’t shy from improvisation and yet retains all the crystal clarity and architectural cohesion of his interpretations of Liszt and Brahms.The result is sizzlin’, sassy and smooth, and Robertson and his St Louis musicians are there every spontaneous step of the way...Gerstein’s music-making is direct from the heart, unsentimental but rich in sentiment." (Gramophone Magazine)
"This is a remarkable album. Berlin-based Kirill Gerstein studied jazz piano at Berklee, and is clearly finely attuned to Gershwin’s idiom. Rhapsody in Blue is heard in Grofé’s lean arrangement and the performance accordingly tight. Gerstein includes an interpolated cadenza in the concerto’s slow movement. The first movement is vibrant and the finale buzzes. Thomas Drake’s trumpet solos are impeccably laid back. Superb booklet notes treat Gershwin knowledgeably and seriously. Stunning." (International Piano)
Kirill Gerstein, piano
Storm Large, vocals
Gary Burton, vibraphone
St. Louis Symphony Orchestra
David Robertson, conductor 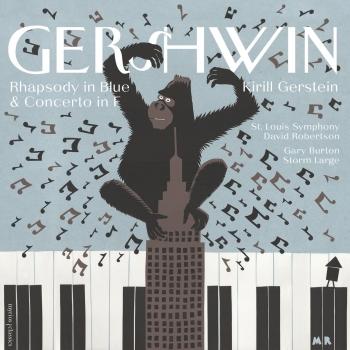 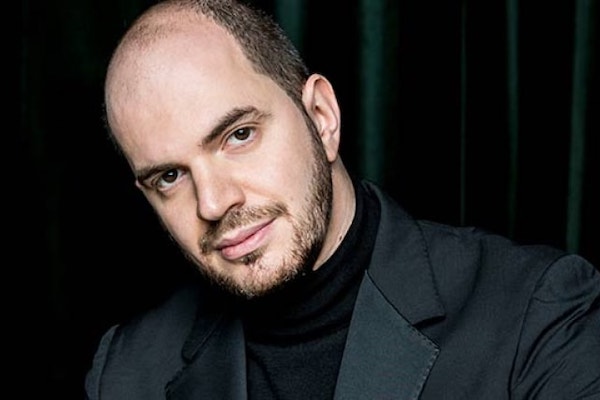 Kirill Gerstein
Gerstein’s heritage combines the traditions of Russian, American and Central European music-making with an insatiable curiosity. These qualities and the relationships that he has developed with orchestras, conductors, instrumentalists, singers and composers, have led him to explore a huge spectrum of repertoire both new and old. From Bach to Adès, Gerstein's playing is distinguished by its clarity of expression, discerning intelligence and virtuosity, and an energetic, imaginative musical presence that places him at the top of his profession.
Born in the former Soviet Union, Gerstein is an American citizen based in Berlin. His career is similarly international with world-wide performances ranging from concerts with the Chicago and Boston Orchestras, the Leipzig Gewandhaus, Royal Concertgebouw, Vienna and Berlin Philharmonics, London Symphony Orchestra and the Bavarian Radio Symphony Orchestra, to recitals in London, Berlin, Vienna, Paris and New York. A long-time believer in the role of teaching, Kirill Gerstein is currently on the faculty of Kronberg Academy and Professor of Piano at Berlin’s Hanns Eisler Hochschule. Under the auspices of Kronberg Academy, his series of free and open online seminars entitled Kirill Gerstein invites is now into its fifth season, featuring conversations with leading musicians, artists, and thinkers. Guest speakers to date have included Ai Weiwei, Andreas Staier, Brad Melhdau, Thomas Adès, Iván Fischer, Alex Ross, Elizabeth Wilson, Simon & Gerard McBurney, Robert Levin, Reinhard Goebel, Simon Callow. Emma Smith, Deborah Borda, Rafael Viñoly, Sir Antonio Pappano and Samuel Jay Keyser.
Over the last year, Gerstein’s decade long relationship with Thomas Adès resulted in the release of two recordings: the world première of Adès’s Concerto for Piano and Orchestra written especially for Gerstein released by Deutsche Grammophon; and a compendium of Thomas Adès’s works for piano on myrios classics. Both discs garnered an impressive series of accolades which included a 2021 International Classical Music Award, a 2020 Gramophone Award and three GRAMMY Award nominations. In May 2021 in Amsterdam, Gerstein premièred another new concerto written especially for him, this time by the Austrian composer Thomas Larcher, co-commissioned by the Berlin Philharmonic, Czech Philharmonic, Netherlands Radio Philharmonic and Vienna Konzerthaus.
Kirill Gerstein’s latest release is a recording of Mozart Four-Hand Piano Sonatas with his mentor of 17-years, Ferenc Rados, for myrios classics. He first collaborated with the label in 2010 and, through the partnership has been able to realise many thoughtfully curated projects including Strauss’s Enoch Arden with the late Bruno Ganz (Wings of Desire; Downfall), recorded shortly before the actor’s death in February 2019; Busoni’s monumental Piano Concerto with the Boston Symphony Orchestra and Sakari Oramo; and The Gershwin Moment with the St Louis Symphony, David Robertson, Gerstein’s jazz mentor Gary Burton and Storm Large. Gerstein has additionally recorded Scriabin with the Oslo Philharmonic and Vasily Petrenko for LAWO Classics; and Tchaikovsky with Semyon Bychkov and the Czech Philharmonic as part of The Tchaikovsky Project released by Decca Classics.
Born in 1979 in Voronezh, Russia, Kirill Gerstein attended one of the country’s special music schools for gifted children and taught himself to play jazz by listening to his parents’ record collection. Following a chance encounter with jazz legend Gary Burton in St. Petersburg when he was 14, he was invited as the youngest student to attend the Berklee College of Music in Boston, where he studied jazz piano in tandem with his classical piano studies. At the age of 16, Gerstein decided to focus on classical music completing his undergraduate and graduate degrees with Solomon Mikowsky at New York’s Manhattan School of Music, followed by further studies with Dmitri Bashkirov in Madrid and Ferenc Rados in Budapest. Gerstein is the sixth recipient of the prestigious Gilmore Artist Award, First Prize winner at the 10th Arthur Rubinstein Competition and an Avery Fisher Career Grant holder. In May 2021, he was awarded an Honorary Doctor of Musical Arts degree from the Manhattan School of Music.