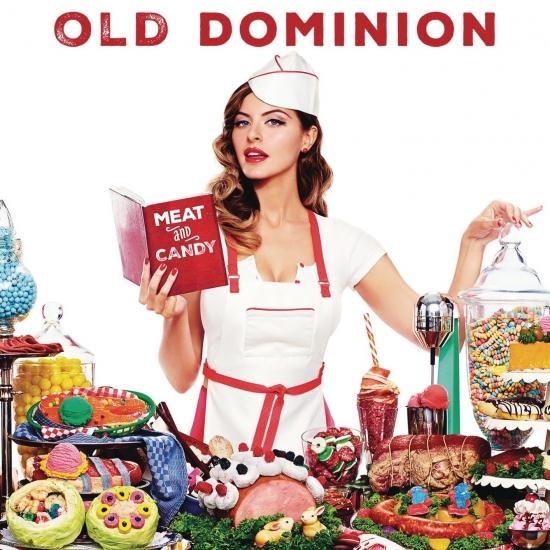 With their rise seemingly meteoric, longtime friends Old Dominion are just the latest example of the 10 year “overnight success” in Nashville. After years of working behind the scenes as songwriters and supporting musicians, the band formed and became favorites of SiriusXM thanks to early support for a couple of songs from their debut EP, two of those songs, “Nowhere Fast” and their break-out hit “Break Up With Him,” currently trending to be not only a Top 10 hit but also a Gold-certified hit at that.
Now, with the success of their self-titled EP in hand, the band has announced the release of their debut album Meat And Candy, set to hit stores November 6, 2015. Produced by the Grammy-winning (and current multiple CMA Award Nominee) Shane McAnally, the album features 11 tracks, four from the previously-released EP and seven new songs.
“This is a HUGE moment for us! We are releasing our debut, major label full length album!” the band exclaims.
“When we were kids sitting in our rooms with our guitars and Rolling Stone magazines, this is THE moment we were imagining for ourselves. As musicians and songwriters, we are very proud of every song on the album. We are looking to turn some heads and make some big noise here. We’re stepping out there on stage with the big boys and girls and our hope is that this album will prove we deserve to be there.”
The five songwriters that make-up Old Dominion include lead singer Matthew Ramsey, multi-instrumentalist Trevor Rosen, drummer Whit Sellers, bassist Geoff Sprung and lead guitarist Brad Tursi. Combined, members of Old Dominion have written hits for artists including Dierks Bentley, Kenny Chesney, Keith Urban, Blake Shelton, Luke Bryan, The Band Perry, Tyler Farr and Sam Hunt; four of which reached No. 1 at country radio.
Adding to the excitement leading up to the release of Meat and Candy the band members have launched “Meet Old Dominion,” a weekly online series to post every Wednesday throughout the month of September. The first two installments introduce lead singer Matthew Ramsey and guitarist, Brad Tursi.
Matthew Ramsey, vocals, guitar
Brad Tursi, guitar
Trevor Rosen, guitar, vocals
Geoff Sprung, bass
Whit Sellers, drums