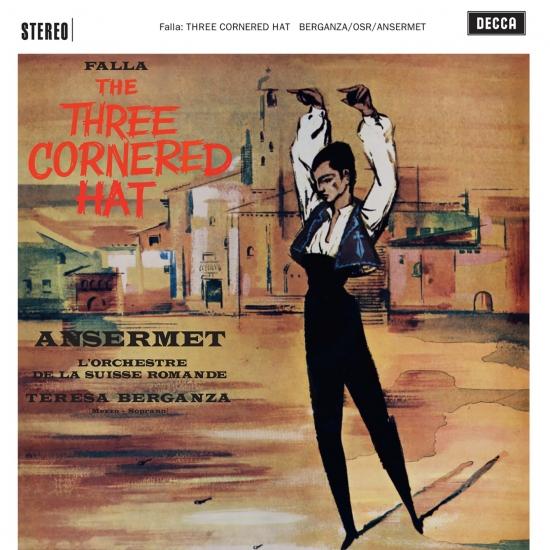 During the war, Falla wrote a pantomime ballet titled El Corregidor y la Molinera (‘The Magistrate and the Miller’s Wife’) based on a novella by Pedro Antonio de Alarcón. Sergei Diaghilev, founder of the Ballets Russes, was at the 1917 premiere. Liking what he saw, Diaghilev imagined that the ballet, with modifications, would be perfect for his then eight-year-old company. Falla accepted the commission, and the new ballet, now called El sombrero de tres picos (‘The Three-Cornered Hat’) was premiered in London in 1919. Diaghilev had intended to have Falla himself conduct the ballet, but the composer quickly realized that he was not up to the task, and so the responsibility went to 35-year-old Swiss conductor Ernest Ansermet, who had conducted the Ballets Russes since 1915.
It has been stunningly re-mastered for this reissue and is coupled with Debussy’s highly picturesque triptych “Images”. This continues the much-lauded Ansermet Legacy on Decca which has systematically mined the Decca archive for re-issues of much valuable material, some of it released on CD for the first time.
“Listening to Ansermet’s early 1960s version of The Three-Cornered Hat, you understand why his recordings are cherished by audiophiles: the sound is glitteringly brilliant and full. The performance has lots of character and shows the conductor and his orchestra on top form […] the Interlude and Dance from La vida breve is especially vivid here.” (Penguin Guide)
„Audiophile reissues presenting the best efforts of post-World War II sound engineers have also in several cases preserved performances that would simply be hard to improve upon. RCA's Living Stereo series has revivified several top-notch albums, and now comes this 1961 recording of Falla's The Three-Cornered Hat with Ernest Ansermet conducting l'Orchestre de la Suisse Romande, and the soprano passages from Teresa Berganza. The handsome packaging preserves much of the original liner text and also evokes that era in another way -- there is a discussion of the technology involved in the remastering, complete with wiring diagrams and the like. Sound nerds will be delighted. But so will ordinary listeners -- this is one of those period sonic extravaganzas that can still stand up to the best recordings made today. And The Three-Cornered Hat, with its kaleidoscopic sequence of instrumental colors, interspersed with a large battery of Spanish percussion, is one of the best palettes ever devised for the sound engineer. Ansermet conducted the ballet's premiere in 1919, with sets by Picasso and dancers from the celebrated Ballets Russes. He knew the work better than any other conductor, and what emerged onto vinyl was a riot of color -- brass, winds, percussion, and vocal "olé!" exclamations. Some unique effects of the original recording -- Berganza and a few of the instrumentalists are placed at some distance from the microphones in order to create a spacious, quasi-live effect -- come through in full color on this remarkable reissue. The famed "Interlude" and "Dance" from La vida breve make for a rousing finale. Thoroughly enjoyable for audiophiles and owners of ordinary equipment.“ (James Manheim, AMG)
Teresa Berganza, mezzo-soprano
L'Orchestre de la Suisse Romande
Ernest Ansermet, conductor
Recorded on 12th & 17th February 1961 at Victoria Hall, Geneva, Switzerland
Produced by James Walker
Digitally remastered 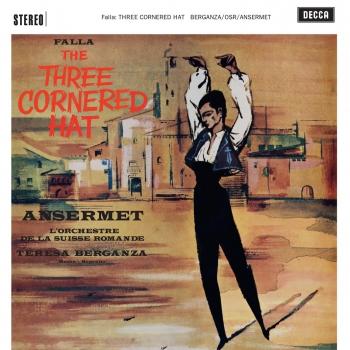