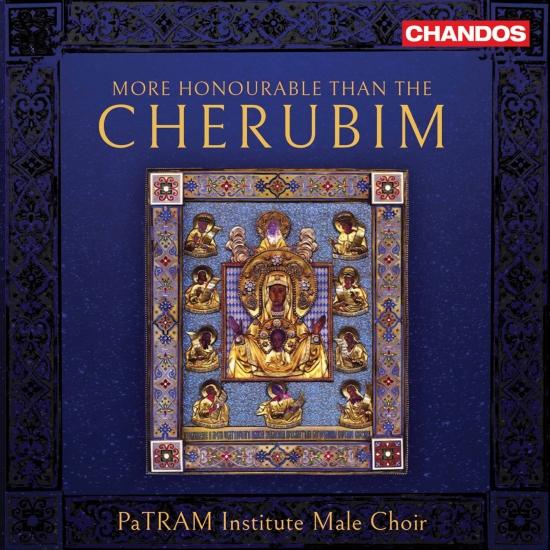 The Patriarch Tikhon Russian-American Music Institute strives to present Russian Orthodox choral music in its highest possible form, uniting deep spirituality, a profound love for the rich traditions of Orthodox Christian singing, and an uncompromising standard of musical professionalism rooted in the great traditions of Russian choral composers. The 2019 PaTRAM Institute Recording Project was to record the sacred works of Alexander Gretchaninoff, but as the project was in development, His Eminence Metropolitan Hilarion (Kapral), First Hierarch of the Russian Orthodox Church outside Russia, had granted his special permission and blessing to allow the 725-year-old wonderworking Kursk Root Icon of the Mother of God of the Sign to travel with the PaTRAM Choir to the recording location in Saratov, Russia. The timing of the recording also coincided with the Feast of the Dormition of the Mother of God. In honour of this event, the repertoire was changed to a compendium of sacred masterpieces by various composers, glorifying the Most Holy Lady Theotokos. The album brings together singers from five countries, including an unprecedented nine octavists, to form the fifty-six-member international PaTRAM Institute Male Choir.
Mikhail Davydov, bass-baritone
PaTRAM Institute Male Choir
Vladimir Gorbik, conductor 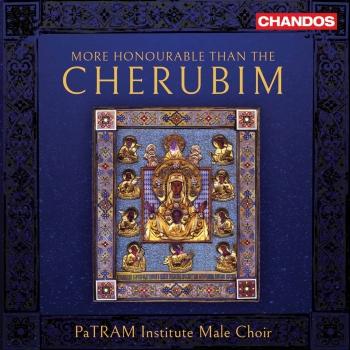 More Honourable Than the Cherubim 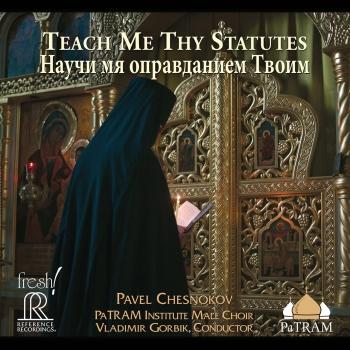 Teach Me Thy Statutes 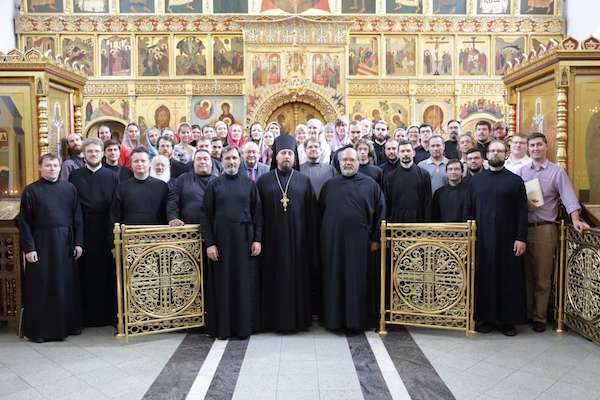 PaTRAM Institute Male Choir
The mission of PaTRAM is to cultivate and promote the beauty and spiritual depth of Russian Orthodox liturgical arts in general and choral singing in particular, in both the English and Slavonic Languages. PaTRAM seeks to utilize rigorous educational programs, distinctive performance events, and the latest technological tools to realize this mission and founding principle.
A Tradition of Orthodox Church Singing: Orthodox Christian liturgical worship cannot take place without singing. In the Russian Church, a glorious tradition of church singing dates back at least a thousand years. Even in the smallest towns and villages of Russia the standard “staff” of a church included an ordained priest and a tonsured psalm chanter whose responsibility was to organize and lead the choir and teach the children.
Through the centuries, skilled interpreters, professionally trained musicians fulfilling a unique calling—Bortniansky, Arkhangelsky, Orlov, Danilin, Chesnokov and others—led choirs that have united the hearts and spirits of generations of Orthodox worshipers in prayer. Even in the difficult circumstances of the emigration (diaspora), men such as Jaroff, Hilko, Afonsky, Ledkovsky, Evetz, and Konstantinov continued to labor in the vocation as professional choirmasters.
The Situation Today: As the faithful of many nations have honored Christ’s commandment to “Go into all the world and make disciples of all Nations,” the Orthodox Faith has spread throughout the North American continent. Today new mission parishes are being planted all over North America, gathering scattered descendants of immigrants and attracting numerous new converts. A half-dozen seminaries train clergy. The number of monasteries has grown from just a handful a few decades ago to many dozens. Through the beauty of the Liturgy—liturgical prayer and singing—heard increasingly in an understandable language, people are discovering the fullness and depth of Orthodox worship in spirit and in truth.
Vladimir Gorbik
(b. 1970) began his musical studies in Yekaterinburg, Russia, and continued them at the Moscow State Conservatory, completing a specialization in choral conducting in 1998 and in orchestral conducting in 2000. Since 1996 he has served as the choir director at the Moscow Respresentation Church (Metochion) of the Holy Trinity-St. Sergius Monastery, and since 1998 has been the Artistic Director and Conductor of the professional men’s chorus formed at the Metochion. With this choir he has made more than a dozen outstanding recordings, of both liturgical services and concert programs. The choir has on numerous occasions sung at Patriarchal services in the Dormition Cathedral in the Kremlin, and they accompanied Patriarch Alexy II on his trip to the Holy Land in 2000. The repertoire of the Metochion’s Men’s Chorus cultivates the finest repertoire and interpretive traditions of the Moscow School and the Holy Trinity-St. Sergius Lavra. For his outstanding achievements and service, he has received an award of recognition (gramota) from the Patriarch, and the medal of the Order of St. Sergius of Radonezh, 2nd Degree. In September 2012, he was appointed to the conducting faculty of the Moscow State Conservatory. Since then he was awarded awarded a “Blessed Letter of Commendation” by Merkuriy, Metropolitan of Rostov and Novocherkassk , chairman of the Synodal Department for Religious Education and Catechesis of the Russian Orthodox Church, for the January 29, 2014 participation of the Men’s Choir of the Moscow Representation of Holy Trinity-St. Sergius Monastery (Lavra) in the Kremlin Concert Hall and the Concert Hall of the Cathedral of Christ the Savior in the context of the XXII International Christmas Educational Readings.