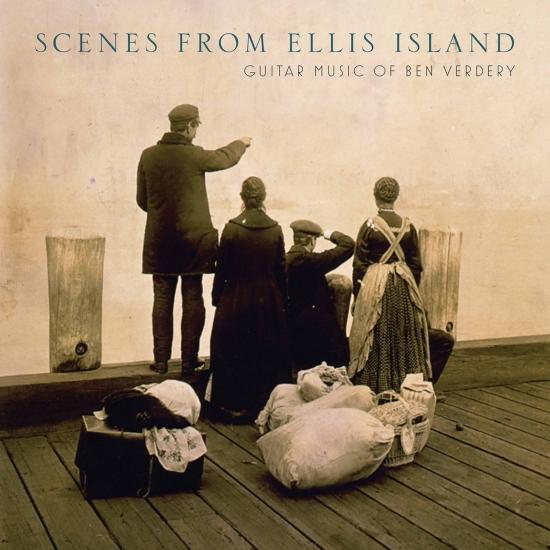 Guitarist and composer Ben Verdery's music is expressive of his infectious enthusiasm and omnivorous appetite for diverse sources of inspiration. Comprised of a mix of solos and duos, and the large guitar ensemble title piece, heard here in a multi-track recording, "Scenes from Ellis Island, draws on world music, gospel, pop music, and virtuosic guitar composition in a collection of works that feature his energetic and affecting performances.
Opening the recording is the duo What He Said, performed here with guitarist Simon Powis. Verdery draws on the energy of American vernacular music in the track, citing the gospel of Aretha Franklin and the blues inflected country music of Lyle Lovett as specific jumping off points for the piece. Toggling back and forth between jagged call and answer quartal textures and pentatonic grooves, the exuberant opening leads into a reflective chordal middle section before returning to an expanded exploration of the initial material to close the piece.
Now and Ever is a solo work originally written for Scottish guitarist David Russell. Written in an alternate tuning involving an unconventional half step between a 3rd string A and a second string A#, Verdery organizes the pitch material of the two movement piece around the minor second interval. The first movement is meditative at first, becoming gradually more rhapsodic as Verdery uses across the string campanella fingerings for harp-like flourishes and insistent ostinato figures to shape the unfolding texture. The second movement is more active, opening with a series of sharply strummed chords that descend chromatically and become a structural pillar throughout the movement. Verdery navigates through these voicings in several ways, arpeggiating them as he rotates inner voices around into various permutations, and introducing harmonics as central pitches around which other pitches whirl with cathartic energy. Towards the end of the movement, Verdery introduces a tender tremolo passage that floats between minor and major modalities.
From Aristotle is a four movement work for mixed vocal artist and guitar, co-composed by Verdery and collaborator Mark Martin. The text is drawn directly on Aristotle's writings on linguistics. Martin brings a varied arsenal of extended vocal techniques to his performance, including ethereal wind sounds, Tuvan throat singing, and beat boxing. Together, Verdery and Martin's setting of the text alternates between direct word painting and a more abstract expression of the text, in a piece that doubles as a narrative reading of these ancient texts and a nostalgic paean to their embedded meaning. It closes with what Verdery describes as a "baroque/gospel guitar lament."
the rain falls equally on all things is a thirteen minute solo fantasy inspired by Schubert's famous art song, Nachtstück. Opening with a mixed texture of percussive sounds, harmonics, and bluesy interjections, Verdery proceeds to take the main motivic material emerging from this passage and present it in many guises, key centers, and characters. A sequential passage over a pedal point diffuses into ethereal arpeggios that draw the listener into the guitar's subtle resonance. Verdery integrates pizzicato and glissando and repeated pitches in an evocative "rain drop" passage. The opening percussive texture returns briefly before the title of the piece is sung in a lyrical end to this ambitious solo work.
Scenes from Ellis Island for guitar ensemble was commissioned by a Staten Island high school music program, the borough of New York City closest to the location so symbolic to the history of the immigrant experience in the United States. Verdery was struck by the awareness that the students premiering the piece would experience Ellis Island as part of their weekly or daily lives, on the way to and from Manhattan on the Staten Island Ferry, and, visiting the island's museum, discovered the photography exhibit filled with depictions of the hardship and perseverance of those who passed through there. The work is sectional, covering a wide range of stylistic and timbral territory. A pointillistic minimalist texture towards the opening leads gradually into driving chordal material over which Malian singer Hawa Kassé Mady Diabaté (daughter of the legendary singer Kassé Mady Diabaté) makes her first soulful entrance. The first of two solo guitar soliloquies follows, a delicate interlude. Chromatic alternating chords provide the foundation for stabbing glissando chords across the ensemble in the subsequent accumulating section, which ascends beyond the fretboard into a swarm of high unpitched plucks. The sound of bottleneck slides (some imitating seagulls presumably from the New York Harbor), scraping coins along the strings, and Bartok pizzicati function as foley sounds of sorts accompanying a pre-recorded chorus of voices speaking in various languages, a melange that captures the polyglot ethnic makeup of New York, a city of immigrants. An ostinato of descending slurs propels the next passage forward into the second, more virtuosic solo. Percussive non-pitched strumming establishes an East Indian rhythmic cycle (6-6-6-5-5-5-4-4-4-3-3-3-2-2-2), opening up into a lyrical cello solo performed by Guilherme Nardelli Monegatto, which leads to Diabaté's final climactic improvised solo in her native language, Bamana. Scenes from Ellis Island is a rousing close to an album which perfectly captures Ben Verdery's virtuosity, eclectic compositional style, and gracious spirit.
Ben Verdery, guitars
Simon Powis, guitar
Guilherme Nardelli Monegatto, cello
Hawa Kasse Mady Diabate, vocals
Produced by Matthew LeFevre, Ben Verdery and Solomon Silber 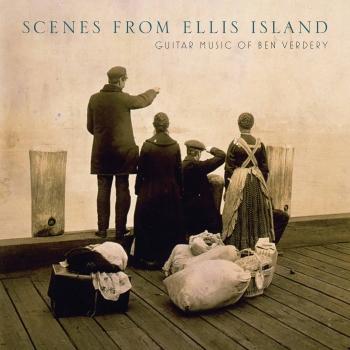 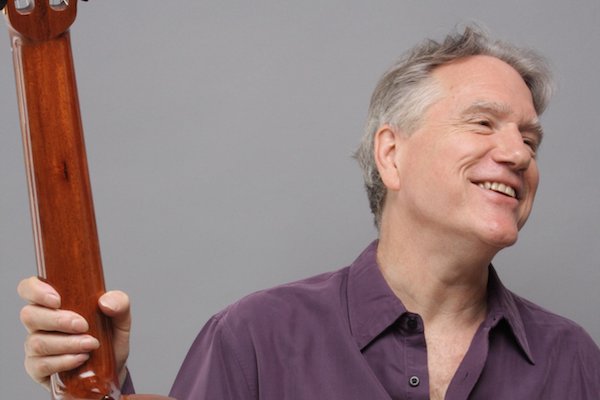