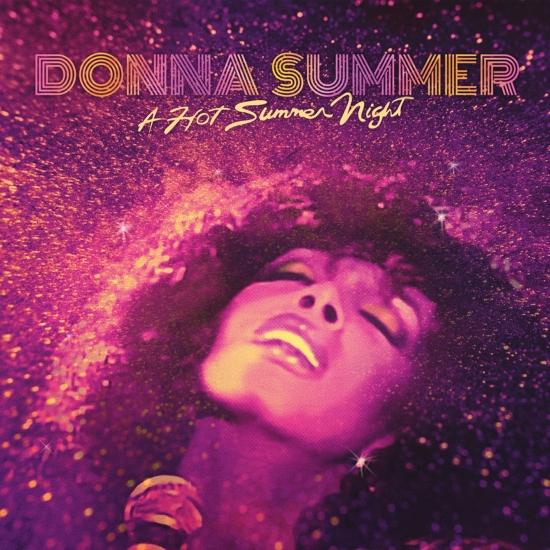 Label: Driven by The Music

A Hot Summer Night was filmed and recorded live on 6th August 1983, at the Pacific Amphitheatre in Costa Mesa, CA, with an audience of 18,000 fans, during the second-leg of Donna Summer’s 1983 Hard For The Money tour, which supported the recently released She Works Hard For The Money album.
Restored from the analogue video tapes, this is the concert’s debut album release and therefore the makes it a perfect sequel to 1978’s Live And More. The set-list includes MacArthur Park, Love Is In Control..., Bad Girls Medley, On The Radio and Last Dance, as well as performances with special guests Musical Youth, her sisters Dara and Mary Ellen on an extended showpiece version of Woman, as well as closing the show with her eldest daughter Mimi, performing State Of Independence.
Donna Summer, vocals
Nicholas Brown, guitar
Jeff Lams, keyboards
John Schreiner, keyboards
Mari Falcone, keyboards
Warren Ham, saxophone, backing vocals
Keith Nelson, bass
Paul Bahn, drums
Nathan Alford, percussion
Dara Bernard, backing vocals
Mary Bernard, backing vocals
Recorded live at the Pacific Amphitheater in Costa Mesa, California on August 6, 1983 to crowd of 18,000
Digitally remastered

Love To Love You Baby (Remastered)

Love To Love You Donna

On The Radio: Greatest Hits Volumes I & II (Remastered)

Once Upon A Time

Donna Summer
Maintaining an unbroken string of hits throughout the 70s and 80s, most of which she wrote, Donna Summer (1948-2012) holds the record for most consecutive double albums to hit #1 on the Billboard charts (three) and is the first woman to have four #1 singles in a twelve-month period, three as a solo artist and one as a duo with Barbra Streisand. A five-time Grammy Award-winner, she was the first artist to win the Grammy for Best Rock Vocal Performance, Female (1979, "Hot Stuff"), as well as the first-ever recipient of the Grammy for Best Dance Recording (1997, "Carry On").
She held six American Music Awards, three consecutive #1 platinum double albums (she’s the only artist, male or female, ever to accomplish this), 11 gold albums, four #1 singles, 2 platinum singles, and 12 gold singles. Donna was also the first female artist to have a #1 single and #1 album on the Billboard charts simultaneously (“MacArthur Park” and Live & More, 1978), a feat she also repeated six months later (“Hot Stuff” and Bad Girls, 1979). She has charted 21 #1 hits on the Billboard Disco/Dance charts over a period of 25 years, a milestone solidifying her as THE Queen of Dance. In 2004, she became one of the first inductees, as both an Artist Inductee and a Record Inductee (for 1977's "I Feel Love") into the Dance Music Hall of Fame in New York City.
In 2013, Donna Summer was inducted into the Rock & Roll Hall of Fame. It is estimated that Ms. Summer has sold more than 130 million records worldwide.