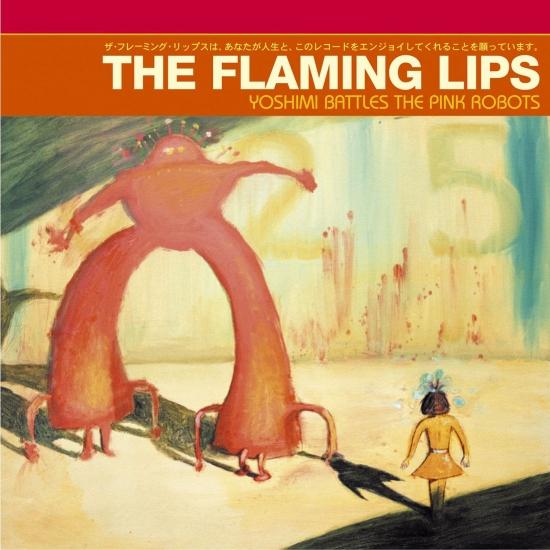 The Flaming Lips 2002 "Yoshimi Battles the Pink Robots" is inarguably one of their best works. The album has now been made into a play allowing the main character to add one more thing to her resume along with working for the city, being a black belt in karate, and defeating evil machines.
Aarkon Sorkin, the screenwriter responsible for A Few Good Men and the fast-paced dialogue of The Social Network was originally signed on, but backed out when it was decided it would be ‘sung through.” Jersey Boys' Des McAnuff has stepped in to write and direct the play with frontman Wayne Coyne.
"It's a big deal. It's hokey and wonderful and poignant and powerful,” Coyne told Billboard. “It's really become a perfect combination of my fantastical robot-world vision and [McAnuff's] little, internal, humanistic version of what that music is. I really believe it could work - and luckily I don't have to do much!"
Thirty songs will be used, including tunes from The Soft Bulletin and At War with the Mystics. Expect it to be trippy, futuristic, and one of the few musicals that attracts those high on shrooms.
"The long-reigning kings of big-sky psychedelia emerge from their Oklahoma City bunker to ask this musical question: If the Powerpuff Girls took on Black Sabbath's "Iron Man," who would win? The answer, in this case, is the listener. Yoshimi Battles the Pink Robots isn't the end-to-end triumph that was 1999's The Soft Bulletin, still the most beauteous of Lips albums. But the production is equally ambitious, with burbling electrobeats underpinning sci-fi orchestrations that sound like the brainchild of Esquivel and the Orb. Techno isn't the band's forte, as "Yoshimi Battles the Pink Robots Pt. 2" demonstrates. But elsewhere the trio's love of sound sorcery is gently folded into gorgeous melodies such as "In the Morning of the Magicians," "Are You a Hypnotist??" and "Do You Realize?" "All we have is now," Wayne Coyne sings, and the Lips sound absolutely ecstatic to be living in the moment." (Greg Kot, Rolling Stone Maganzine)
Wayne Coyne, guitar & vocal
Michael Ivins, bass & vocal
Steven Drozd, drums & vocal
Producer: Scott Booker
Recorded at Tarbox Road Studios in Cassadaga, New York, June 2000 - April 2002.

Seeing The Unseeable: The Complete Studio Recordings Of The Flaming Lips 1986-1990 (Remastered)

Scratching The Door: The First Recordings Of The Flaming Lips (Remastered)

The Dark Side of the Moon (Remastered)

The Flaming Lips and Stardeath And White Dwarfs

Transmissions from the Satellite Heart (Remastered)

Hit to Death in the Future Head (Remastered)

At War With the Mystics (Remastered)