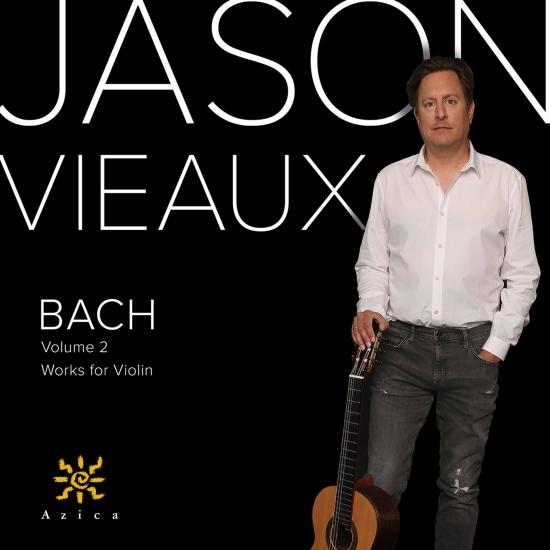 So, “Bach Volume 2”... this would indicate there was some kind of a “Volume 1”, right?... some background is needed for anyone who cares to read about the genesis of this particular release.
"Indeed, it's been well over a decade since the 2009 issue of three lute works of Johann Sebastian Bach (1685-1750), Bach Vol. 1, Works For Lute, was out on Azica. The idea Azica and I had back then was that there would eventually be a Volume 2, which would complete the 'lute' set by making a 'violin' record that included BWV 1006... Well, 'eventually' turned out to be about 13 years, 2 kids, 700 more gigs, and over 8 hours of commercial releases later.
"Appointments, marriage, raising kids, care for aging parents, the departure of so many important and dear people, massive changes to the music business, whatever it may be... one of the great things about Bach's music is that it's always just there, for us to continually explore. His music doesn't need anything. It is not only comforting and inspiring in its musical greatness, it's humbling in how his notes, phrases, structures, compositional decisions, harmonic details, etc, are seemingly all-knowing (divine) and expressive (mortal) all at once, which is always a great respite in such a turbulent world. Every note gives the feeling that Bach has totally been there, done that, but somehow 1000 times more.
"I suppose his music can serve as a reflection of a personal moment, experience, a soundtrack to one's life, but I never hear it that way. Bach is completely timeless, ageless, 'style'-less. It represents what 'great' or 'awesome' actually means... With Bach, I always try to just play what's there; the difficult thing with Bach's music on guitar is that there's a daunting, awesome, rewarding, gratifying amount of 'there' there. So, I hope that keeps growing, developing, changing, as my navigation of the guitar as an instrument continues to do the same. And I hope you will enjoy this latest snapshot of where I'm at on that particular journey." (Jason Vieaux)
Jason Vieaux, classical guitar 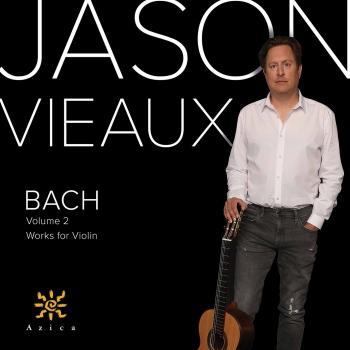 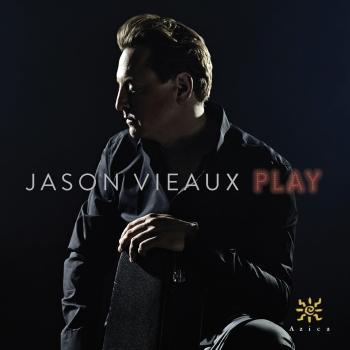 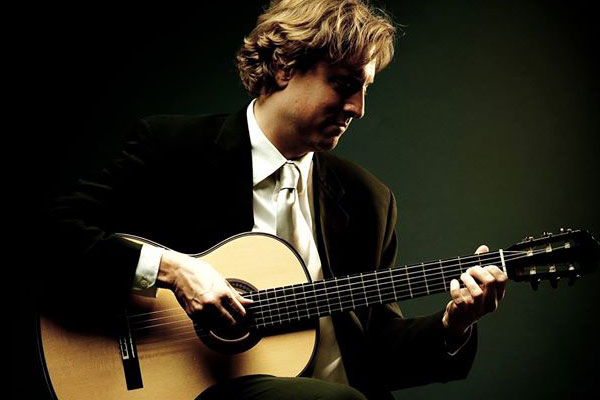 Jason Vieaux
NPR describes Grammy-winning guitarist Jason Vieaux as, “perhaps the most precise and soulful classical guitarist of his generation,” and Gramophone magazine puts him “among the elite of today's classical guitarists.” His most recent solo album, Play, won the 2015 Grammy Award for Best Classical Instrumental Solo. In June 2014, NPR named “Zapateado” from the album as one of its “50 Favorite Songs of 2014 (So Far).”
Vieaux has earned a reputation for putting his expressiveness and virtuosity at the service of a remarkably wide range of music, and his schedule of performing, teaching, and recording commitments is distinguished throughout the U.S. and abroad. His solo recitals have been a feature at every major guitar series in North America and at many of the important guitar festivals in Asia, Australia, Europe, and Mexico. Recent and future highlights include returns to the Caramoor Festival, Philadelphia Chamber Music Society, and New York's 92nd Street Y, as well as performances at Argentina’s Teatro Colon and Oslo, Norway’s Classical Music Fest. Vieaux’s appearances for Chamber Music Society of Lincoln Center, Music@Menlo, Strings Music Festival, Grand Teton, and many others have forged his reputation as a first-rate chamber musician and programmer. He collaborates in recitals this season with Escher Quartet, acclaimed harpist Yolanda Kondonassis, and accordion/bandoneón virtuoso Julien Labro. Vieaux’s passion for new music has fostered premieres of works by Dan Visconti, David Ludwig, Jerod Tate, Eric Sessler, José Luis Merlin and Gary Schocker.
Jason Vieaux has performed as concerto soloist with nearly 100 orchestras, including Cleveland, Houston, Toronto, San Diego, Ft. Worth, Santa Fe, Charlotte, Buffalo, Grand Rapids, Kitchener-Waterloo, Richmond, Edmonton, IRIS Chamber, Chamber Orchestra of Philadelphia, Chautauqua Festival, and New Hampshire Music Festival. Some of the conductors he has worked with include David Robertson, Miguel Harth-Bedoya, Jahja Ling, Stefan Sanderling, Michael Stern, David Lockington, Steven Smith, and Edwin Outwater.
Vieaux continues to bring important repertoire alive in the recording studio as well. His latest album Together, with harpist Yolanda Kondonassis, was released in January 2015. Of his 2014 solo album Play, Soundboard Magazine writes, “If you ever want to give a friend a disc that will cement his or her love for the guitar, this is a perfect candidate,” while Premier Guitar claims, “You’d be hard pressed to find versions performed with more confidence, better tone, and a more complete understanding of the material.”
Vieaux’s previous eleven albums include a recording of Astor Piazzolla’s music with Julien Labro and A Far Cry Chamber Orchestra; Bach: Works for Lute, Vol. 1, which hit No. 13 on Billboard’s Classical Chart after its first week and received rave reviews by Gramophone, The Absolute Sound, and Soundboard; Images of Metheny, featuring music by American jazz legend Pat Metheny (who after hearing this landmark recording declared: “I am flattered to be included in Jason's musical world”);and Sevilla: The Music of Isaac Albeniz, which made several Top Ten lists the year of its release. Vieaux’s albums and live performances are regularly heard on radio and internet around the world, and his work is the subject of feature articles in print and online around the world, including such magazines as Acoustic Guitar, MUSO, Gramophone, and on NPR’s “Deceptive Cadence.” Vieaux was the first classical musician to be featured on NPR’s popular “Tiny Desk” series.
In 2012, the Jason Vieaux School of Classical Guitar was launched with ArtistWorks Inc., an unprecedented technological interface that provides one-on-one online study with Vieaux for guitar students around the world. In 2011, he co-founded the guitar department at The Curtis Institute of Music, and he has taught at the Cleveland Institute of Music since 1997, heading the guitar department since 2001.
Vieaux is a member of the Advisory Board of the Guitar Foundation of America, and is affiliated with Philadelphia’s Astral Artists. His primary teachers were Jeremy Sparks and John Holmquist. In 1992 he was awarded the prestigious GFA International Guitar Competition First Prize, the event’s youngest winner ever. He is also honored with a Naumburg Foundation top prize, a Cleveland Institute of Music Alumni Achievement Award, and a Salon di Virtuosi Career Grant. In 1995, Vieaux was an Artistic Ambassador of the U.S. to Southeast Asia.