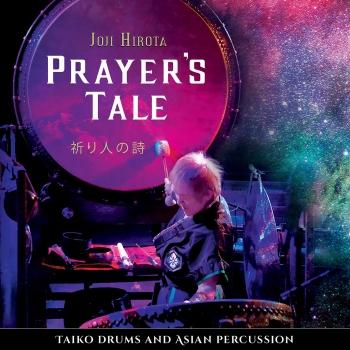 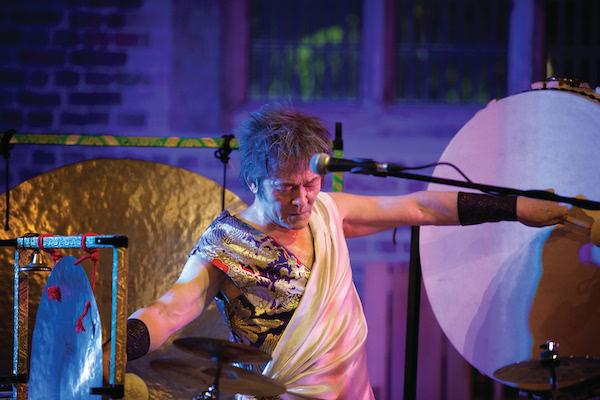 Joji Hirota
Percussionist, composer, singer, flautist - Joji Hirota joyously eludes definition. Trained as a classical musician in his native Japan, he has now spent over half his life in England freely blending instruments and influences to create a music that is uniquely his own. His flute sounds like singing, his singing sounds instrumental, and his drums sound like nothing on earth.
Joji Hirota was born in Hokkaido in North Japan. He began to study percussion at the age of eleven and by the time he was thirteen he was composing his own music. He went on to study at the Kyoto Municipal Arts University.
In 1972 he was invited to come to England by the illustrious Stomu Ymashta to be Musical Director and Percussionist of the Red Buddha Theatre. This was a turning point. As Joji himself says, but for that invitation he might have stayed with the Nagoya Philharmonic Orchestra playing Beethoven’s 5th for the rest of his life. It led to Joji becoming Musical Director and Solo Percussionist for the Lindsay Kemp Dance Company in 1977, presenting shows in Europe, Canada, South America and Japan. In 1991 the company won the Time Out award for Best Dance Company for their production ‘Onnagata,’ for which Joji wrote and performed the music.
Joji found England such an exciting place to be, “so full of possibilities,” that he has lived here ever since. The serious interest in folk music in the West inspired him to explore the folk music of his own culture long before it was taken seriously back in Japan. He denies that he is mixing traditions.
The distinction is an important one and Joji, whose English is fluent and flawless, hesitates and uses the word ‘weapon’ before quickly changing this to the more acceptably Western concept of ‘style.’ Joji Hirota’s work with the Real World label began during the 1992 Recording Week at Real World Studios, when he collaborated with Clannad founder Pól Brennan and Chinese flautist Guo Yue to record Trísan, an album which won that year’s Tower Records Critics Award in New York for Contemporary Instrumental music. Capturing the mastery and rhythmic grace of this outstanding multi-instrumentalist, The Gate is Joji Hirota’s 1999 solo release with Real World. Its epic tracks describe expanses of sea and sky conveyed with heart-stopping emotion; there is joy and exaltation, sorrow and yearning, and always virtuosic artistry, resulting in a deeply meditative and breathtaking listen.