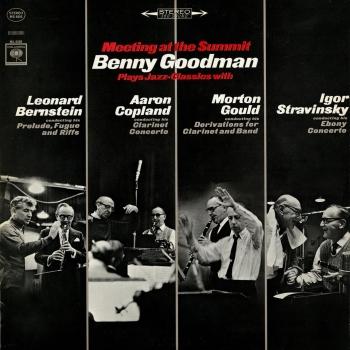 Meeting at the Summit

Benny Goodman
For a kid who liked jazz, Chicago was a great town to grow up in. Musicians had begun working their way north from New Orleans about the turn of the century, and by the early 1920s giants like "Jellyroll" Morton, Sidney Bechet, "King" Oliver and Louis Armstrong were playing in Chicago and making history.
Kids who paid attention to this development were going to make history themselves in a few more years - Bud Freeman, Davie Tough, Eddie Condon, Milt Mesirow (Mezz Mezzrow), Gene Krupa, "Muggsy" Spanier, Jimmy McPartland, Jess Stacy - and a kid in short pants who played the clarinet.
Benny Goodman was only 10 when he first picked up a clarinet. Only a year or so later he was doing Ted Lewis imitations for pocket money. At 14 he was in a band that featured the legendary Bix Beiderbecke. By the time he was 16 he was recognized as a "comer" as far away as the west coast and was asked to join a California-based band led by another Chicago boy, Ben Pollack.
Goodman played with Pollack's band for the next four years. His earliest recording was made with Pollack, but he was also recording under his own name in Chicago and New York, where the band had migrated from the west coast. In 1929, when he was just 20, Benny struck out on his own to become a typical New York freelance musician, playing studio dates, leading a pit orchestra, making himself a seasoned professional.
By 1934 he was seasoned enough to be ready for his first big break. He heard that Billy Rose needed a band for his new theatre restaurant, the Music Hall, and he got together a group of musicians who shared his enthusiasm for jazz. They auditioned and got the job.
Then Benny heard that NBC was looking for three bands to rotate on a new Saturday night broadcast to be called "Let's Dance," a phrase that has been associated with the Goodman band ever since. One band on the show was to be sweet, one Latin, and the third hot. The Goodman band was hot enough to get the job, but not hot enough to satisfy Benny. He brought in Gene Krupa on drums. Fletcher Henderson began writing the arrangements - arrangements that still sound fresh more than a half century later. And the band rehearsed endlessly to achieve the precise tempos, section playing and phrasing that ushered in a new era in American music. There was only one word that could describe this band's style adequately: Swing. www.bennygoodman.com