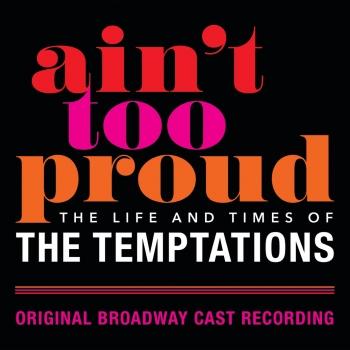 Ain't Too Proud: The Life And Times Of The Temptations (Original Broadway Cast Recording) 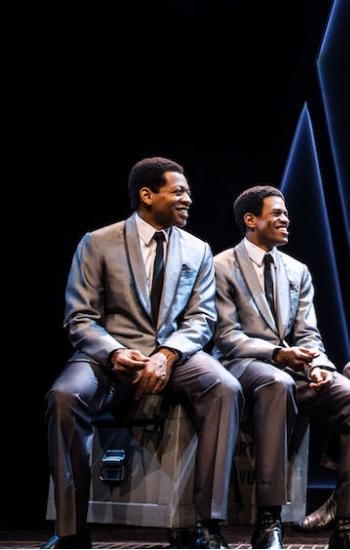 The Temptations
are the embodiment of harmony, dignity and class. They are the most popular male vocal and soul group in the world. And they have influenced every ensemble that has followed in their footsteps, from old-schoolers the Delfonics to New Edition, from Jodeci, to BLACKstreet, and from Dru Hill to one of the biggest selling artists in history, Boyz II Men.
The Temptations were born in Detroit in 1961, a marriage of members of the Distants and the Primes, and signed to Motown. “Dream Come True” became the group’s first chart hit, peaking at no. 22 R&B in 1962. Baritone Otis Williams, bass Melvin Franklin and tenors Eddie Kendricks and Paul Williams (no relation to Otis) were joined in late 1963 by tenor David Ruffin. Recording with writer/producer Smokey Robinson, they helped define the Motown Sound. In 1964, they emerged with the pop smash “The Way You Do The Things You Do,” with Kendricks in the lead. In 1965, “My Girl,” led by Ruffin, became their first no. 1 pop and R&B hit, and their first signature song. Other hits with Smokey writing and producing were “It’s Growing,” “Since I Lost My Baby,” “My Baby” and “Don’t Look Back.”
They hit no. 1 R&B again with “Get Ready” in 1966. While guided by harder-edged, hard-driving producer Norman Whitfield, the Temptations scored the soul soundtrack for the late sixties with the hits “Ain’t Too Proud To Beg,” “Beauty Is Only Skin Deep,” “(I Know) I’m Losing You,” “You’re My Everything” and “I Wish It Would Rain.”
As the times grew psychedelic, so too did the sound of The Temptations, who replaced Ruffin with Dennis Edwards in 1968. Temptations songs punctuated the era, from “Cloud Nine” (which earned Motown its first Grammy) and “Run Away Child, Running Wild” to “Psychedelic Shack” and “Ball Of Confusion (That’s What The World Is Today).” Deftly balancing romance and social consciousness, they teamed with Diana Ross & The Supremes, hitting no. 2 pop with “I’m Gonna Make You Love Me” and the following year had a pop no. 1 on their own with “I Can’t Get Next To You.” With their vocal harmonies matched by their tailored suits and precise choreography, including the famed “Temptation Walk,” they broke down barriers of race and age.
After 1971’s pop no. 1 “Just My Imagination (Running Away With Me),” Kendricks exited, followed by Paul Williams. Enter Damon Harris and Richard Street, a former member of the Distants, and the Temptations didn’t miss a beat. “Superstar (Remember How You Got Where You Are)” was followed by Whitfield’s magnum opus, “Papa Was A Rollin’ Stone.” The dramatic, 12-minute long album version was edited to (a still-long) seven minutes for the single that hit no. 1 pop and won two Grammys. After the masterful “Masterpiece,” another producer was tapped, and the group scored with “Happy People,” “Shakey Ground” and “Glasshouse.”
With Edwards’ exit, the Temptations in 1976 left Motown for Atlantic Records and a flirtation with disco but returned in 1980. With Edwards back in the fold, they hit no. 11 R&B with the powerful “Power.” Two years later, Ruffin and Kendricks briefly returned too for the Reunion album and its “Standing On The Top Pt. 1,” which was produced by hot Motown funkster Rick James. Coming on board in 1984 was Ali “Ollie” Woodson, and the group rolled into the eighties refining a sophisticated adult contemporary soul with R&B Top 10s “Treat Her Like A Lady,” “Lady Soul” and “Special.”
In 1991, Rod Stewart collaborated with The Temptations on “The Motown Song.” In 1995, with Woodson sharing leads with newbie Theo Peoples, the group released For Lovers Only, among the great vocal records of the modern soul era. It proved to be Melvin Franklin’s last album with the group. Three years later, the Temptations released the platinum Phoenix Rising, which included another R&B no. 1, “Stay,” led by Peoples and deftly produced by Narada Michael Walden. Also in 1998, a NBC mini-series on their career was an Emmy-winning ratings blockbuster.
The Temptations’ new millennium success has included the Grammy-winning Ear-Resistable as well as Awesome and Legacy. The Temptations, who were on Motown longer than any artist other than Stevie Wonder, also earned their 35th gold or platinum award. Now on Universal Music’s New Door Records, The Temptations continue to raise the bar for all singing groups. Reflections, releasewd in 2006, received a Grammy nomination for their version of Marvin Gaye’s “How Sweet It Is (To Be Loved by You).” The following year, the acclaimed Back To Front was their 48th album of new recordings. On May 4, 2010, The Temptations released their 49th CD entitled "Still Here" on their own label 10/30 International ( distributed by Universal Music)
The CD “Still Here” is a concept album of great new songs that chronicles the history of the Temptations. Starting with the present day and going back to their roots, the songs on this new CD are reminiscent of the song writing styles that made the Temptations the most iconic vocal group in the history of American R&B/pop music.
Starting with the contemporary “Change has Come” into some smooth & sexy urban grooves “One of a Kind Lady”, a classic R&B/pop ballad “Still Here with Me”, the socially edgy “Listen Up” to the retro hit “Soul Music” and ending with “Going Back Home” this album truly delivers the goods. A great musical testament to the upcoming 50-year Anniversary of the Temptations.
The Temptations can claim 43 Top 10 R&B singles (14 no. 1) and 17 pop Top 10s (four no. 1). In 1989, they were inducted into the Rock and Roll Hall of Fame.
The Temptations are timeless icons. The way they did what they did was, and remains, incomparable.