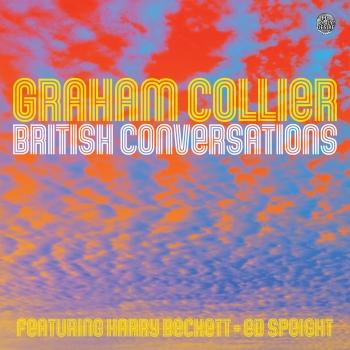 Graham Collier (1937-2011)
is one of the best known and most important British jazz composers and over a 40 year career, his list of compositions and commissions has grown to encompass ensembles around the world. He is well-known as an author and educator, having written seven books on jazz.
Composer Graham Collier (1937-2011) was one of the principal driving forces behind the evolution of British jazz during the late 1960s and on into the 1970s. Initially also a bassist and bandleader, his Graham Collier Music fostered the talents of such luminaries of creative music as trumpeter Harry Beckett (1923-2010), saxophonist Stan Sulzmann, guitarists Phil Lee and Ed Speight, multi-instrumentalist Karl Jenkins, drummer John Webb and many others. A composer of long-form suites that contain a unique level of openness to the point of cross-oeuvre communication, his rhythmically incisive and tonally broad music was created "on the bandstand," even when in the studio. Collier was a composer, first and foremost, but his ideas of composition were collective and fluid, while remaining extremely rigorous. This interview was conducted via Skype for the New York City Jazz Record in advance of a speaking engagement in New York on his final published book, The Jazz Composer.
One's time on Earth is a curious thing – I hadn't expected Graham Collier to pass on so soon. By all accounts, he was happy with the article culled from this text, but there were still questions to ask that never made their way back to Graham. As this interview is published, it's a bittersweet irony that the music of Miles Davis is now being packaged as "The Miles Davis Experience" by trumpeter Ambrose Akinmusire. A far cry from the inspired impressions of Collier's Blue Suite.
As a critic who speaks with musicians a fair amount, the fluidity of terminology – "composition", "improvisation", "orchestration", "arrangement"... – is something to reckon with. It has taken years for me, as a listener-writer, to begin to understand what's on the page and what's off the page when I experience music, and even now what I think I know may be off the mark. As Collier uses these terms, it's still a challenge not to want to render them somewhat interchangeable, even if dressing up someone else's tune isn't entirely "composition." Good interviews should pose such questions, and in this case they are questions readers will have to answer through their own investigations.