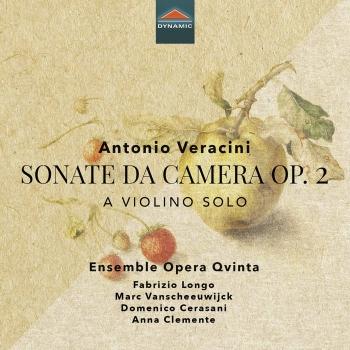 Fabrizio Longo
graduated in Literature and earned a diploma in violin with honours. He then dedicated himself to studying historic violin, its repertoire and performing challenges in Piacenza and Rome with Enrico Gatti, and at the “Accademia Filarmonica” in Bologna with Luigi Rovighi. He is the author of essays, entries, articles and critical editions of 17th- and 18th-century works for publishers such as Di Nicolò Libri, SMSP, Walhall, Ut Orpheus, Arcana, Dramaturgias, Ambronay’s, ETS, Archivio Storico Messinese and Treccani; he has recorded for SMSP, MTV, Teatro di Messina, Radio Classic, Ambronay’s, Tactus and Israel’s IBA. The winner of international competitions, he plays on original instruments or copies of museum instruments, performing both as a soloist and in ensembles dedicated to music philology. For many years now he has collaborated with the early music laboratory of the Conservatory of Bologna and with the International Museum and Music Library of Bologna. This is his third CD with Anna Clemente.
Domenico Cerasani
graduated in guitar and furthered his studies at the Hochschule für Musik und Theater of Hannover, becoming involved in the performance on original instruments and earning a second level specialization diploma with honours in lute at the “F. Vittadini” Institute of Pavia under the guidance of Massimo Lonardi. He has attended the master classes held by some of the most renowned international musicians, and earned a Master’s diploma in chamber music played on early instruments at the Musikhochschule of Trossingen in the class of Rolf Lislevand, concluding the course with the highest marks. He plays both as a soloist and in ensembles, at important festivals and events in Italy and abroad, and has recorded for La MaggioreGiottomusic, Tactus and Brilliant Classics. Having also graduated in Classical Letters at Rome’s “La Sapienza” University, alongside his artistic activity he also dedicates himself to research, and several of his articles have been published in specialized magazines. He teaches guitar and lute at the Musikschule of St. Gallen.
Marc Vanscheeuwijck
Born in Belgium, Marc Vanscheeuwijck studied musicology, art history, romance philology and pedagogy (1984), earning a PhD in musicology at the University of Gand (1995) and a diploma in cello at the Conservatory of Bruges (1986). Later, he studied baroque cello with Wouter Möller in El Escorial (Spain). After eight years of research on late 17th-century sacred music in Bologna, he published the monograph The Cappella Musicale of San Petronio under Giovanni Paolo Colonna (1674-1695), RomeBrussels, 2003. Since 1995 he has lived in the United States, where he is a full professor and holds the chair of musicology (Renaissance, Baroque and Classical periods, early music performance practice and baroque cello) at the Oregon University. He concertizes throughout Europe, the US and Canada, appearing at the most prestigious early music festivals.
Anna Clemente
obtained her diploma in piano at the age of eighteen, as well as a diploma in harpsichord, furthering her studies at Siena’s Accademia Chigiana with Kenneth Gilbert. She perfected her training under the guidance of Robert Kohnen and Andrew Lawrence King. She is an active performer in Italy and the rest of Europe, appearing at prestigious venues and participating in events, festivals and concert seasons: Estate Fiesolana, Ceresio Estate (Switzerland), Altstadt Herbst (Germany), Arsenale Musica, Theate Musica Antiqua Festival, Accademia Bartolomeo Cristofori, Festival Barocco di San Gimignano, Filarmonica Laudamo (Messina). She has collaborated on a regular basis with ensembles and musicians of renown, among them Andrea Tacchi, Pietro Bosna, Severino Gazzelloni, Howard Arman, Anthony Pay, I solisti del Maggio Musicale Fiorentino, L’Homme Armé, Modo Antiquo, Pro Cantione Antiqua and Orchestra da Camera Fiorentina, recording for Florentia Musicae, Tactus, Amadeus, Sonitus and Rai. She teaches harpsichord and historical keyboard instruments at the Conservatory of Florence.