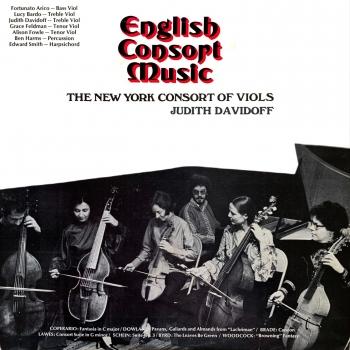 Judith Davidoff
(21 October 1927 – 19 December 2021) was an American viol player, cellist, and performer on the medieval bowed instruments. She was considered "a master of the viola da gamba and other stringed instruments" and "a central part of the early-music scene." Her recorded performances reflect her wide range of repertoire and styles, including such works as Schoenberg's Verklaerte Nacht and 13th-century monody. She is responsible for the catalog of 20th- and 21st-century viol music.
New York Consort of Viols
The New York Consort of Viols, originally part of New York Pro Musica, was incorporated in 1972 under the artistic direction of Judith Davidoff.
The groups' purpose is to bring to life the enormous repertoire of music for viols and viol consort written during the Renaissance and Baroque eras. The Consort has also commissioned new works which exploit the resources of viols in contemporary idioms.