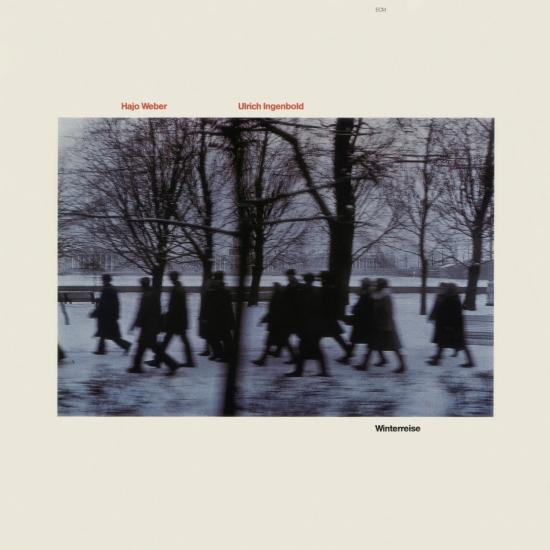 I know nothing of Hajo Weber and Ulrich Ingenbold beyond the incandescent duets these two guitarists buried in the snowy recesses of Winterreise (Winter Journey), one of ECM’s greatest forgotten treasures. The title, of course, evokes Schubert, and the comparison may not be so arbitrary, for like the famous song cycle it speaks with hushed clairvoyance. Weber and Ingenbold bring distinct flavor to this session, dividing themselves at four compositions apiece.
Weber’s are meandering. Filled with pauses and reflections, they measure the passage of time in breaths. Ingenbold gilds the wood-grained lily of “Der wundersame Weg” (The Miraculous Way) with a trembling flute. Gentle footsteps trade places with an unfamiliar cry, meditating on a horizon which, once distant, is now close enough to pluck and make music out of. “Zweifel” (Doubt) plays like its shadow, dancing through dreams as if this were the only possible means of expressing itself. The tides shift with “Drehung in der Luft” (Rotation in the Air), a floating reverie insulated from the cold, while the flamenco kiss of “Filmmusik” washes up on Aegean shores. The air is moist, glowing in the moon’s lantern light.
Ingenbold’s sound-world is more continuous, treating Weber’s backdrops as canvases for a virtuosic appliqué. His “Karussell” is the session’s masterstroke, and puts me in mind of the early cinematographs, spun into impossible animation through a gallery of slits, each the promise of an ephemeral life. The title cut teeters on a whisper. Amid a rustling of wings and tail feathers, the blade of uncertainty falls from the throat of time behind a shining veil of recollection. A child dances where children cannot be seen, but is safe beneath the snow, where spring hides from all. “Sommerregen” (Summer Rain) fulfills the promise made at the album’s outset. It is the Golden Fleece without curse, the light of better days without the pain of absence. We feel the wind on the rims of our ears, hoping for sunlight, but instead experience something far more invigorating: the song of melting ice. Ingenbold dons a flute’s clothing again in “Son’s Song.” A lullaby wrapped in dawn’s brittle skin, it wishes away evil even as Weber chases away the nightmares with his light. The music becomes flesh, the flesh becomes music, and the music becomes love.
Winterreise is a poetic diary that deserves only poetry in return, and ranks alongside Bill Connors’s Theme To The Gaurdian and Ralph Towner’s Solo Concert as one of ECM’s most evocative guitar dates. As long as a reissue seems unlikely, make this your first vinyl rediscovery.
Hajo Weber, guitar
Ulrich Ingenbold, guitars, flutes
Recorded March 1982 at Tonstudio Bauer, Ludwigsburg
Produced by Manfred Eicher
Digitally remastered 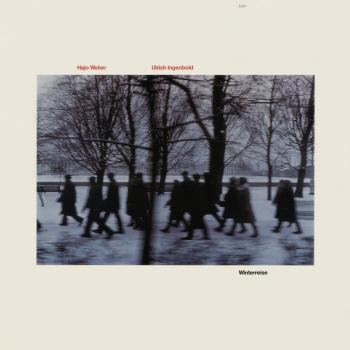