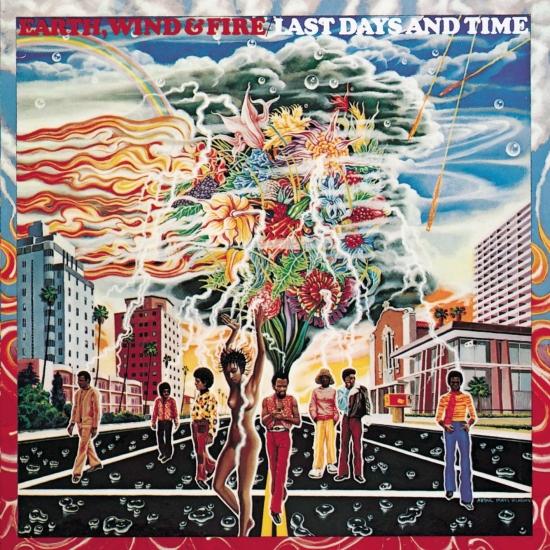 Info for Last Days and Time

Earth Wind & Fire's first album for Columbia Records – the start of a really legendary run during the 70s! The sound here is a bit tighter than their first two for Warner Brothers – a groove that has funk and soul taking a bit more precedence over the jazz of their roots – but all in a blend that's completely fresh and unique, and which takes all the righteous energy of the past, and focuses it here even more strongly! And while the groovers are great, there's also a few sweet numbers that are almost even better – some slightly mellow tracks that don't hit that commercial ballad sound of the group's later years – and which almost have an earthy, organic feel overall.
„Earth, Wind & Fire were nothing if not ambitious, and by the time of their third album they had forged an individual sound by absorbing nearly everything that had gone before them in the previous ten years. It was as if they were trying to encapsulate every eclectic foray pursued by Motown, from catchy, rhythmic pop to churning funk, and even from Stevie Wonder singing borrowed folk songs like "Blowin' in the Wind" (here, Philip Bailey did "Where Have All the Flowers Gone") to the schmaltzy, string-filled pop that spelled legitimacy to Motown. Not only that, they wanted to incorporate Sly & the Family Stone's horn-filled, gutbucket R&B and some of the fusion style of Weather Report. On Last Days and Time, they succeeded in pulling all that into their orbit, but they hadn't yet managed one crucial thing: they hadn't learned to write hits. That would come next.“ (William Ruhlmann, AMG)
Verdine White, vocals, bass, percussion
Maurice White, vocals, percussion
Philip Bailey, vocals, percussion
Jessica Cleaves, vocals
Roland Bautista, guitar
Ronnie Laws, flute, soprano & tenor saxophones
Larry Dunn, piano, organ, clavinet
Ralph Johnson, drums, percussion
Recorded April 1972 at Sunset Sound Studios, Hollywood, California
Produced by Joe Wissert
Digitally remastered