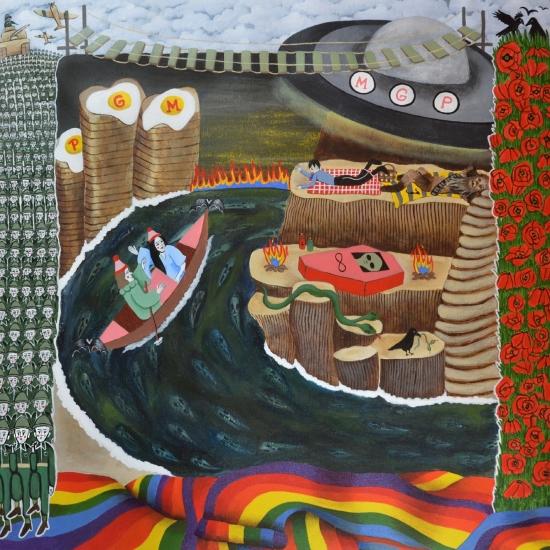 After a near 10-year hiatus, the extraordinarily talented Zach Tillman returns as Pearly Gate Music, bringing us Mainly Gestalt Pornography. Sometimes conjuring the feeling of a punk rock religious revival in an old-time prairie tent, sometimes stripped down to spare acoustic-guitar-and-lovely-croon, Tillman's music sounds as if it were written and performed by a bedraggled dust bowl poet influenced by whatever popular songs from the poor folk circuit were being sung after dinner in the parlors of his youth — and who somehow managed to supernaturally absorb the sound of Lubbock circa 1955, Laurel Canyon circa 1968 and Berlin circa 1980.
In Tillman's own words, "Mainly Gestalt Pornography is (mostly) love songs written after certain lovers, certain dread, certain visions, certain ecstasies. “I Was a Wand'rer” got written for a shamanic girlfriend. “The Secret, Finally” for a stray kitten. “Like Flowers” was written for my wife and “Ocean's Song” for my daughter. Then they all got transformed. Transformed. Shapeshifted. The Egg and the Seed. Now they're all about the same thing: Mainly Gestalt Pornography. I hope that they really do transcend their origins to speak of Love in its highest, most encompassing form. God is Love."
Pearly Gate Music aka Zach Tillman 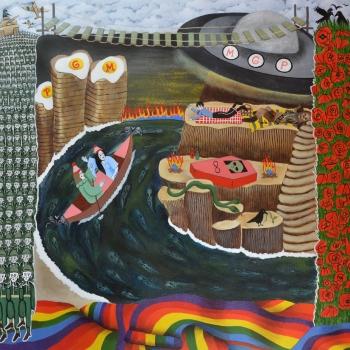 Zachary Tillman
has been seeking something all his life. What he’s looking for, and what he has found, is Mainly Gestalt Pornography.
After releasing his critically acclaimed first solo record under the moniker Pearly Gate Music in 2010 on Barsuk Records, Tillman assembled some Seattle friends to take it out on the road. The de facto band experimented with a new plugged-in sound, a total departure from his typical set of bedroom indie folk numbers.
While the record and live shows left critics and fellow songwriters hungry for more, Tillman returned with a small fan base, smaller earnings and a considerable hangover. Around that time, he moved to Portland, OR, and set to work writing and demoing a follow-up album.
Without thinking about it too much, Tillman sent those demos to a personal hero, the late indie producer and multi-instrumentalist Richard Swift. To no one’s surprise (save perhaps Tillman’s), Swift dug them very much and extended an invitation to his studio in Eugene to record the new album.
However, on the eve of his first scheduled session with Swift, Tillman suffered what he describes as a total mental breakdown. Years of substance-fueled emotional self-sabotage had caught up with him, and Tillman found himself incapable of making the short trip south to track the record.
“I had no self-esteem, no ability to see myself succeeding in even a moderate pressure situation,” Tillman explains.
His anxiety and constant second-guessing were exacerbated by the fact that his brother, Josh Tillman, was at that time seeing a serious uptick in his own professional notoriety as Father John Misty. Suppressed (though perfectly relatable) sibling rivalry compounded Tillman’s self-loathing and lost confidence, deepening his artistic and existential state of emergency.
Tillman had essentially given up on being a frontman. He chose to assume an affect of bohemian artistic “authenticity” (over, say, therapy or a healthy diet and sleep routine) and condemned himself to a lonesome near-decade, haphazardly seeking a grand purpose for his life — a search that took him from esoteric spiritual practices to hard labor, from bedrooms to bar rooms. A deep and chronic depression ensured diminishing returns, and the idea of ever releasing another Pearly Gate Music record remained a seemingly impossible dream.
“Being a musician has always been such a part of my identity, I had to keep my foot in the door somehow,” Tillman recalls. “I just needed someone to put an instrument in my hands and point me in the right direction.” So he shelved his demos and found solace hiding among the backlines of his friends’ projects, including playing in nearly every midsized club in America with his old friends in Pure Bathing Culture. He preferred the constant touring since home was an unheated trailer in a bandmate’s backyard, the Airstream of Suffering.
All the while, Tillman continued his restless search for a forgotten competence and self-love that had permitted him to start writing and recording his own music in the first place. The music of Mainly Gestalt Pornography was hiding in there somewhere, but Tillman was helpless to find it.|
That is, until he found what he’d been looking for all along: the secret, the love of this life, his wife Sondra. “She’s the culmination of all the loves I’ve ever had,” he muses, “and we’ve expanded that love even further with the birth of (our firstborn child) Ocean. Love is the answer.”
Tillman experienced a remarkable, near-instant transformation after meeting Sondra, and the pair soon decamped to Los Angeles. This happy, healing time afforded Tillman the opportunity to begin repairing long-strained relationships — with himself and his family back on the East Coast.
It was when Sondra was 36 weeks pregnant with Ocean that Tillman realized he was finally, acutely capable of finishing the record he had started so long ago. With her blessing, he rushed off to Portland to record with his close friend and longtime collaborator, Daniel Hindman (Pure Bathing Culture).
Together they feverishly co-produced and engineered the record, with Hindman helming final mixing duties and Tillman personally orchestrating and performing almost all of the instrumentation. With only seven days to track — a comical mad dash after a near 10-year hiatus — Tillman and Hindman limited the elements to a strict seven voices: vocals, guitars, bass guitar, drum set, Mellotron, Roland synthesizer and hand percussion. This limitation allowed the pair to make quick decisions and weave a compelling musical signature throughout the album’s 10 songs. Appearances from Justin Chase (Pure Bathing Culture, Tucker Martine) and Sarah Versprille (Pure Bathing Culture) round out the record’s intentional sonic palette.
In Tillman’s own words, “Across the span of 10 years, these (mostly) love songs were written after certain lovers, certain dread, certain visions, certain ecstasies. I WAS A WAND’RER got written for a shamanic girlfriend. FINALLY, THE SECRET for a stray kitten. LIKE FLOWERS was written for my wife and OCEAN’S SONG for my daughter. Then they all got transformed. Transformed. Shapeshifted. The Egg and the Seed. Now they’re all about the same thing: Mainly Gestalt Pornography. I hope that they really do transcend their origins to speak of Love in its highest, most encompassing form. God is Love.”
Mainly Gestalt Pornography, in a sense, is already a triumph for our singing poet, the realization of an episodic spiritual journey told in tracks. That this record exists stands as testament to Tillman’s struggles, a sonic history of the relational righting of the ship, and daresay, a beacon for the lost in their own troubled waters. It may not be The Secret, but it certainly is Zachary Tillman’s. – Ricky Houston