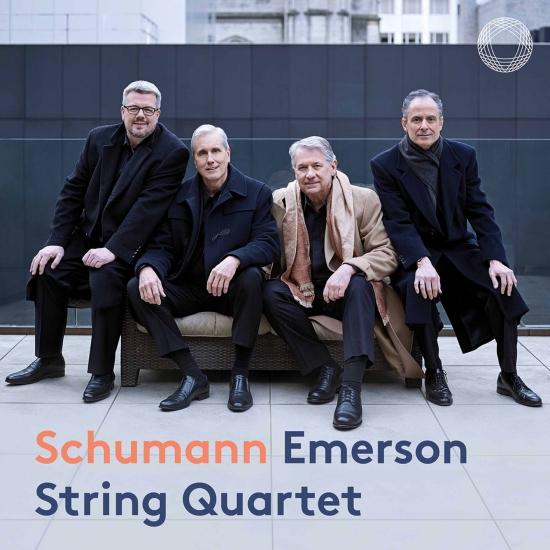 The Emerson String Quartet makes its PENTATONE debut with a recording of Schumann’s three string quartets. Penned in the summer of 1842 during an exceptional peak of creativity, these quartets formed the beginning of a six-month surge during which most of Schumann’s best chamber music saw the light. Inspired by the example of Beethoven, Schumann’s quartets display a mastery of traditional forms, combined with typically Schumannian fantasy and lyricism, particularly in the inner movements. As such, they underline a new level of maturity in Schumann’s artistic development, surpassing the fantastical aesthetic of previous years. The players of the Emerson String Quartet bring out the extraordinary freshness and originality of these works, and add another master composer’s oeuvre to their impressive discography, after having recorded the complete string quartets of Beethoven, Mendelssohn, Brahms, Bartók, Webern and Shostakovich. The artistic strength of Schumann, whose life was dominated by alternating periods of depression and manic creativity, inspires and consoles the quartet members during the uncertain times of a pandemic, and his music may equally inspire listeners. Since its founding in 1976, the Emerson String Quartet is ranked among the world’s most acclaimed chamber music ensembles.
Emerson String Quartet 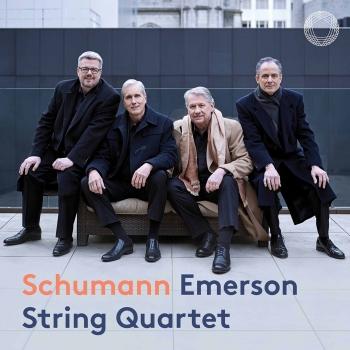 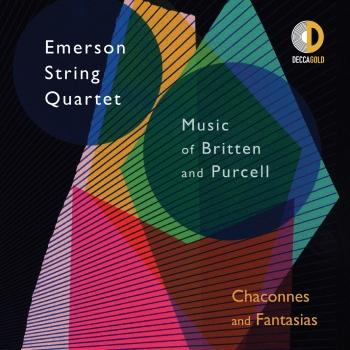 Chaconnes and Fantasias: Music of Britten and Purcell 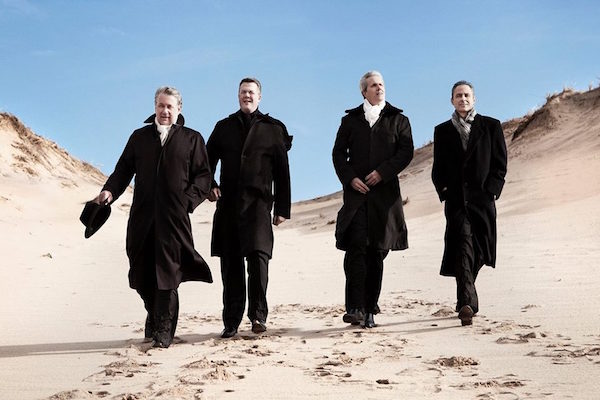 The Emerson String Quartet
has amassed an unparalleled list of achievements over four decades: more than thirty acclaimed recordings, nine Grammys® (including two for Best Classical Album), three Gramophone Awards, the Avery Fisher Prize, Musical America’s "Ensemble of the Year" and collaborations with many of the greatest artists of our time.
The arrival of Paul Watkins in 2013 has had a profound effect on the Emerson Quartet. Mr. Watkins, a distinguished soloist, award-winning conductor, and devoted chamber musician, joined the ensemble in its 37th season, and his dedication and enthusiasm have infused the Quartet with a warm, rich tone and a palpable joy in the collaborative process. The reconfigured group has been praised by critics and fans alike around the world. “The Emerson brought the requisite virtuosity to every phrase. But this music is equally demanding emotionally and intellectually, and the group’s powers of concentration and sustained intensity were at least as impressive." The New York Times
The 2016-17 season marks the Emerson Quartet’s 40th Anniversary, and highlights of this milestone year reflect all aspects of the Quartet’s venerable artistry with high-profile projects and collaborations, commissions and recordings. Universal Music Group has reissued their entire Deutsche Grammophon discography in a 52-CD boxed set. After recent engagements together at the Kennedy Center and Tanglewood, illustrious soprano Renée Fleming joins the Emerson at Walt Disney Concert Hall, performing works by Alban Berg and Egon Wellesz from their first collaborative recording, released by Decca in fall of 2015. The Chamber Music Society of Lincoln Center has programmed celebratory concerts at Alice Tully Hall, as well as in Chicago and Purchase, NY, in October: the Calidore Quartet teams up with the Emerson for the Mendelssohn Octet, and the Emerson gives the New York premiere of Mark-Anthony Turnage’s Shroud (co-commissioned by CMS). Former Emerson cellist David Finckel appears as a special guest for Schubert’s Quintet in C Major. In May 2017, international acclaimed pianist Yefim Bronfman will join the Quartet for a performance of the Brahms Quintet at Carnegie Hall. Additional highlights include a concert with clarinetist David Shifrin as part of the Quartet’s season-long residency at Chamber Music Northwest in Portland, Oregon, as well as a collaboration with cellist Clive Greensmith for the Schubert Quintet at the Soka Performing Arts Center in California. The Emerson continues its series at the Smithsonian Institution in Washington, DC for its 38th season, and the quartet members have been selected as Artistic Advisors for Wolf Trap’s Chamber Music at The Barns in Virginia, curating the series in celebration of its 20th season. On April 21, 2017 the Quartet releases its latest album, Chaconnes and Fantasias: Music of Britten and Purcell, the first release on Universal Music Classics’ new US classical record label, Decca Gold.
Multiple tours of Europe comprise dates in Austria, Italy, Germany, Switzerland, Belgium, The Netherlands, Spain and the United Kingdom (including Wigmore Hall for a 40th Anniversary Gala); the Quartet also tours South America and Asia.
Formed in 1976 and based in New York City, the Emerson was one of the first quartets whose violinists alternated in the first chair position. The Emerson Quartet, which took its name from the American poet and philosopher Ralph Waldo Emerson, is Quartet-in-Residence at Stony Brook University. During the spring of 2016, full-time Stony Brook faculty members Philip Setzer and Lawrence Dutton received the honor of Distinguished Professor, and part-time faculty members Eugene Drucker and Paul Watkins were awarded the title of Honorary Distinguished Professor. In January 2015, the Quartet received the Richard J. Bogomolny National Service Award, Chamber Music America’s highest honor, in recognition of its significant and lasting contribution to the chamber music field.