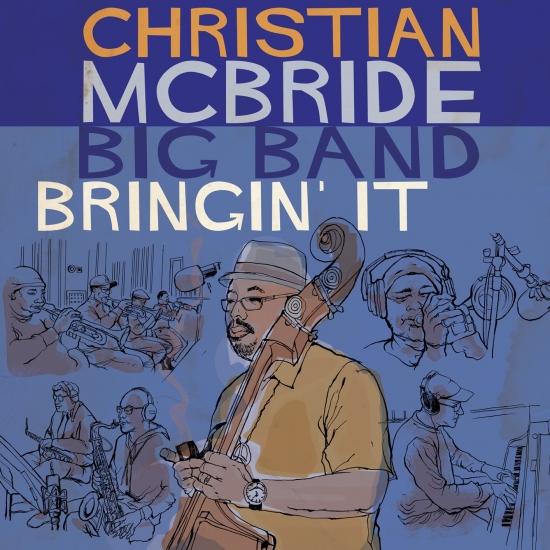 Info for Bringin' It

Bringin’ It, the highly anticipated release which follows the Christian McBride Big Band’s 2011 GRAMMY® Award-winning debut, The Good Feeling, puts his status and skills as an all-around entertainer on full display.
If it is true that jazz is a sponge for musicians to absorb and then squeeze out what they hear to produce their own sound, McBride has been “bringin’ it” for quite a long time. From his amazing quintet, Inside Straight; to his avant-garde leaning quartet, New Jawn; the contemporary sound of his fusion group, A Christian McBride Situation; to the critically acclaimed music he’s made with his trio, the bassist has always disseminated his own unique 360-degree view of jazz.
"Christian McBride's second big-band album, 2017's Bringin' It, is a robust, swaggeringly performed set of originals and standards showcasing his deft arranging skills and his ensemble's exuberant virtuosity. The album comes six years after his previous big-band outing, The Good Feeling, and once again finds the bassist conscripting a slew of his talented cohorts (some new, others returning), including saxophonists Steve Wilson and Ron Blake, trumpeters Freddie Hendrix and Brandon Lee, trombonist Steve Davis, pianist Xavier Davis, drummer Quincy Phillips, and others. Together, they make a swinging, dynamic sound that brings to mind the Thad Jones/Mel Lewis Orchestra of the 1960s and bassist Charles Mingus' various big-band recordings. It should be noted that both of those ensembles continue to live on as the Vanguard Jazz Orchestra and Mingus Big Band, and McBride's group matches their high artistic legacies. This is partly due to his own virtuosic skill and anchoring presence throughout all of Bringin' It, and is true whether he is laying down a thick, groove-based funk pattern, as on the opening "Gettin' to It," or providing the steady footing for saxophonist Wilson's guttural, bluesy introduction on "Used 'Ta Could." That said, while he certainly takes his share of solos on Bringin' It, McBride's focus as an arranger is clearly trained on providing his bandmates with a solid framework for their own improvisational talents. Fat-toned trumpeter Freddie Hendrix is particularly showcased, launching skyward out of blast of brassy fire on "Gettin' to It" and skillfully surfing the band's angular harmonic waves on Freddie Hubbard's "Thermo." Similarly, pianist Davis emerges from the band's theatrical skronks and ersatz animal noises on McCoy Tyner's "Sahara" with a titanic roil of thickly chorded notes like a ship on a boiling sea. Elsewhere, McBride reveals his more urbane inclinations, showcasing vocalist Melissa Walker on the sparkling bossa nova number "Upside Down" and his sprightly take on Jerry Jeff Walker's "Mr. Bojangles," while "I Thought About You" and "In the Wee Small Hours of the Morning" are both sweeping, gorgeously arranged ballads. With Bringin' It, McBride has ultimately crafted a big-band album that retains all of his own formidable, exuberant characteristics." (Matt Collar, AMG)
Christian McBride, bass
Steve Wilson, alto saxophone, soprano saxophone, flute
Todd Bashore, alto saxophone, flute, piccolo
Ron Blake, tenor saxophone, flute
Dan Pratt, tenor saxophone, flute
Carl Maraghi, baritone saxophone, bass clarinet
Frank Greene, trumpet
Freddie Hendrix, trumpet
Brandon Lee, trumpet
Nabate Isles, trumpet
Steve Davis, trombone
Michael Dease, trombone
Joe McDonough, trombone
James Burton, trombone
Douglas Purviance, bass trombone
Xavier Davis, piano
Quincy Phillips, drums
Rodney Jones, guitar
Melissa Walker, vocals
Brandee Younger, harp 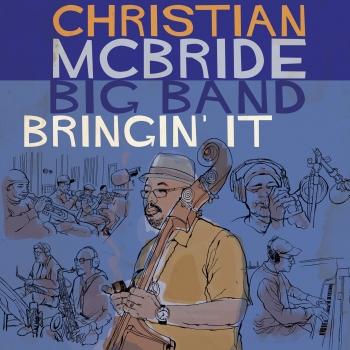