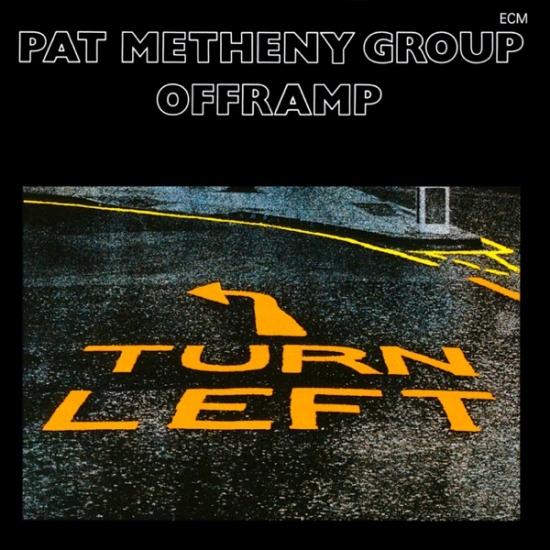 "Offramp" is the third album by the Pat Metheny Group, released in 1982. It won the Grammy Award for Best Jazz Fusion Performance. It contains the popular ballad "Are You Going with Me?".
Offramp is the first studio album on which Metheny used a guitar synthesizer, a Roland GR-300 controlled with a Roland G-303 guitar synthesiser controller. The guitar synthesizer became one of Metheny's most frequently used instruments.
Offramp is also the first Group album to feature vocals, which became a fundamental component of the band's sound. When Metheny and Lyle Mays partnered with Brazilian percussionist Naná Vasconcelos on the album As Falls Wichita, So Falls Wichita Falls, they sought to expand the potential of the recording studio as an ensemble instrument and experiment with sounds they hadn't previously utilized. Some of the innovations introduced on Wichita carried over into Offramp, namely Vasconcelos's vocals and percussion stylings.
Bassist Mark Egan was replaced by Steve Rodby, who remained with the Group well into the 2000s and became an important partner in the compositional and production processes between Metheny and Mays.
The Group pays tribute to one of Metheny's biggest influences, pioneering free jazz instrumentalist Ornette Coleman, on the title track, and singer-songwriter James Taylor served as the inspiration for the sixth track, "James."
When I was a freshman in high school, our science teacher brought us outside one day to observe a partial solar eclipse. Though he had set up a telescope, provided us with special glasses, and prepared a lecture, my eyes were glued to the ground. As anyone who has experienced a solar eclipse knows, the sun’s light pocks the shadows like Swiss cheese, splashing the earth with countless little crescents of a half-eaten sun.
Every note of Pat Metheny’s heavenly soloing on Offramp is its own crescent. His is a talent spun from sunlight, and one that might damage the eyes were its full force to be unleashed at once. Thankfully, we need no special equipment but our own ears to appreciate the intensities he brings to this immortal PMG date, which after the global reach of As Falls Wichita… expanded the compositional and technical prowess of Metheny and keyboardist Lyle Mays to deeper, more serpentine caverns of experimentation.
The Synclavier-enhanced calls of “Barcarole” are the album’s birth cries, each a punctilious footstep into the greater semantic complexities of “Are You Going With Me?” This smooth ride through sun-kissed plains drips with the tears of an unrecoverable past, Metheny’s guitar bellowing like a human trumpet keening at the speed of travel. “Eighteen” inoculates the proceedings with the livewire exuberance in which these musicians so deeply excel. Metheny is light on his feet and infinitely careful about his twists and turns, infusing each with that unmistakable audible grin. Dan Gottlieb kicks up a dust storm in the title song, which also features Metheny in one of his wildest excursions yet. Fractured pianism, an explosive glockenspiel, and Steve Rodby’s fantastic ground lines paint just the right ambiance to allow Metheny to uncork a bottle of some unrepeatable tincture that he seems to have been saving for this very occasion. After this flip and a half, “James” comes across as an acrobatics of its own kind, gracing our cochlea with heartwarming electricity, leaving the wispy skies of “The Bat Part 2” as our only postcard.
Yet all of the above combined barely tickles the underbelly of “Au Lait,” which still stands as Metheny’s most perfect statement. Though something of a carnivalesque on the surface, complete with rolling snare and haunting vocals courtesy of Vasconcelos, one also feels sung to of something far more serious. Whatever that might be, we experience it in real time, every wordless call a way station to where it all began. Metheny is as transcendent as he will ever be, each swing more harmonic than the last over the Joe Hisaishi-like touches from Mays. Oracular and airborne, this is a space we never wish to leave. And on the inside, it never does.
Metheny is a skillful writer who, with heart in place of pen, takes a kernel of an idea and draws every imaginable root before starting in on the leaves. Like a solar eclipse, such music comes all too rarely in any given generation. The beauty of Offramp is that it always feels like the first time. Is your turn signal on yet?
Pat Metheny, guitar, guitar synthesizer
Lyle Mays, keyboards
Steve Rodby, basses
Nana Vasconcelos, percussion, berimbau, voice
Dan Gottlieb, drums
Recorded October 1981 at Power Station, New York
Engineers: Jan Erik Kongshaug and Gragg Lunsford
Produced by Manfred Eicher
Digitally remastered by Christoph Stickel