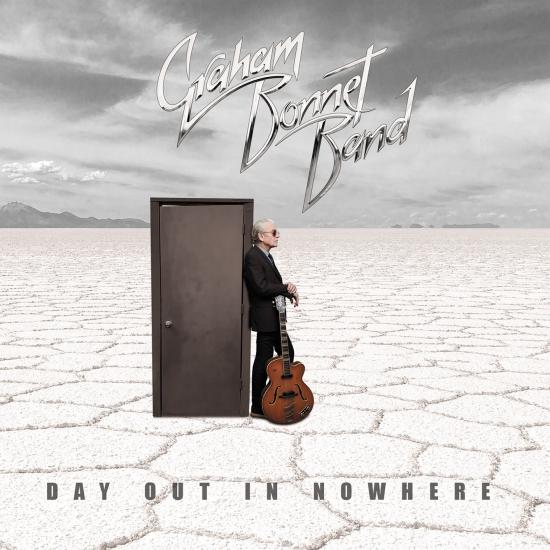 Info for Day out in Nowhere

The Graham Bonnet Band has announced the upcoming release of a new studio album, "Day Out In Nowhere" on May 13, 2022. Graham is joined by long-time bandmates Beth-Ami Heavenstone (bass) and Conrado Pesinato (guitar) on this new opus, as well as keyboardist Alessandro Bertoni and drummer Shane Gaalaas (Michael Schenker, B’z). "Day Out In Nowhere" also sees guest appearances from Jeff Loomis (Arch Enemy, Nevermore), John Tempesta (The Cult, White Zombie), Mike Tempesta (Powerman 5000), Roy Z (Halford, Bruce Dickinson), and Graham's former bandmate, legendary keyboardist Don Airey (Deep Purple, Rainbow).
Explains Bonnet of the new album, “Similar to the first two albums, it will reflect different eras of my career, but with a contemporary twist. I’m also delighted to be playing with original members of the Graham Bonnet Band, Beth-Ami Heavenstone who has been my constant partner (on and off stage) since meeting back in 2012 and guitarist Conrado Pesinato, who’s innate musical style elicits some of my best songwriting.” Conrado and Beth-Ami also serve as the album’s producers.
Graham Bonnet is a hard rock legend with a pedigree to back that statement up. His stints with Rainbow, MSG, Alcatrazz, and Impellitteri prove he is one of the finest rock vocalists of his generation. In his late 60s into his 70s, Graham has made fully three of the best albums he’s ever done, namely a reunion album with Alcatrazz called "Born Innocent" in 2020, along with two regal, rocking and yet irresistibly sophisticated records with his cherished Graham Bonnet Band, "The Book", which arrived in 2016 and was followed by "Meanwhile, Back in the Garage" in 2018. Both of these albums represent more accurately the vision Graham had for a reunited Alcatrazz, so to speak, with less emphasis on guitar pyrotechnics and more on quality song construction, all topped with lyrics that force us to consider the world around us, both the good and the bad, with Graham addressing a myriad of themes few others in his position care to address.
It is with this elegant late-career outfit, The Graham Bonnet Band, that this consummate powerhouse of a vocalist and charmer of a front man will be focusing moving forward. With "Day Out In Nowhere" set to be released through Frontiers, expect Graham to hit the tour trail (conditions permitting), proving that his recent command of the stage through Michael Schenker reunion shows the world over was in no way some sort of lucky streak but an unexpected late-period burst of energy.
"Day Out In Nowhere" will be the Graham Bonnet Band's third release with Frontiers Music Srl, following the well-received and critically praised "The Book" and "Meanwhile, Back In The Garage".
Graham Bonnet, vocals
Conrado Pesinato, guitars
Beth-Ami Heavenstone, bass
Guest musicians:
Alessandro Bertoni, keyboards
Jeff Loomis, guitars
Takanori Ozaki, acoustic guitar
Levi Dokus, drums
Shane Gaalaas, drums
Kyle Hughes, drums
John Tempesta, drums
Mike Tempesta, guitars
Roy Z, guitars 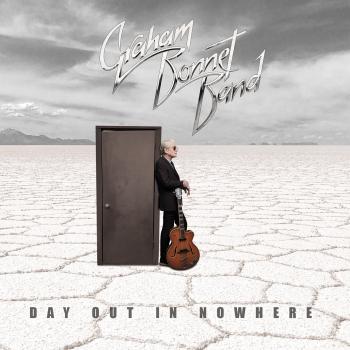 Day out in Nowhere 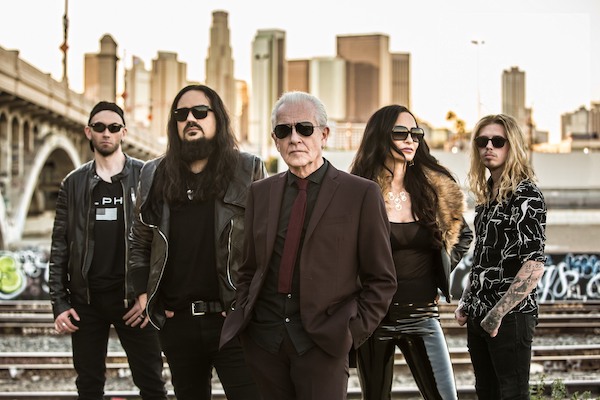 Graham Bonnet
Born in Skegness, England (December 1947), Bonnet enjoyed his first chart success with The Marbles, his first single with them – ‘Only One Woman’, penned by the Bee Gees – becoming a top 5 UK hit in 1968. After a spell recording advertising jingles, he appeared in the 1974 British comedy film ‘Three for All’ as lead singer of a fictional band called Billy Beethoven, receiving a rave review for his performance! Bonnet’s subsequent career has seen him work with some of the best musicians in the business, including guitar virtuosos Ritchie Blackmore Michael Schenker, Yngwie Malmsteen, Steve Vai and Chris Impellitteri... drummers Cozy Powell and Ted McKenna, bassists Roger Glover and Chris Glen and keyboard player Don Airey.
He is well known as the voice on a number of classic heavy rock albums including Rainbow’s ‘Down to Earth’ (1979), Michael Schenker Group’s ‘Assault Attack’ (1982), Alcatrazz’s ‘No Parole for Rock ‘n’ Roll’ (1983) and ‘Disturbing the Peace’ (1985).
Rainbow’s ‘Down to Earth’ spawned two hit singles, a cover of Russ Ballard’s ‘Since You’ve Been Gone’ and ‘All Night Long’. During his time with Rainbow, Bonnet also headlined the inaugural Monsters of Rock Festival at Castle Donington in the UK. Singles from the first two studio Alcatrazz albums, ‘Island in the Sun’ (from ‘No Parole …’ and ‘God Blessed Video’ (from ‘Disturbing the Peace’), became staples of MTV, then in its infancy.
Bonnet has maintained an active solo presence throughout most of his career, releasing albums periodically including the eponymous ‘Graham Bonnet’ (1977), which was a hit in Australia, ‘No Bad Habits’ (1978), ‘Line-Up’ (1981), ‘Here Comes the Night’ (1991), ‘Underground’ (1997) and ‘The Day I Went Mad’ (1999). The single ‘Night Games’ (from the ‘Line Up’ album) reached number 6 in the UK charts.
He has recorded and toured with a wide-range of other artists and released albums with bands such as Impellitteri, Forcefield, Blackthorne and Japanese legends Anthem.
Bonnet has a powerful and distinctive vocal style and, indeed, a distinctive image – preferring to let the music, rather than the conventional heavy metal look, do the talking.