Treasure of Love The Flatlanders 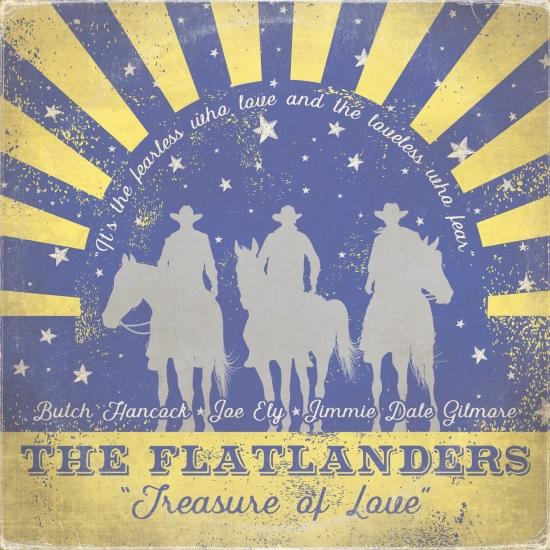 Info for Treasure of Love

“We’ve all been fans of each other from the start,” says Jimmie Dale Gilmore, “but the thing that’s always struck me about The Flatlanders is that, first and foremost, it’s a band rooted in friendship. Beyond the music, we just connect with each other in these deep and personal ways, and that’s been a lifelong treasure.”
Take a listen to Treasure of Love, The Flatlanders’ first new album in more than a decade, and it’s clear that those bonds are deeper and stronger now than ever before. Completed during COVID-19 lockdowns with the help of longtime friend and collaborator Lloyd Maines, the record finds the iconic Texas trio of Joe Ely, Jimmie Dale Gilmore, and Butch Hancock in classic form, serving up a rollicking collection of twang-fueled, harmony-laden performances full of wry humor and raw heartbreak. While a few of the songs here are never-before-heard originals, the vast majority of the tracklist consists of vintage tunes the band picked up during their 50-year career, some stretching as far back as the group’s earliest performances in the honkytonks around Lubbock, TX, where you might have spotted Willie Nelson or Townes Van Zandt in the audience on any given night. These days, you may be more likely to find avowed fans like the Coen Brothers or David Byrne in the crowd, but the spirit of The Flatlanders remains the same: everything’s better with friends.
“Whenever the three of us get together, it all feels so fresh and exciting and unpredictable,” says Hancock. “Every time we collaborate, there’s this feeling of newness and possibility, even though it’s all a part of this same story we’ve been telling since the very beginning.”
The Flatlanders 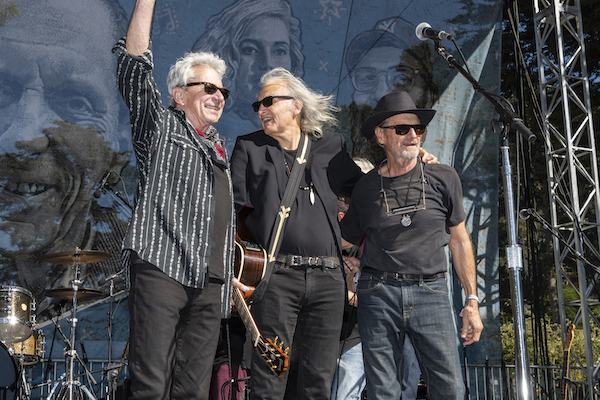 The Flatlanders
Joe Ely, Jimmie Dale Gilmore and Butch Hancock -- add a bit of Texas twang to a 50-plus-year-old Bob Dylan song with their cover of "She Belongs to Me." The brand-new recording is premiering exclusively via The Boot; press play below to listen.
Dylan originally released "She Belongs to Me" in 1965, on his Bringing It All Back Home album, though it's since been covered by everyone from the Flying Burrito Brothers to Tna Turner. The Flatlanders' rendition is a bit jauntier than the original; Ely praises Gilmore's delivery of the lyrics for their "mystical universal appeal."
"I loved this song the first time I heard it and have never grown tired of it. Although it is written from the male perspective, it touches upon the plight of a strong woman living in (what is still) a man’s world," Gilmore reflects. "Dylan was prescient in his understanding of so many of the dilemmas that have now become almost common knowledge. Butch, Joe and I have shared an appreciation of Dylan’s artistry and wit from the beginning, and after performing this for so many years, I am happy to finally have a recorded version of it on a Flatlanders release."
Adds Hancock, "Jimmie's voice and this song still echo the miles and smiles the Flatlanders have shared."
Listen to the Flatlanders' "She Belongs to Me":
"She Belongs to Me" appears on Treasure of Love, the Flatlanders' forthcoming new album, their first in more than a decade. The trio recorded the bones of project's 15 songs at Ely's own Spur Studios, located in Austin, Texas, before the COVID-19 pandemic, then enlisted legendary musician Lloyd Maines to help them finish the record, which Maines co-produced with Ely and his wife Sharon.
Treasure of Love combines select unreleased originals with favorites from throughout the Flatlanders years together -- Townes Van Zandt's "Snowin' on Raton" and "She Smiles Like a River" by Leon Russell, for example -- which stretch back to the early 1970s. Their most recent album is 2009's Hills & Valleys, though The Odessa Tapes, which features unreleased recordings from the trio's earliest sessions, arrived in 2012.
"The thing that's always struck me about the Flatlanders is that, first and foremost, it's a band rooted in friendship," says Gilmore. "Whenever the three of us get together, it all feels so fresh and exciting and unpredictable."
Between disbanding in 1973 and reuniting after the 1990 reissue of their original recordings, the Flatlanders each cultivated successful solo careers, which continue today. That success, Gilmore reasons, is what's kept them together as a trio.
"We're all such strange individualists," he says, "but we can co-captain this ship together because every time we come back to it, we feel that same magic we felt when we first started playing together."