The Finnish hard rock/melodic heavy metal band Lordi was originally formed in 1992 by the band's lead singer, songwriter, visual artist and costume maker, Mr Lordi. Lordi took part in the Eurovision song contest and won the whole competition as the first and only winner from Finland, with all-time record-breaking points at the time. The third album The Arockalypse was released within the same time frame, with the band´s own idols Udo Dirkschneider (Accept, U.D.O.), Bruce Kulick (ex-KISS), Dee Snider and Jay Jay French (Twisted Sister) appearing as guest stars. The success of the victorious single "Hard Rock Hallelujah" launched Lordi to new heights of media exposure, fan recognition and success, that opened new doors for the band. The band has been touring actively since 2002 and it´s known for the monstrous look and the horror elements in the stage performance and music videos.
"Everything Sexorcism has to offer is exactly what a seasoned Lordi fan has come to expect from the Finnish monsters – loud, brash, risqué and really catchy music. Love or hate them, there is one undeniable fact; the guys know how to draw attention to themselves. With this release; however, whilst the haunting, dark lyrics of previous albums remains, the lyrical topics delve far deeper into innuendo than before and there’s concern that it will throw all hard work out of the window with its sexually-deviant subject matter." (Niki Flynn, puregrainaudio.com)
Lordi 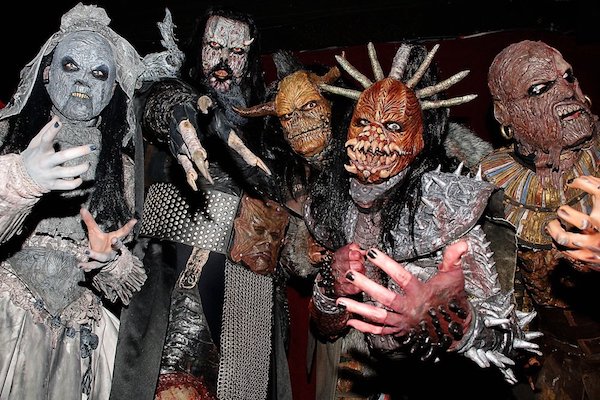 Lordi
We all have our dreams, even the most world-weary of us. Some of these dreams are clearly materialistic, some possess commendable spiritual values. Some are more unrealistic than others. The one thing they all have in common is that we cherish them and they are our driving force. This goes just as well for the fragile dreams we keep close to our hearts as the L-O-U-D loud ones we want all the world to know about. The ones like the Monsterican Dream.
For over ten years he had been tinkering with his very own Frankenstein's monster. His early heroes like the Incredible Hulk, Count Dracula and the characters of the Muppet Show stuck with him as he graduated from a kid experimenting with his mother's make-up and shooting horrorfilms on video with his friends, to a true master of his art. His real name isn't important to us. Neither is the fact that he was born and bred in Rovaniemi, a Finnish city located at the Arctic Circle where people spend their days in complete darkness for months on end during wintertime. The world he has created is a whole lot darker still. And he is Lordi now, the embodiment of all nightmares past and present. A boy who turned into a monster without ever having to suffer from dull adulthood.
But no one likes to be alone, not even the self-appointed 'Freddie Kruger of rock'n'roll'. Lordi began to carefully assemble his dream team of kindred spirits. When he finally found them it didn't come as a big surprise that each and every one of them was a seasoned veteran of the KISS Army. More importantly though, they all were more than willing to leave their former selves behind and turn into archetypical monsters. Enter Amen the unstoppable mummy, Enary the manipulative Valkyrie, Kalma the biker-zombie from hell, and Kita the alien manbeast with the combined strengths of all the beasts known to man. Led by Lordi, this true last gang in town armed themselves with guitars and killer songs. And then there was sound!
Like the ultimate nerd's revenge, this unruly pack swaggers ten feet tall through a Haunted Town full of Fires in the Hole, a place on the verge of Kalmageddon. The Children of the Night and some Forsaken Fashion Dolls, careful not to Wake the Snake, are being haunted by Pet the Destroyer and the Blood Red Sandman. And even though Lordi declares that My Heaven Is Your Hell this heaven/hell is also a state of mind that gives you the freedom to raise your fist, sing along and dance the night away in any old style you fancy! Once you wake up from the Monsterican Dream you'll know at least one thing. Monsters have more fun. (And, hey, the girls don't tend to fall for the good guys, now do they?)
The music on "The Monsterican Dream" has been created pretty much as a group effort in which the band was being expertly aided by producer Hiili Hiilesmaa (HIM, Amorphis, Sentenced). Hiilesmaa was the perfect choice for the job as he has become widely known as the Mad Scientist, in addition to being a true connoisseur of all matters metal. Together the monsters and the scientist came up with a collection of twelve high-octane anthems of the netherworld: big, loud, hook-filled songs that dare to be hilariously dumb when needed. Songs designed to raise the dead.
The lyrics, or should we rather say horror stories, have been masterminded by Lordi himself. The limited edition version of the album also contains a 13th horror story in which the gang drop their instruments and turn for 31 glorious/gory minutes into character actors. "Lordi's The Kin" is a surrealistic horror movie directed by Lauri Haukkamaa, and while it's not necessarily suitable for your kids to view, your inner child might enjoy it.
The ultimate way to experience the Monsterican Dream is of course by catching Lordi in live action. Their act goes unashamedly over the top, combining the theatrics of Alice Cooper with a pyro-filled rock'n'roll show. In other words: good clean fun for everyone and not a subtle moment in sight!
"Create the band that you would like to see on stage. Write the songs you'd love to sing along to. That's pretty much all that we did."
A Monsterican Dream come true. Or a nightmare come to life.
"The Monsterican Dream" is Lordi's second album. Their debut "Get Heavy" was released in 2002 and has reached platinum status in their native Finland. It's lead single "Would You Love a Monsterman" spent an impressive four months in the charts, reclaiming the top spot on several separate occasions. Drakkar Records (www.drakkar.de) has released "Get Heavy" in Germany and will release "The Monsterican Dream" there on June 1st.
Lordi appeared live at last year's Wacken Open Air Festival (www.wacken-open-air.com), including shows in Germany, Austria and Switzerland as part of the Wacken Road Show. Source: Drakkar's homepage [www.drakkar.de]