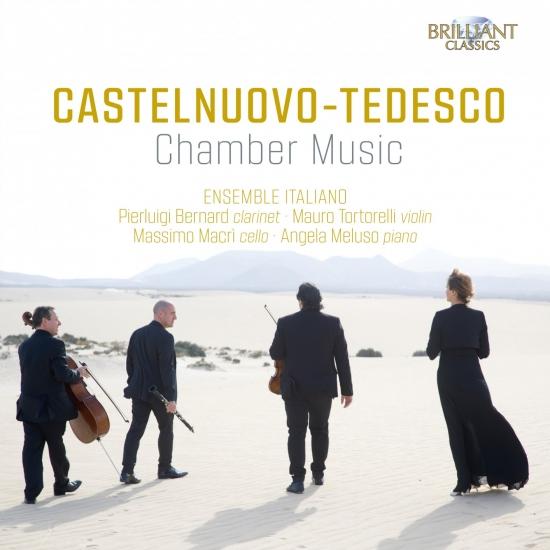 Chamber music of Mediterranean lyricism and Latin harmonies, including a world-premiere recording.
Not least thanks to a growing catalogue of albums on Brilliant Classics, the multi-faceted work of Mario Castelnuovo-Tedesco (1895-1970) is experiencing a renaissance. The guitar music he wrote for Segovia has until recently overshadowed the vocal and chamber pieces which speak with the composer’s own voice, that of an Italian lyricist at heart whose intimate acquaintance with world literature and the whole history of music – he was fluent in at least six languages – lend cosmopolitan charm and a lightness of touch to a style encapsulated by ‘20th-century Impressionism’.
Both the Cello Sonata Op.50 (1928) and the Second Piano Trio (1932) date from Castelnuovo-Tedesco’s early maturity in Italy, when he was known as a musical man of parts, equally adept as a performer, a composer and a writer on music. The two-movement form of the Cello Sonata is unusual but successful, capitalising on the solo instrument’s propensity for long cantabile lines with a spaciously unfolding opening arioso, followed in Beethovenian fashion with an ‘arietta con variazioni’ that does indeed evoke a mood of 18th-century elegance. The G minor Piano Trio, as befits its key signature, is a much more turbulent work, even in its central Romance with variations.
Castelnuovo-Tedesco composed his Clarinet Sonata towards the end of the Second World War, having emigrated to the US in 1938, in flight from Mussolini’s persecution of the Jews. He appears not to have had a particular performer in mind, though the clarinet was enjoying new-found status as a solo instrument due to Benny Goodman’s commissioning of pieces from the likes of Copland and Milhaud, and his colleague on the composing staff at MGM Studios, Nathaniel Shillkret, was also a fine clarinettist. The Sonata’s Classical four-movement structure is infused with Romantic melody, shimmering piano textures and jazz-inflected harmonies.
Having been composed in 1958 but only published in 2017, the Pastorale and Rondo Op.185 is only now receiving its first recording. Castelnuovo-Tedesco scored it for the same combination of clarinet, violin, cello and piano as Messiaen’s Quartet for the End of Time, and this recording reveals the piece as a fine, contrasting complement to that masterpiece, cast in a single 15-minute movement.
Ensemble Italiano brings together four internationally acclaimed and experienced musicians: Mauro Tortorelli (violin) and Angela Meluso (piano), who previously made up Gran Duo Italiano; Massimo Macrì (first cello of the RAI National Orchestra in Turin); and Pierluigi Bernard (first clarinet of the Tenerife Symphony Orchestra).
Mario Castelnuovo-Tedesco was one of the most successful and remarkable composers of the first half of the 20th century in Italy. His style is influenced by Neo-Classicism, vivid, brilliant, with the occasional odd dissonance, strongly rhythmical and full of catchy melodies. He fled Anti-semitism before WWO2, and settled in Hollywood where he successfully composed film music for more than 200 films.
This new recording presents a selection of chamber music for clarinet, violin, cello and piano, in various combinations: the most substantial is the Piano Trio Op. 70, also featured are the Clarinet Sonata, the Cello Sonata Op. 50 and Pastorale and Rondo, Op. 185 for all 4 instruments. Evocative, dream-like and melancholy music alternates with exciting, rhythmically driven dances.
Played with feeling and conviction by the Ensemble Italiano, with Mauro Tortorelli (violin) Pierluigi Bernard (clarinet), Massimo Macrì (cello) and Angela Meluso (piano).
This ensemble previously issued a recording of Castelnuovo-Tedesco with the complete works for violin and piano (BC 95642).
Ensemble Italiano:
Mauro Tortorelli, violin
Massimo Macrì, cello
Pierluigi Bernard, clarinet
Angela Meluso, piano 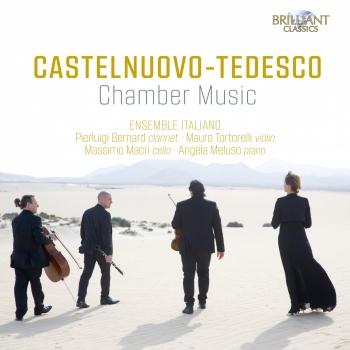