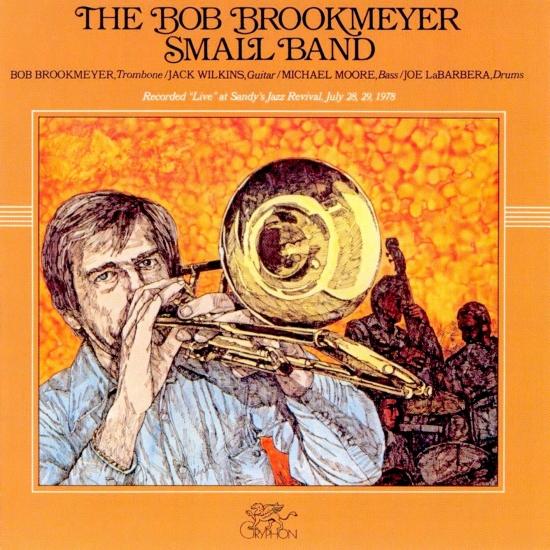 This double-album is an excellent showcase for Bob Brookmeyer's valve trombone playing. Joined by the complementary guitarist Jack Wilkins, bassist Michael Moore and drummer Joe LaBarbera, Brookmeyer stretches out on ten standards, two songs by Andy Laverne, the obscure "Passages" plus a pair of his own songs. The two-fer is one of the best examples of Brookmeyer's playing since his permanent return from semi-retirement earlier in 1978. (Scott Yanow, AMG)
The group here - Jack Wilkins, Michael Moore, and Joe LaBarbera - is "the first group I've had as a leader that I'm serious about," Bob says. "In the past, I'd think of a group in terms of a week or a month. My whole life then was sort of disposable. Night clubs were disposable, bands were disposable. But now, I've taken over my life and I have a group that I can stand up and be proud of. It's not something I feel I'll be through with after a gig and then go on to something else. This band has an intent to live."
Already, as you can hear, it is a band that sounds as if it's been together for months, even years, so quickly attentive as well as inventive are all its parts Jack Wilkins, in my view, is the most imaginative guitarist to have emerged since Jim Hall. He's been with Stan Getz and Dizzy Gillespie, among others, but I first heard him with Buddy Rich. In a welcome solo spot after the magnified machine-gun sound of that big band, Wilkins practically hypnotized the whole room with a ballad that kept changing shapes and colors as if it were enchanted. Then later in the same set, he swung hard enough to carry the whole band.
"Jack is a musician," says Brookmeyer, "who has all the tols to do anything he wants. And he can sound any number of different ways." Mike Moore has the same high and continually climbing reputation among musicians as does Wilkins. His credits include stretches with Woody Herman, Marian McPartland, Freddie Hubbard, the Ruby Braff-George Barnes quartet, Maria Muldaur, and Benny Goodman.
Bob Brookmeyer, trombone
Jack Wilkins, guitar
Michael Moore, bass
Joe Labarbiera, drums
Recorded "Live" July 28-29 1978 at Sandy's Jazz Revival
Digitally remastered 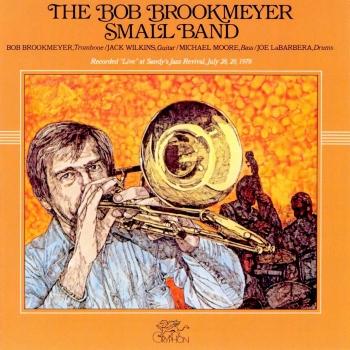 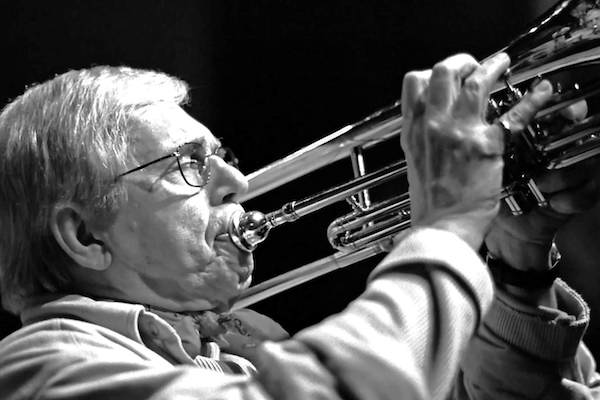 Bob Brookmeyer
was long considered one of the top valve trombonists in jazz and a very advanced arranger whose writing was influenced by modern classical music. He started out as a pianist in dance bands but played valve trombone with Stan Getz (1953). He gained fame as a member of the Gerry Mulligan quartet (1954-1957), was part of the unusual Jimmy Giuffre Three of 1957-1958 (which consisted of Giuffre's reeds, Brookmeyer's valve trombone, and Jim Hall's guitar), and then re-joined Mulligan as arranger and occasional player with his Concert Jazz Band. Brookmeyer, who was a strong enough pianist to hold his own on a two-piano date with Bill Evans, occasionally switched to piano with Mulligan. He co-led a part-time quintet with Clark Terry (1961-1966), was an original member of the Thad Jones/Mel Lewis orchestra (1965-1967), and became a busy studio musician. Brookmeyer was fairly inactive during much of the '70s, but made a comeback in the late '70s with some very advanced arrangements for the Mel Lewis band (of which he became musical director for a time). Brookmeyer moved to Europe, where he continually wrote and occasionally recorded on his distinctive valve trombone, issuing Old Friends in 1998. New Works Celebration appeared a year later, and in 2000 he issued Together. Brookmeyer continued to perform and release albums through the next decade, often working with his European big band The New Art Orchestra including 2002's Waltzing with Zoe, 2004's Get Well Soon, and 2007's Spirit Music. In 2008, he explored his deep interest in classical music with Music for String Quartet and Orchestra. He wrote innovative big-band compositions and was highly regarded as a teacher: his classes at the New England Conservatory of Music are the stuff of legend. On December 15, 2011, Brookmeyer died in his sleep at a hospital near his home in Grantham, New Hampshire; the cause was congestive heart failure. He passed just a month after releasing the album Standards via the ArtistShare website, and only three days shy of his 82nd birthday. (Scott Yanow, AMG)