There's Something on Your Mind: The Greatest Hits (Remastered) Bobby Marchan 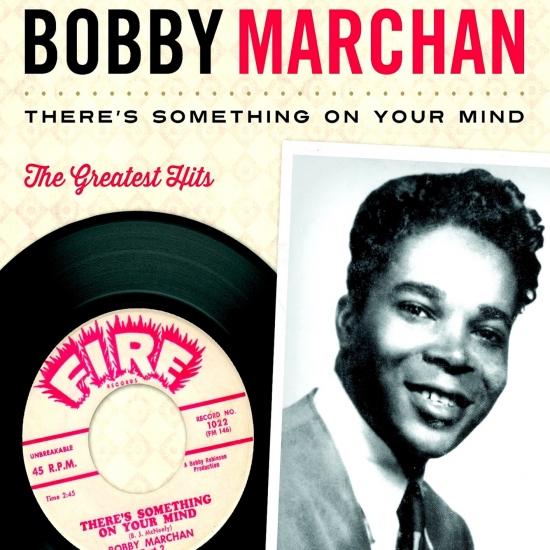 Info for There's Something on Your Mind: The Greatest Hits (Remastered)

This is the only authorized collection of Marchan's best recordings on the Fire label. 18 tracks remastered from the original tapes. With original album cover artwork and liner notes by Bill Dahl. He is a larger-than-life performer best remembered for his 1960 R&B chart-topper 'There Is Something on Your Mind.'
As a child he became fascinated by the female impersonators who appeared on the so-called chitlin circuit of black nightclubs, and began singing and performing comedy in drag while in his teens. In 1957 he joined Huey 'Piano' Smith as the original lead vocalist with Smith's legendary band the Clowns.
Bobby Marchan, vocals
Digitally remastered 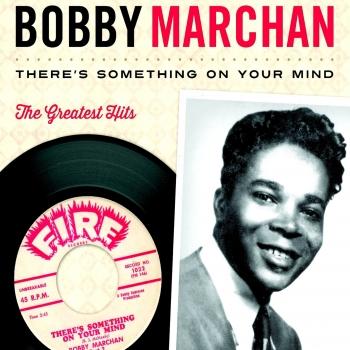 There's Something on Your Mind: The Greatest Hits (Remastered)

Bobby Marchan
One of New Orleans' most colorful rhythm and blues artists, died Dec. 5, 1999 after a lengthy illness. Mr. Marchan, whose given name was Oscar James Gibson, was 69 years old.
Mr. Marchan's biggest hit, "There Is Something on Your Mind," was a No. 1 rhythm and blues single in 1960. As a member of Huey Smith & Clowns, he sang on the hits "Don't You Just Know It," "You Don't Know Yockomo," and "Havin' A Good Time."
"Bobby was just a character -- he would do anything," said singer Frankie Ford, who imitated Mr. Marchan's vocal style early in his own career and scored a hit with the Huey Smith song "Sea Cruise."
"I learned from him. He always looked like he was having fun, like Fats Domino and Frogman Henry."
Mr. Marchan was born in Youngstown, Ohio (April 30, 1930), where as an adolescent he became fascinated by female impersonators who performed in local theaters. He began appearing in drag as a comedian and singer. In 1953, Mr. Marchan organized a troupe of female impersonators called "The Powder Box Revue" that was booked at New Orleans' Dew Drop Inn for several weeks. Finding the city's relaxed temperament to his liking, not to mention the ample opportunities to work as an entertainer, Marchan relocated, renting a room above the Dew Drop.
In 1954, Marchan became the master of ceremonies at Club Tijuana, where he was discovered by Aladdin Records' Eddie Mesner, who was impressed by Marchan's sophisticated blues style. He later recorded for Dot before beginning a long and successful association with Ace Records.
"I was working at the Club Tijuana in 1956, when Huey Smith brought in (Ace Records') Johnny Vincent," Marchan said in 1998.
"I was a singer, emcee and female impersonator. (Vincent) thought I was a woman. "Johnny said he liked my singing and wanted to record me. He gave me $200 and I signed his contract. A couple of days later we got to Cosimo Matassa's (studio) and Johnny still thought I was a woman because I was dressed in drag. Huey and everybody else was cracking up because Johnny was treating me and talking to me like I was a woman. Finally, Huey told Johnny I was a man and he just about fell on the floor from a heart attack."
Mr. Marchan's first taste of success was in 1956 with the release of "Chickee Wah-Wah," which was a regional hit. He and Smith joined forces in 1957 to form The Clowns. As Huey "Piano" Smith & Clowns, they recorded some of New Orleans' most memorable rock and roll.
"I was the group's boss," Mr. Marchan said. "When we first went on the road, Huey went with us, but after a few months he stayed home and concentrated on writing and doing sessions. I hired (pianist) James Booker to take his place because he sounded like Huey."
After Mr. Marchan left Ace and The Clowns, he went back on the road as a female impersonator. Eventually he contacted Fire Records' Bobby Robinson about recording the Big Jay McNeely song "There Is Something on Your Mind." Mr. Marchan's version hit No. 1 on the R&B charts. Mr. Marchan continued to cut R&B records for Fire, but they didn't chart.
In 1963, Otis Redding recommended him to Jim Stewart at Stax/Volt and Mr. Marchan began making the transition to contemporary soul. He later cut the original version of "Get Down With It," a hit for the British glam-rockers Slade in the 1970's.
By the mid-1970s, Mr. Marchan was living in Pensacola, Fla., and barnstorming the South again as a female impersonator-bandleader. In 1977, he returned to New Orleans as emcee at Prout's Club Alhambra.
In the 1980's, Mr. Marchan began appearing annually at the New Orleans Jazz & Heritage Festival and presenting gong shows at local clubs. A bout with cancer and the removal of a kidney in the early 1990's cut down his performing, but he remained active in the music business. He started Manicure Productions, a company that scouted, promoted and booked hip-hop acts, and was also a key figure in the formation and success of Cash Money Records.
Mr. Marchan's last public appearance was at the 1999 Essence Music Festival.