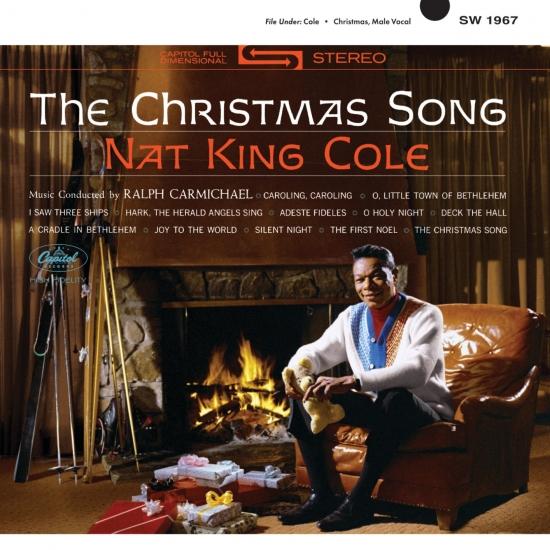 Info for The Christmas Song (Remastered)

In early May of 1946, the King Cole Trio, with guitarist Oscar Moore and bassist Johnny Miller, was appearing at The Trocadero in Hollywood. One night after the last set, a then 21-year-old Mel Torme came up to the bandstand and told Nat Cole that he had a new song that he was eager for him to hear. After the last few customers left, Mel sat down at the piano and performed “The Christmas Song” for Nat and the guys. Nat loved it immediately and he sat down at the piano and ran it down a couple of times. Years later, Nat told me that it was that very night that Oscar Moore played the “Jingle Bells” coda. Interestingly, Nat used this same ending every time he recorded the song.
As much as Nat liked the song, he told Mel that it would be wrong to record it with just The Trio, that it deserved a bigger showcase. Carlos Gastel, who was managing both Nat and Mel at the time, tried to persuade Capitol Records to use a few strings just for this one song. No luck. NO STRINGS!
On June 14, 1946 while appearing at Kelly’s Stable in New York, the Trio went into the studios of WMCA radio to record “The Christmas Song.” As soon as he heard the first playback, Nat knew it was wrong. He was determined to have his way; displaying a rare instance of stubbornness. Nat convinced Capitol to let him re-record it, this time with a string section.
On August 19, 1946 Nat went back into the same WMCA studio for his first-ever orchestral recording. By the way, the “string section” consisted of four string players, a harpist, and a drummer. A modest orchestral roster, to be sure, but a beginning, an augur of things to come for Nat Cole. The session turned out perfectly, and became a watershed recording in his career. Contrary to what many think, this was an entirely new session, not just the addition of some strings to the June 14th date.
Nat’s first recording of “The Christmas Song” hit the record stores (remember them?) the third week of November 1946, and the response was incredible. One week later it reached the #3 spot on pop, and rhythm and blues charts, an uncommon crossover, and a portent of what would ultimately become Nat’s boundless appeal. This was the recording that Capitol reissued every holiday season for the next 7 years, and each year it would chart in the top 5. Any wonder that Capitol Records was elated?
In August of 1953, Nat recorded it again, this time with Nelson Riddle conducting, and, of course, with many more than four strings. This version was reissued for the next 8 years. Then, on March 30, 1961 he recorded the stereo version with Ralph Carmichael conducting. This is the last time he recorded it, and to the present time, this is the rendition that Capitol reissues regularly. Given that the song is
seasonal, it had no such restraints where Nat’s fans were concerned. It always blew me away to hear someone from the audience shouting, “The Christmas Song…The Christmas Song.”
The duet with daughter Natalie, so brimming with love and devotion, was recorded in July of 1998 in England with the London Symphony Orchestra. I’ve often conjured up a vision of this huge orchestra in London’s Abbey Road Studios, standing by for the downbeat and Natalie looking up and saying, “Dad, you always wanted more strings. Well, this is really more strings!”
2011 marks the 65th year that we’re treated to Nathaniel’s classic recording, and it remains, by far, the most-played of all Christmas records. The original 1946 recording was inducted into The Grammy Hall of Fame in 1974.
Merry Christmas, and enjoy the magic of the Season.
Nat King Cole, piano, vocals
Oscar Moore, guitar
Johnny Miller, bass
Digitally remastered

At The Sands Live

Nat King Cole
Born March 17, 1919 in Montgomery, Alabama, Nat King Cole reigns among a very short list of music royalty as one of the most identifiable and most memorable voices in American music. In 1942, Cole was one of the first artists to sign with Capitol Records, and he recorded nearly 700 songs for the label, becoming the first Number One artist on Billboard's first album chart. During his 30-year recording career, Cole recorded more than 150 charting singles on Billboard's Pop, R&B and Country charts, a staggering record that remains unbroken by any other artist ever signed to Capitol Records, which led to the label being affectionately tagged, "The House That Nat Built."
In 1956, Cole also became the first person of color to host his own national network television show, NBC's "Nat King Cole Show." 1965 saw the release of Cole's classic album, Unforgettable, and his untimely passing that year at the age of 47. At the time of his death, it was reported that Capitol Records had sold more than nine million Nat King Cole records. From "Mona Lisa" to "Unforgettable," Nat King Cole's songs are incomparable; it is difficult to contemplate a holiday season without the warmth of Cole's evergreen rendition of "The Christmas Song." Cole's catalog continues to sell in excess of one million albums per year around the world.
In January 2005, Nat King Cole made his first return in 40 years to Billboard's Top 50 with the #41 debut of The World Of Nat King Cole (Capitol/EMI). Cole's last album to reach the Top 50, Unforgettable, peaked at #30 in 1965. In 1991, Natalie Cole's Unforgettable: With Love, featuring her warm virtual duet of "Unforgettable" with her father, topped charts around the world and won the coveted Album Of The Year Grammy Award, introducing Nat King Cole to a new generation of music fans.
For the March 2009 release of Nat King Cole's RE:GENERATIONS (Capitol/EMI), many of the world's most pioneering hip-hop, Latin, reggae and rock musicians, producers and DJs joined together to bring each of their distinct styles to 13 of Cole's outstanding recordings. Evocative of a sleek and stylish metrolounge where music and the visual arts converge, RE:GENERATIONS honors Nat King Cole's continued cultural influence around the planet, 90 years after his birth.
Interest in Nat King Cole's story continues to grow as younger generations discover his music as well as his role as the quiet catalyst in a host of musical and social movements. The arc of Cole's life is a study in success despite adversity, and the triumph of civility, respect and raw talent in equal measure with political, cultural and business savvy.