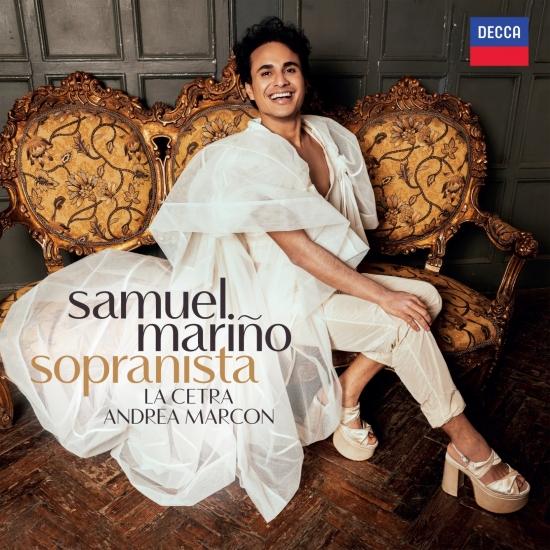 Decca Classics is thrilled to announce the signing of Samuel Mariño, the sensational Venezuelan male soprano.
As a teen, Mariño was bullied for his high speaking voice. Now his voice has taken him around the world with a sparkling opera career underway and his first album on a major label to be released on 27 May. With his music, Mariño hopes to spread a message of acceptance and self-expression.
Mariño is already becoming renowned for the beauty and brilliance of his remarkable voice, with Opera magazine commenting, “Quite simply the most extravagantly talented male soprano I have yet heard”. His gender-defying performances have helped him connect, not only to passionate opera lovers, but also with audiences new to the artform and those seeking representation. As Mariño explains,
“Whether someone feels like a man, a woman, non-binary, I want people to make music. When I wear a dress and make-up on stage, I do it because I love fashion and it’s a statement. I get messages from transgender people who say thank you so much for being on stage like this. This encourages me to continue to make this art that I love so much.”
On his new album, entitled Sopranista (meaning male soprano), Mariño sings music that dates back to a time when gender norms in opera were in many ways more nuanced and fluid. Here Mariño performs arias written for the celebrated male “castrato” singers from the days of Mozart and Gluck, which have largely been sung by female voices in the centuries since castration was banned. The album opens with the famous Cherubino aria from Mozart’s The Marriage of Figaro, with deliberate gender-blurring themes, in which a female singer sings the role of a boy. Many of these pieces have never been recorded by a male soprano until now.
Mariño has been contacted by a number of musicologists eager for him to try his hand at arias written for male sopranos that had been neglected for centuries. On his debut Decca album Mariño gives works written in the 1780s, by Joseph Bologne and Domenico Cimarosa, their world recording premieres.
In his teenage years Mariño asked his mother to take him to a specialist voice doctor. The doctor offered him surgery to lower his larynx and deepen his voice, but he also suggested that Mariño consider forgoing surgery. He mentioned the value of a having a high male voice in the realm of classical singing, telling Mariño about the countertenor vocal tradition. Mariño took his advice, kept his unique voice, and went on to study singing at the National Conservatory in Caracas.
There, his singing teacher spotted his potential and insisted Mariño move to Europe to continue his vocal studies, supporting himself selling lemon pies in his mother’s bakery in Caracas and then working at Disneyland in Paris. Mariño attended the Conservatoire de Paris before winning numerous opera awards and making his stage debut at the Handel Festival in Halle. He makes his London debut with a highly anticipated recital at St Martin-in-the-Fields on 22nd April. This spring, Marino also makes his Japanese debut in a series of Gala Concerts for Cartier at Daigo-ji Temple in Kyoto with Xavier de Maistre on the 7th, 9th and 11th of April.
Laura Monks and Tom Lewis, co-presidents of Decca Records, say, “As a teenager and despite the bullies and crushing pressure to conform, Samuel found the strength to stand out. As a result, he has travelled the world, charmed the musical world and become a extraordinary inspiring role model for acceptance and understanding. When Samuel sings, he transports you to another world. He is quite literally one-of-a-kind!”
Samuel Marino, soprano
La Cetra Barockorchester Basel
Andrea Marcon, conductor 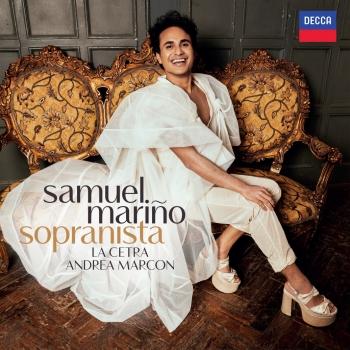