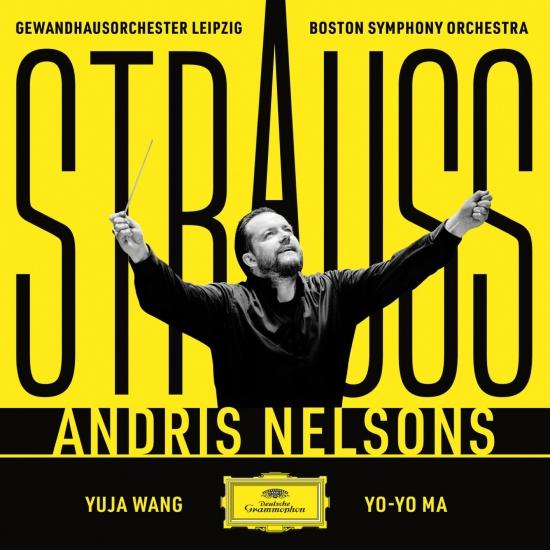 Two world-class orchestras, a visionary conductor and one of the most important composers in music history: the new album and tour project by Andris Nelsons, the Gewandhausorchester Leipzig and the Boston Symphony Orchestra is a musical meeting of superlatives. With the participation of Yuja Wang (Burleske) and Yo Yo Ma (Don Quixote), the two orchestras and their joint principal conductor present all the great symphonic works by Richard Strauss in one album and on tour. Each of the orchestras arranged three of the albums; on the seventh, they can not only be heard alternately, but even together with the Festliches Präludium.
The program is: Eine Alpensinfonie; Die Frau ohne Schatten Symphonic Fantasy; Don Quixote; Interludes from Intermezzo; Tod und Verklärung; Symphonia Domestica; Ein Heldenleben; Macbeth (BSO), Also sprach Zarathustra; Aus Italien; Don Juan; Burleske; The Dance of the Seven Veils from Salome; Metamorphosen; Till Eulenspiegel; Liebesszene from Feuersnot; Suite from Der Rosenkavalier, and Waltz from Schlagobers (Leipzig). Missing are the rest of the Schlagobers ballet, The Bourgeois Gentilhomme Suite, the Couperin Divertimento, and the other concertos.
"This joint Strauss project is a matter close to my heart," says Andris Nelsons. "It has given me hope and comfort in recent years. The music of Richard Strauss - its enormous emotional range, its extraordinary narrative qualities, and its undeniable place in the advancement of classical music - means an immense amount to me, and I am deeply grateful for the opportunity to share it with our audiences in Boston and Leipzig, as well as with music lovers in Europe and around the world. The partnership between the Boston Symphony Orchestra and the Leipzig Gewandhaus Orchestra is a dream come true for me, and I am immensely grateful to my esteemed colleagues in both orchestras and at Deutsche Grammophon for all their efforts in making this unique and complex project a success. We hope that these special recordings will bring joy and inspiration to our listeners."
Andris Nelsons is one of the most sought-after conductors of our day. As the leader of two top orchestras, the Latvian-born conductor is musically at home on several continents. On the one hand, there is the Boston Symphony Orchestra, which is not only one of the "Big Five" in America, but is also considered one of the best orchestras in the world. In addition, Nelsons has been Gewandhauskapellmeister in Leipzig since 2018 - following in the footsteps of Felix Mendelssohn Bartholdy, among others.
Yo-Yo Ma, cello
Yuja Wang, piano
Michael Schönheit, organ
Boston Symphony Orchestra
Gewandhausorchester Leipzig
Andris Nelsons, conductor 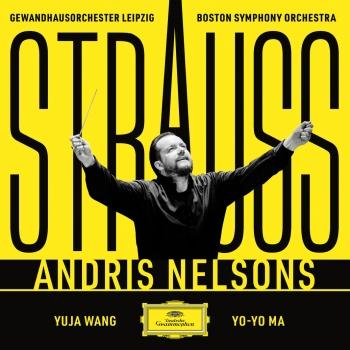 Andris Nelsons
is Music Director of the Boston Symphony Orchestra and Gewandhauskapellmeister of the Gewandhausorchester Leipzig. These two positions, in addition to his leadership of a pioneering alliance between both institutions, have firmly established Grammy Award-winning Nelsons as one of the most renowned and innovative conductors on the international scene today.
Nelsons began his tenure in Boston in the 2014/15 season, and his position in Leipzig in February 2018. With both orchestras Nelsons continues to embark on highly acclaimed international tours. Autumn 2019 marked a groundbreaking highlight for Nelsons, the Boston Symphony Orchestra and the Gewandhausorchester: following guest performances by the Gewandhausorchester as part of the BSO’s subscription series in Boston, three performances featuring musicians from both institutions within one joint orchestra were given at Boston’s Symphony Hall as part of the alliance between the two orchestras.
This 2020/21 season, Nelsons looks forward to returning to the Berliner Philharmoniker and Symphonieorchester des Bayerischen Rundfunks. Other orchestras Nelsons has established regular collaborations with throughout his career include the Concertgebouw in Amsterdam, and the Wiener Philharmoniker, with whom he conducted the prestigious New Year’s Day concert in 2020, broadcast to millions across the world. Furthermore, in celebration of Beethoven’s 250th anniversary, the Wiener Philharmoniker and Nelsons presented a cycle of Beethoven’s symphonies on tour last season at the Philharmonie de Paris, Philharmonie am Gasteig in Munich, and Hamburg’s Elbphilharmonie. Nelsons has also enjoyed conducting as a regular guest at the Royal Opera House in Covent Garden and at the Bayreuther Festspiele. Andris Nelsons has an exclusive recording relationship with Deutsche Grammophon, which has paved the way for three landmark projects with the Boston Symphony Orchestra, the Gewandhausorchester Leipzig and the Wiener Philharmoniker. Nelsons and the BSO partner on recordings of the complete Shostakovich symphonies and the opera Lady Macbeth of the Mtsensk District. The cycle, already recipient of four Grammy awards in the categories Best Orchestral Performance and Best Engineered Album, releases its fifth instalment this season. Furthermore, Nelsons and the Gewandhausorchester continue their critically acclaimed Bruckner symphonic cycle under the Yellow Label, and also releases its fifth instalment this season. Nelsons’ recordings of Beethoven’s complete symphonies with the Wiener Philharmoniker were released by Deutsche Grammophon in October 2019.
Born in Riga in 1978 into a family of musicians, Andris Nelsons began his career as a trumpeter in the Latvian National Opera Orchestra before studying conducting. He was Music Director of the City of Birmingham Symphony Orchestra from 2008-2015, Principal Conductor of Nordwestdeutsche Philharmonie in Herford, Germany 2006-2009 and Music Director of the Latvian National Opera 2003-2007.
"Mr. Nelsons has brought a jolt of youthful energy, along with charisma and accomplishment [to the Boston Symphony Orchestra at Carnegie Hall]. The audience gave Mr. Nelsons and the players an enormous ovation. Whatever the future, for now the Boston Symphony has placed its trust in a young dynamo." (The New York Times)