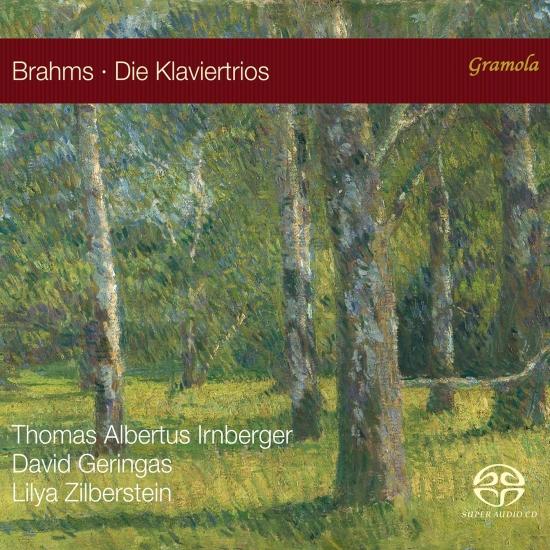 For this complete recording of Johannes Brahms' piano trios, the internationally successful Salzburg violinist Thomas Albertus Irnberger chose his usual top-class ensemble partners. Irnberger has long had an intense artistic friendship with the versatile cellist David Geringas, who, like the Russian-born pianist Lilya Zilberstein, can point to a number of CD recordings that are as long as they are impressive. The Piano Trio No. 1 in B major op. 8 can be heard here in the revised version, which closes the time gap of almost 25 years to the other two trios (No. 2 in C major Op. 87 and No. 3 in C minor Op. 101), since the revision took place after the completion of these works and thus at the peak of Brahmsian compositional art. For the Trio for Clarinet, Violoncello and Piano in A minor Op. 114, Brahms envisaged the viola as an alternative instrumentation from the very beginning, which is mastered by Irnberger as brilliantly as the violin.
Thomas Albertus Irnberger, violin, viola
David Geringas, cello
Lilya Zilberstein, piano 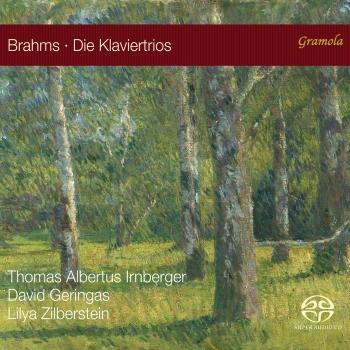 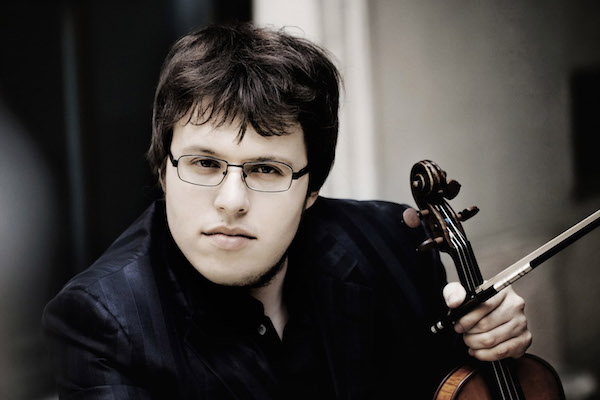 Thomas Albertus Irnberger
born in Salzburg, is among Austria’s leading violinists. The German specialist press wrote: “like hardly any other young artist in his field, in recent years Irnberger has secured himself a leading position amongst Europe’s violinist elite.” At the age of 15 in the Palais des Beaux Arts in Brussels he celebrated a debut that attracted widespread attention as the soloist in Tchaikovsky’s Violin Concerto.
Since then Thomas Albertus Irnberger has performed as a soloist and chamber musician in major concert halls in Europe, Israel and in Asia, for instance in the Herkulessaal in Munich, the Konzerthaus Berlin, the Beethovenhalle in Bonn, the “Glocke” in Bremen, the Laeiszhalle Hamburg, the Stadthalle in Karlsruhe, the Meistersingerhalle Nuremberg, the Liederhalle Stuttgart, the Fairfield Hall London, the Museum of Art, Tel Aviv, the Henry Crown Auditorium, Jerusalem, the Rebecca Crown Auditorium, Jerusalem, the Heichal HaTarbut, Rishon LeZion, the Théatre des Champs-Elysées, Paris, the Casals Hall, Tokyo and in the Musikverein in Vienna.
He has been a guest at renowned international festivals such as for example, the “Festivals internationales de Violon – Signé Ivry Gitlis” in France, the Mahler-Festival Toblach/Dobbiaco, the Weilburger Schlosskonzerte, the Menuhin Festival Blonay, the Karel Halír Festival Prague, the Bruckner Fest Linz etc.
At the age of 17 his debut double CDs featuring works by Hindemith, Debussy, Enescu, Paganini, Kreisler, Fauré and Elgar was released by Pan Classics and received excellent critiques in the specialist press in which his “brilliant technical ability combined with a mature creative power and sophisticated sound”, his “differentiated tone colours”, and his “assured feeling for style” were singled out for praise.
In 2004 he signed an exclusive contract with the established Vienna label Gramola and built up a notable and much acclaimed discography. In 2022 this artist will present his 62nd CD recording.
His recordings have regularly been the recipients of prizes and top rankings from the international press: American Record Guide – Critic’s Choice, Supersonic Award – Luxembourg, Opus dʼor – Paris, Choc de musique –Paris , top recording on several occasions (10 stars) at Klassik heute – Germany, 5 stars in Ensemble Magazine – Germany, several recommendations by Crescendo magazine – Germany, nomination for the Amadeus Classic Award 2006, Strad Selection – London, Gramophone recommendation – London, Oe1-CD of the Day and of the Month, Oe1 Pasticcio Prize, CD des Tages plus at Radio Stephansdom (Radio Klassik), Radio-Bremen recommendation, Grand prix du disque – honorary diploma Franz Liszt 2012, ION Arts Washington “10 worldʼs best classic CDs 2011”, Fanfare Magazine recommendations – New York, American Record Review – Recommendations, The Record Geijutsu – Tokyo etc …CD of the week at the Bayrischer Rundfunk, MDR – Figaro, SWR and WDR, Radio Toscana and Radio Bolzano etc …
His regular chamber music partners include such noted figures as Paul Badura-Skoda, Jörg Demus, Michael Korstick, David Geringas, Barbara Moser, Pavel Kašpar and Edoardo Torbianelli. Since 2008 Thomas Albertus Irnberger has devoted himself to research into and the rediscovery of “ostracised composers” and in Israel he played the first performance of the violin concerto by Hans Gál. Enthusiastic critics wrote in this regard: “Music that represents a revelation”. A further focal point of his work together with Barbara Moser is the wide field of music by female composers which, unjustly, does not yet enjoy the status it deserves.