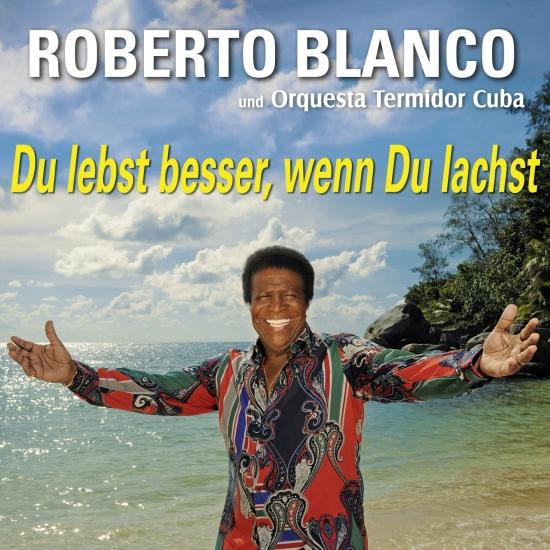 Salsa sounds, inspired by Roberto Blanco’s Cuban roots, show this most popular artist from a different side. Fifteen tracks, eight of which are covers of hits by various stars such as the legendary Charles Aznavour (La Terre Meurt), Chris Rea (Fool), the South African star Solomon Linda (The Lion Sleeps Tonight), the Mexican star tenor Agostin Lara (Granada) and the Italian singer-songwriter Lucio Dalla (Carusso). To pay due tribute to this broad repertoire, on Du lebst besser wenn du lachst, Roberto Blanco sings in English, German, Spanish, French and Italian: and everything with a refreshing Latin American fair, accompanied by knife-sharp, typically Cuban, wind instruments, percussion and virtuoso piano.
The latter is a prime example of the spirit of this album: for some of the songs, Roberto was accompanied by that Cuban founder of Irakere, winner of several Grammies: Chucho Valdés, one of the best jazz pianists in the world. As musicians do, they “wanted to try something out together.” When Roberto Blanco visited Cuba, where the album was to be recorded (Blanco: “We couldn’t have recorded it anywhere else.”), they met by chance when they were exchanging currency at the Hotel Meliá Cohiba. Valdes had just returned from a world tour, was exhausted and had a heavy cold. He was on the verge of saying no, when he saw the same Oshun chain around Blanco’s neck as he wore himself: Oshun is the patron saint of Cuba. “Roberto, we’re brothers,” he cried. And he couldn’t turn down a brother’s request. A few hours later the two were in the studio. Valdes hardly looked at the score: he just started off playing. First the four agreed tracks. Then a fifth, because Valdes didn’t want to stop. If Roberto Blanco had stayed in Cuba a bit longer, they would have made more. So now Du lebst besser wenn du lachst has turned out to be an album full of heart, love, soul and musical joy, with great new compositions and equally great interpretations of well-known tracks- as we would expect from a genuine entertainer, whom Josephine Baker once took on at a moment’s notice to join her on a concert tour. 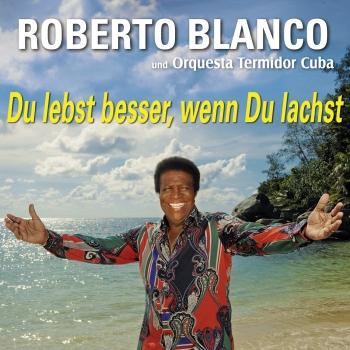