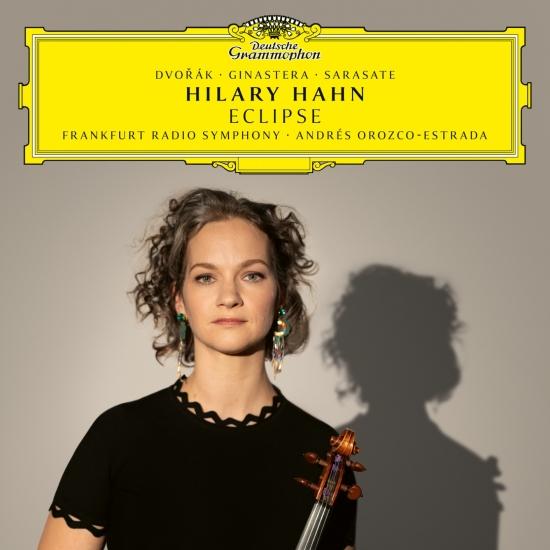 "The brand new album from the three-time Grammy Award-winning violinist Hilary Hahn. Her most personal album to date, recorded immediately after lockdown, the album was recorded with the Frankfurt Radio Symphony and Andrés Orozco-Estrada, and features Dvořák’s and Ginastera’s Violin Concertos as well as Sarasate’s Carmen Fantasy.
“This album is my return after an extended time out of the spotlight. Rediscovering my voice felt like the time following an eclipse; artistic evolution can come from many sources, but it is often set in motion by big events that bring about a change of perspective and reveal one's true self.” (Hilary Hahn)
Hilary Hahn’s latest album, Eclipse, celebrates the power of authenticity. Recorded with the Frankfurt Radio Symphony and its Music Director (2014-2021), Andrés Orozco-Estrada, it sees the triple Grammy-winning violinist deliver interpretations of three works charged with universal emotions yet rooted in their composers’ musical heritage: Dvořák’s Violin Concerto, a tour de force from the Czech composer’s “Slavic period,” Ginastera’s Violin Concerto, a strikingly original 20th-century gem, and Sarasate’s Carmen Fantasy, among the greatest virtuoso showpieces of all time. “This recording tells stories I didn’t understand until I returned to the stage after a long hiatus: the elation of coming into one’s own, the declaration of an artistic identity, and what it means to regain your native language through music,” says Hahn.
The album marks a series of musical milestones for the violinist. She has long loved the works it contains and discovered fresh insights and details of expression as she recorded each of them for the first time. Eclipse also reflects Hahn’s close collaboration with the musicians of the Frankfurt Radio Symphony (in their home city and on tour) and her extensive partnership with Maestro Orozco-Estrada. Above all, it documents her return to recording, following a year-long sabbatical and many additional months of artistic solitude.
Hahn experienced intense personal evolution during her time away from the stage. After waves of canceled concerts and extended solo preparation, she arrived in Frankfurt for the live-stream of Dvořák’s Violin Concerto, unsure of where her playing would lead her. With Orozco-Estrada and the Frankfurt musicians, Hahn returned to her truest form of expression, performing. In isolation, she realized, her musical identity had strengthened rather than waned. “When I got onstage for the Dvořák in April last year,” she recalls, “it was like a jolt of life, as if the world came rushing back in Technicolor.” Hahn and the Frankfurt Radio Symphony gave their first post-lockdown concert together in front of an audience two months later, during which their Ginastera and Sarasate performances were recorded live.
Alongside the joy of once again working with fellow artists, Hilary Hahn was captivated by the unique qualities of the works on Eclipse. All three composers featured on the album spent extended periods away from home – Dvořák and Ginastera in the United States, Sarasate almost permanently on tour – but remained in touch with their cultural roots even as they developed their own unique and multi-layered artistic voices.
Dvořák, a village butcher’s son raised in central Bohemia, incorporated the folk songs and dances he had heard as a boy in his mature musical language in defiance of the Austro-Hungarian Empire’s suppression of Czech culture and language. The Violin Concerto in A minor, Op.53, written between 1879 and 1882 for the great virtuoso Joseph Joachim, weaves folk-inspired themes typical of Dvořák’s Slavic period into the classical forms of sonata and rondo. It concludes with a stylized version of the furiant, a fiery Czech dance, part of what Hahn calls “a gigantic statement of human emotion.”
Ginastera’s Concerto was commissioned by the New York Philharmonic and first performed by them and Ruggiero Ricci under the direction of Leonard Bernstein at the newly-opened Lincoln Center in 1963. A native of Buenos Aires, Ginastera made his name in the United States during the 1950s with works that combined elements of traditional Argentinian music and edgy modernism. His Violin Concerto, composed during the chaotic years between Juan Perón’s 1955 deposal and the military coup of 1966, explores the infinite possibilities of variation within the form: Ginastera introduces a multitude of themes in its breathtaking opening solo cadenza and transforms them across three intricately crafted, absorbingly complex movements for violin and orchestra. The central Adagio is notable for turning the spotlight on the principal players of the orchestra, as well as the soloist. “I’ve been obsessed with the Ginastera for years,” notes Hahn. “It’s tantalizing and magical and weird. It’s a mix of all of the rawest feelings you can have as a human being, but in a format that is pure genius.”
Violinist-composer Pablo de Sarasate, born in Pamplona, gave the premiere of his hugely demanding Carmen Fantasy in Paris in 1883. The dramatic hit tunes of Bizet’s Carmen, a tragic tale of love and jealousy set in southern Spain, supplied Sarasate with the themes for a series of richly decorated episodes that distill the essence of the opera and its charismatic heroine. “My emphasis in this interpretation is to make the piece operatic, so you can imagine hearing the words and the story they tell,” comments Hahn. “It was a joy to work on it in Frankfurt with my wonderful colleagues.”
“I feel with this album like we made something powerfully beautiful together during a difficult time,” she adds. “When we played the final note of the Carmen Fantasy, I felt like I’d gone through a huge shift of perspective, through something really challenging, and emerged stronger as a person and a musician.” She compares this shift to the return of light that always follows an eclipse. “Artistic evolution can come from many sources, but it often comes from a big event. I am so happy that I can share this pivot, this landing, this merging of voices in the global language of music.”
Hilary Hahn, violin
Radio-Sinfonie-Orchester Frankfurt
Andres Orozco-Estrada, conductor 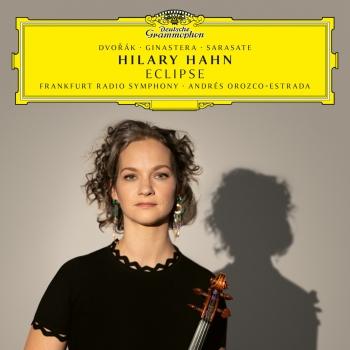 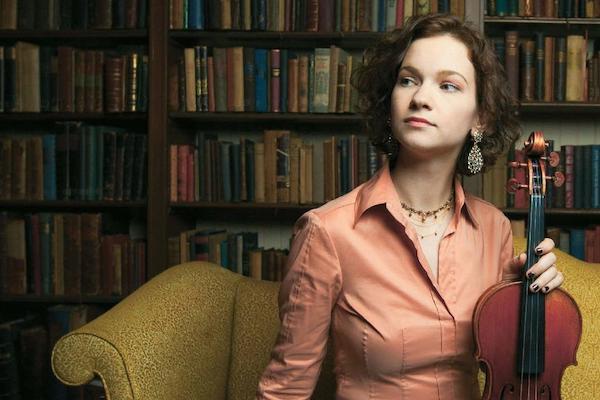