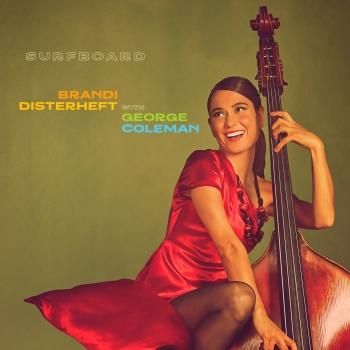 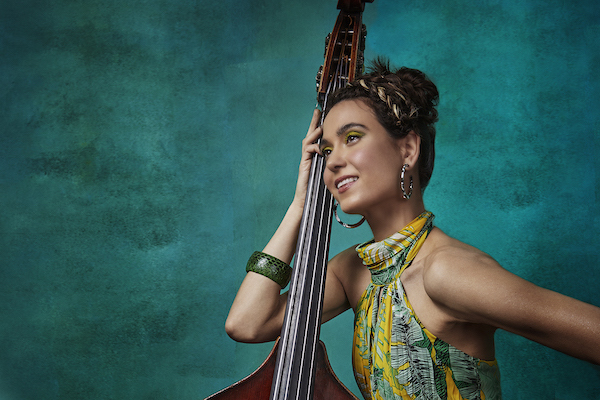 Brandi Disterheft
"She is what we call serious." (Oscar Peterson)
Jazz bassist Brandi Disterheft relocated to NYC to begin an apprenticeship under Miles Davis' bassist Ron Carter. It’s not only her fiery bass playing that make audiences stand-up and holler, but also her innovative live shows showcasing her uptempo, swinging originals and ambient voice. Her mother, a Chicago-born jazz B3 organist who opened for acts such as the Supremes and Carlos Jobim in the 1960's, trained Brandi's ears from the tender age of 5 when she began classical piano studies; yet, her Aunt Angie Jaree a GRAMMY WINNING session singer in LA (Claire Fischer, Sergio Mendez) encouraged Brandi to sing.
Winning a JUNO (Canadian Grammy) for her “Debut” album, Brandi had the honor to be the bassist for the legendary Hank Jones on the album “Pleased to Meet You” and has since captivated international audiences at jazz festivals in Japan, Haiti, Canada, Europe, USA and at prestigious venues including Carnegie Hall, and the Vienna Opera House. Recordings and performances include collaborations with top drawer musicians such as Anita O'day, Benny Green, Cyrus Chestnut, Vincent Herring and Renee Rosnes to name a few.
“She is quite the bass player, and I appreciate her expertise and talent. It was a great pleasure making an album together.” (George Coleman)
Brandi Disterheft’s fifth album, Surfboard is her most accomplished yet. Joined by two iconic octogenarian masters — virtuoso tenor saxophonist George Coleman and the definitive Brazilian drummer Portinho — and world-class pianist Klaus Mueller, Disterheft authoritatively and organically guides the flow on a varied program that reflects her capacious interests. Her kinetic, harmonically erudite basslines anchor ensemble interpretations of choice tunes culled from the blues, mainstem jazz, and the Great Brazilian and American Songbooks. She sings those Songbook numbers, and her own evocative lyrics, with an instantly recognizable voice that conveys vulnerability and emotional intelligence. And she matches the high bar set by her partners on a series of creative solos. Surfboard will be available worldwide on October 30, 2020 via Justin Time.
The project gestated in Disterheft’s decade-long musical relationship with Portinho, whom she met through Mueller soon after she moved to New York from Canada in 2010. Their simpatico developed during years as a working band, on numerous Canadian concerts led by Disterheft and Portinho’s five-sets-a-night weekend sinecure at a Brazilian churrascaria in Manhattan.
“I wanted to record us,” she says. “Porto has a way of uplifting the beat. It’s so funky, with such an infectious groove, and he has so much dynamic range. He has strict rules, but once you learn them, he wants you to break away. He’s always anticipating, turning around the phrases. It’s so much fun.”
Coleman plays characteristically compelling solos on the standards “My Foolish Heart” and “Speak Low” and the leader’s own evocative “Coup de Foudre.” Disterheft connected with him through his lifelong friend and bandstand partner, the late pianist Harold Mabern, who — with A-list New York drummer Joe Farnsworth — partnered with her on the hard-swinging 2016, CD, Blue Canvas, and several subsequent tours. Like Portinho, she remarks, Coleman “loves to keep people on their toes,” adding, “He’ll change harmony at the drop of a hat.”
Disterheft’s harmonic erudition, soulfulness and intense individualism come through when she sings the jazz standard “Where or When” and the 60s pop hit “On Broadway.” “It depicts the reality of New York, a hard run for some folks when one thin dime won’t even shine your shoes,” she comments on the latter tune. “I related to ‘they say I won’t last too long on Broadway; I’ll catch a Greyhound bus back home.’”
The Vancouver native has first-hand experience with overnight Greyhound buses, which Disterheft frequently rode to visit New York during a long residence in Toronto, where she attended Humber College and gigged with — among other luminaries — pianist David Virelles. “It puts the gutbucket in your playing,” Disterheft says. You hear her blend down-home grit and highbrow finesse on personalized interpretations of canonic pieces by bass heroes Oscar Pettiford (“The Pendulum at Falcon’s Lair”) and Sam Jones (“Del Sasser”), and in her propulsive beat articulation on two “obscure, wonderful Brazilian tunes” that Portinho brought to her attention — Moacir Santos’ “Nanã” and the polyrhythmic “Surfboard,” a less-traveled Jobim number that titles this superb, engaging album.
“It sounds like you’re trying to balance life on a surfboard,” Disterheft says of the latter. “The audience lights up as soon as you play it.”